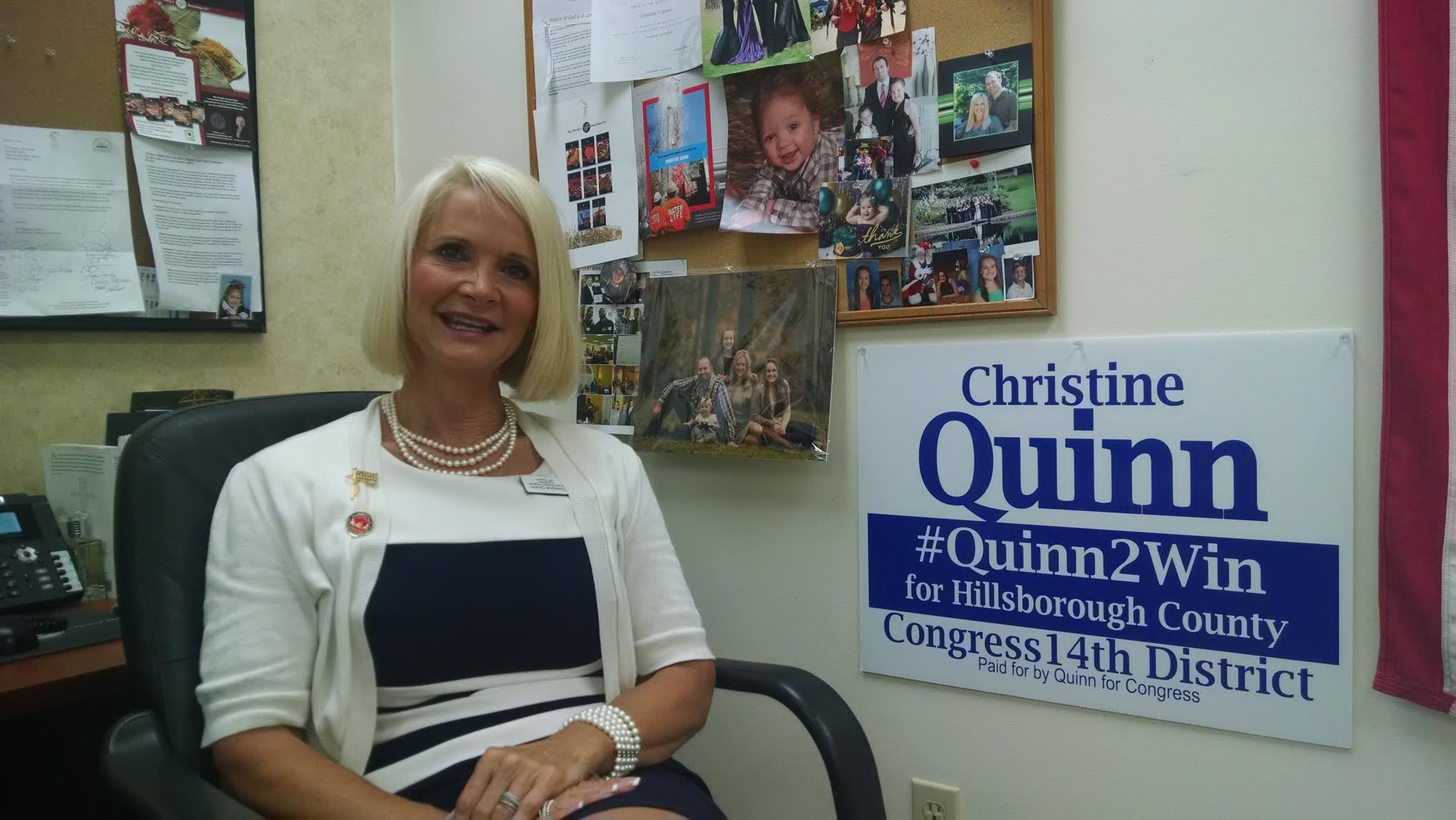 When conservatives claim the Democratic Party is anti-small business, they have no one better to champion that claim than Christine Quinn, the Republican businesswoman running against Democrat incumbent Kathy Castor in Florida’s 14th Congressional District this November.

The Southern California native created My Family Seasonings in 2005, which began with a prime rib seasoning from her mother’s secret family recipe. She then quickly adding seafood, hamburger, poultry, wild game and most recently a meatloaf mix to her company’s list of products, and she’s flourished ever since.

As her business grew, so did the regulations she says made it harder to conduct business in the Golden State. When some of her business allies began looking at Texas or Arizona as possible locations that would provide a better business environment, Quinn immediately began considering Florida, since Lakeland-based Publix supermarkets had become her biggest client. Other measures, like the state’s elimination of the sales tax that manufacturers pay when purchasing equipment in Florida, made the Sunshine State even more attractive to her.

So Quinn pulled up stakes and moved to Lakeland in 2014, where she relocated her headquarters and manufacturing facility. She says at one point she was prodded by Lakeland Mayor Howard Wiggs to consider running for the Polk County Commission, which got her thinking more about running for elected office. While that was happening, she decided she loved Tampa and could handle the commute, so she moved there.

In January she said she started to think about a run for Congress, emboldened by the Florida Supreme Court’s redistricting efforts last summer that made Castor’s 14th Congressional District in Hillsborough County (sans Pinellas) less formidable for a Republican. Most political analysts still consider her odds long, however.

Before making the decision, Quinn, 56, traveled to Washington, where she attended some briefings with the Heritage Foundation and the Conservative Political Action Committee, and literally walked the halls of Congress to speak to lawmakers about her thoughts about running for a seat in the House of Representatives.

When asked about immigration, Quinn says she’s not equipped to give a short, succinct answer. But when asked if she supports the wall Donald Trump has proposed along the U.S. Southern border, she backs that idea with enthusiasm, adding her fear is that the undocumented could be bringing over diseases that could compromise our health system.

“We’re also bringing in some very dangerous threats to the American health and safety of the American population at large,” she said. “Tuberculosis was almost completely eradicated in the ’80s. Now our safe haven cities, like San Francisco, have the highest rate of tuberculosis in the nation. It’s a very treatable disease, we have medications that can treat it, but it’s a silent killer because it’s airborne.”

The Centers for Disease Control does say on its website there is a risk of infection from people traversing from Mexico to the U.S., but doesn’t say it comes directly from undocumented immigrants. As PolitiFact notes, approximately 300 million legal crossings take place from Mexico into the United States annually along the 1,969-mile border, and about 15 million Americans visit Mexico each year, according to CDC, which notes that, “the sheer number of people who live, work, and travel between the United States and Mexico has led to a sharing of culture and commerce, as well as the easy transportation of infectious diseases. The large movement of people across the United States and Mexico border has led to an increase in health issues, particularly infectious diseases such as tuberculosis.”

Regarding Trump, Quinn is a big fan.

“That man IS the American dream,” she says triumphantly. “He was able to go to college. He does have military experience from being in a military school. He started a business — good for him. ” (It should be noted Trump received draft deferments through much of the Vietnam War, but he has said he “always felt that I was in the military” because of his education at a military-themed boarding school).

When asked about the issues between law enforcement and the black community and specifically the Black Lives Matter movement, she quickly responds that “all lives matter,” and then cites a study showing whites are killed by police officers at a greater percentage than blacks (she later said that came from a Guardian study, though that acclaimed study doesn’t necessarily say that).

Quinn vows “never” to compromise on the 2nd Amendment, but does say it’s extremely important for anyone who purchases a gun to get proper training. She also says she hopes to go for a ride-along with the Hillsborough County Sheriffs Department, adding that they hadn’t returned her call for such a ride.

On the Affordable Care Act, Quinn says she lost her insurance “because I didn’t qualify for the ACA. That’s not fair.” (Quinn’s campaign manager sent an e-mail Thursday with more information. “Christine said it went up, for her $840 plus for her son was another $432 and the deductible was $2,500. So ACA priced her out of insurance from the rate hikes. She didn’t qualify for ACA benefits.”)

“We didn’t get in fast enough,” she says regarding the invasion and the search for WMD, which began in March 2003. “Could they have moved them? We’re they really not there? How do we know? Maybe they really were there. I have a hard time believing that they weren’t there. I think that they were there, I think that we don’t get the full reports. We don’t know. We simply don’t know. We can speculate. We can have arguments on TV with all the newscasters and everyone can have their opinion. We needed to protect the oil, and if anyone wants to say we didn’t, of course we did.”

The New York Times did report in the fall of 2014 that during the Iraq war, at least 17 American service members and seven Iraqi police officers were exposed to aging chemical weapons abandoned years earlier, a report conservatives seized upon. Critics noted, however, that the chemical weapons discovered predated 1991 and thus could not vindicate Bush’s rationale, which relied on an active, ongoing chemical weapons program at the time of the invasion.

Quinn defers on what our policy should be regarding Syria at the moment. She segues into talking about her admitted lack of knowledge regarding the Muslim faith after 9/11 prompted her to read the Koran to learn more about the religion. While discussing this, she pulls out a paperback copy of the holy text from a drawer in her office. “How do we learn if we don’t read?” she asks.

Quinn caught a break when perennial candidate Eddie Adams failed to qualify for the ballot last month, earning her the GOP nomination by default, avoiding the added costs of a contested primary. Nevertheless, she’s a prohibitive underdog against Castor, who is vying for a sixth term in the House of Representatives.

The candidate did tweet to this reporter Thursday that, “I’m the only candidate and first BusinessWOMAN to run against Castor in Hillsborough County — critical to Florida,” but whether that will be nearly enough won’t be decided until November.