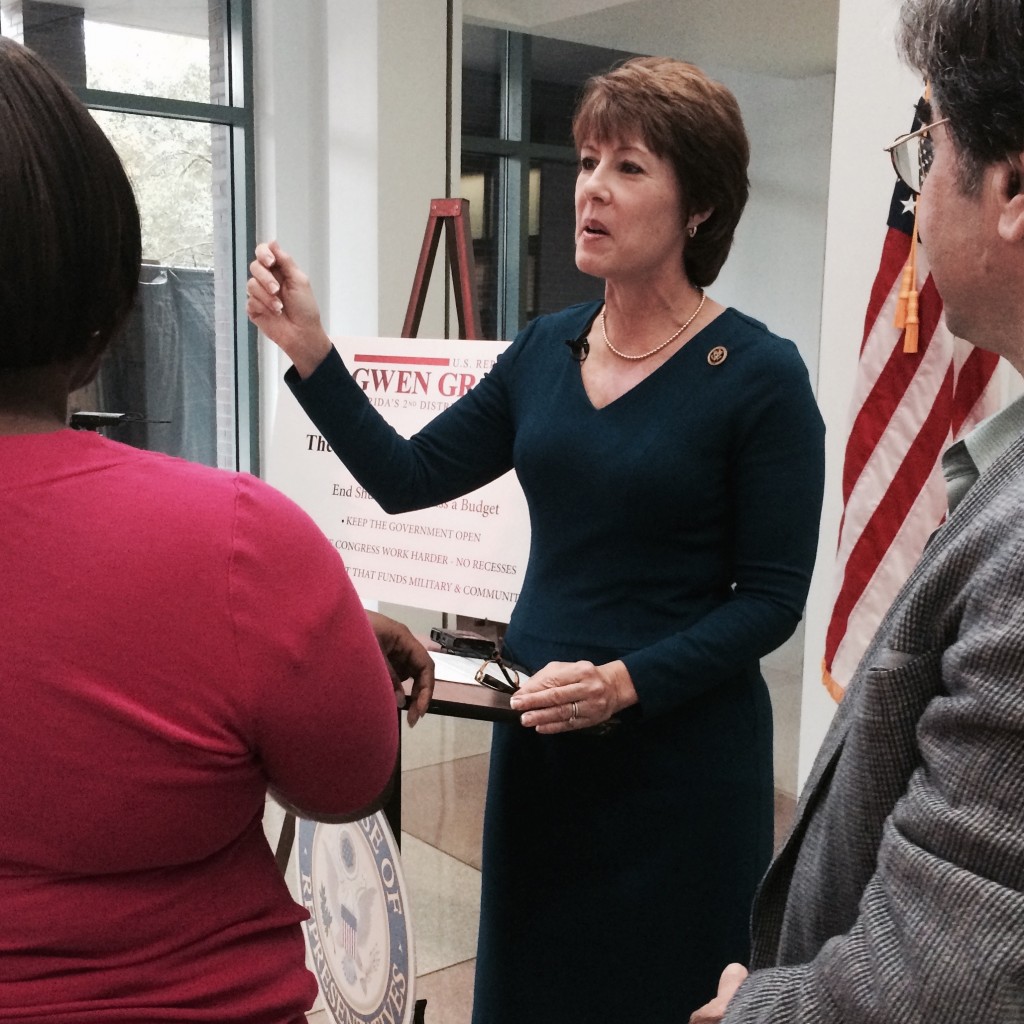 U.S. Rep. Gwen Graham is responding forcefully — with a call for a special session of the Florida Legislature — to a letter written by Florida Gov. Rick Scott regarding the federal government’s role in the developing crisis along the state’s Treasure Coast, where algae blooms are creating an emergency-level natural disaster.

Earlier this week, Scott wrote Reps. Vern Buchanan and Alcee Hastings, chairs of the Florida congressional delegation, insisting the federal government needs to do something to help the state, including funding the maintenance and repair of the Herbert Hoover Dike.

”Florida is without a doubt the most beautiful state in the country with some of the world’s most incredible natural treasures. We need your help in protecting these natural treasures and the millions of Florida families who are being impacted by potentially harmful algal blooms,” wrote Scott in the letter.

“Please utilize your position in Congress to take immediate action by working to ensure Florida receives the federal emergency declaration and that the federal government fund the maintenance and repair to the federally operated Herbert Hoover Dike. These repairs would safely hold water to prevent unnatural Lake Okeechobee discharges that are leading to the increased formation of algae,” Scott added.

While Scott was overtly appealing to the congressional delegation in an attempt to secure federal action, at least one delegation member recoiled.

Graham writes she is “disappointed to see that, instead of advocating comprehensive solutions to this disaster,” Scott’s letter blames President Barack Obama and advocates only a partial solution — maintaining and repairing Lake Okeechobee’s Herbert Hoover Dike.

Graham spoke to a number of stakeholders — the Indian Riverkeeper and business owners on the Treasure Coast — and claims they are “frustrated with [the] state government and hungry for [Scott] to show leadership on this issue.”

The algae bloom, writes Graham, is yet another data point in a troubling pattern.

After advancing the idea that Scott could be the first governor in modern times who “actively worked to harm Florida’s environment,” Graham offered a call to action, with four tangible steps Scott could take to atone for his neglect of Florida’s natural resources.

The first step: to call a special session of the Legislature, focused on “short- and long-term solutions to improve our water quality and prevent future algae blooms,” channeling the “bipartisan outrage” into “real solutions” to the current crisis.

The second step: to replace “political appointees” on the Southwest Florida Water Management Board with “scientists, engineers, and conservationists.”

“Our government shouldn’t place a developer in charge of protecting our water,” Graham wrote.

The third step: work with the Legislature and local governments to clean up and replace failing septic tanks. A special session, wrote Graham, would allow for legislative “focus on this issue while the waters are still green.”

The fourth step, meanwhile, involves following through on Amendment One, to use money to buy land “south of the lake and restore the river of grass to the Everglades.”

“We must restore Florida’s water flow to the way God and nature intended,” wrote Graham, “by sending the water south.”

Strengthening the dike, wrote Graham, isn’t the answer. A tropical storm could result in the Army Corps of Engineers having to release millions of gallons of water into the Indian and Caloosahatchie Rivers. And if a storm were to hit the lake directly, Graham added, an “even greater natural disaster” could result.

“Passing the buck to the federal government isn’t the answer,” Graham wrote in her concluding paragraph, before committing to help Gov. Scott “and any other leader end this crisis.” 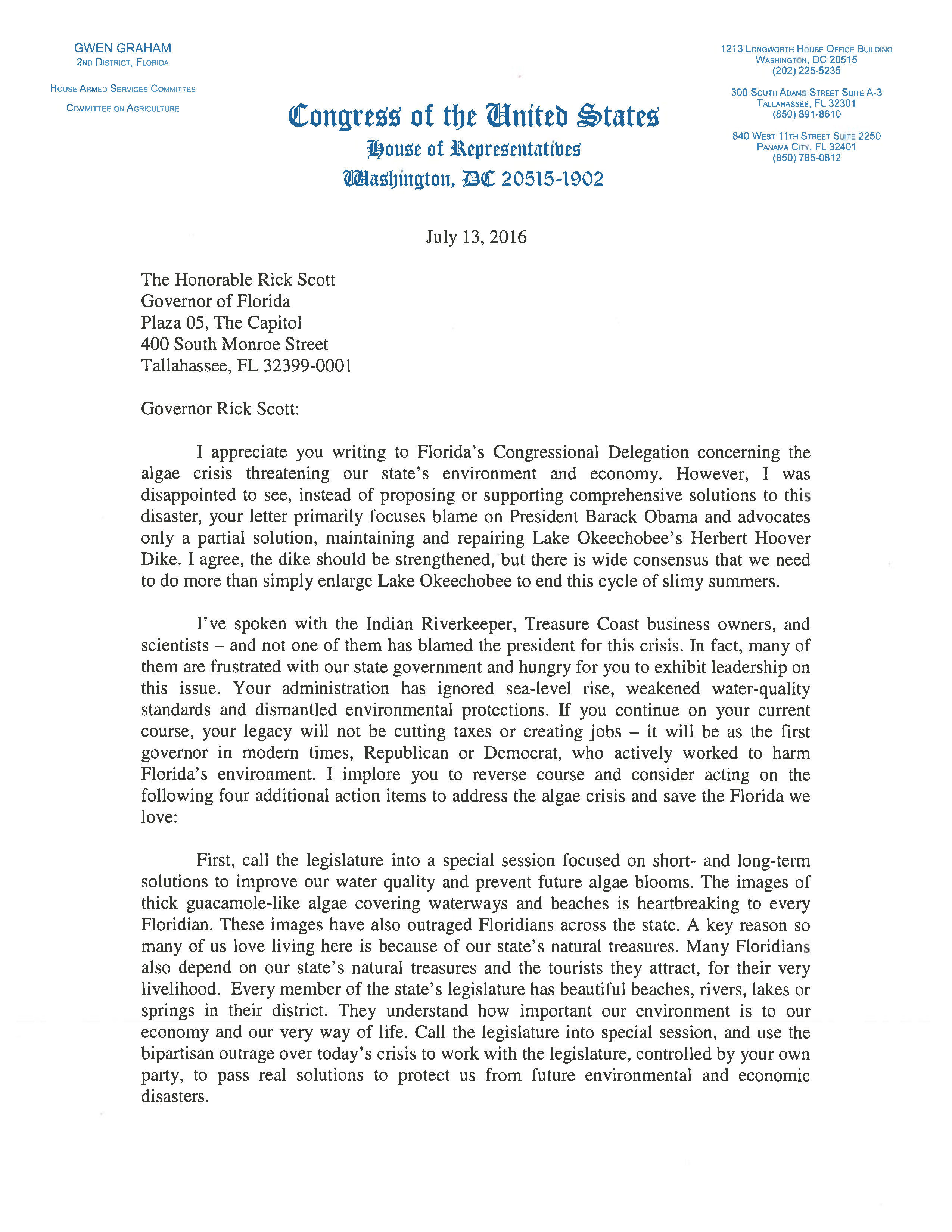 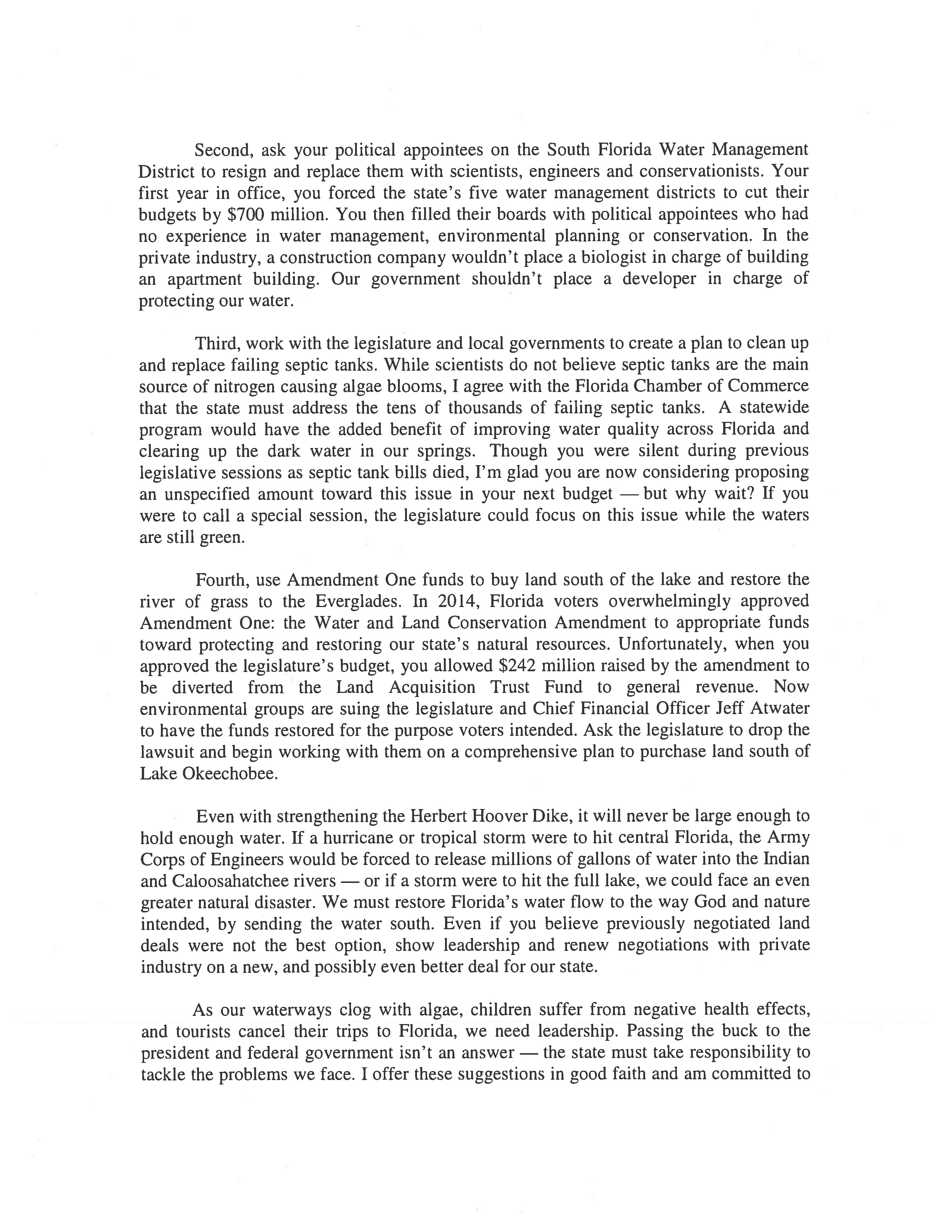 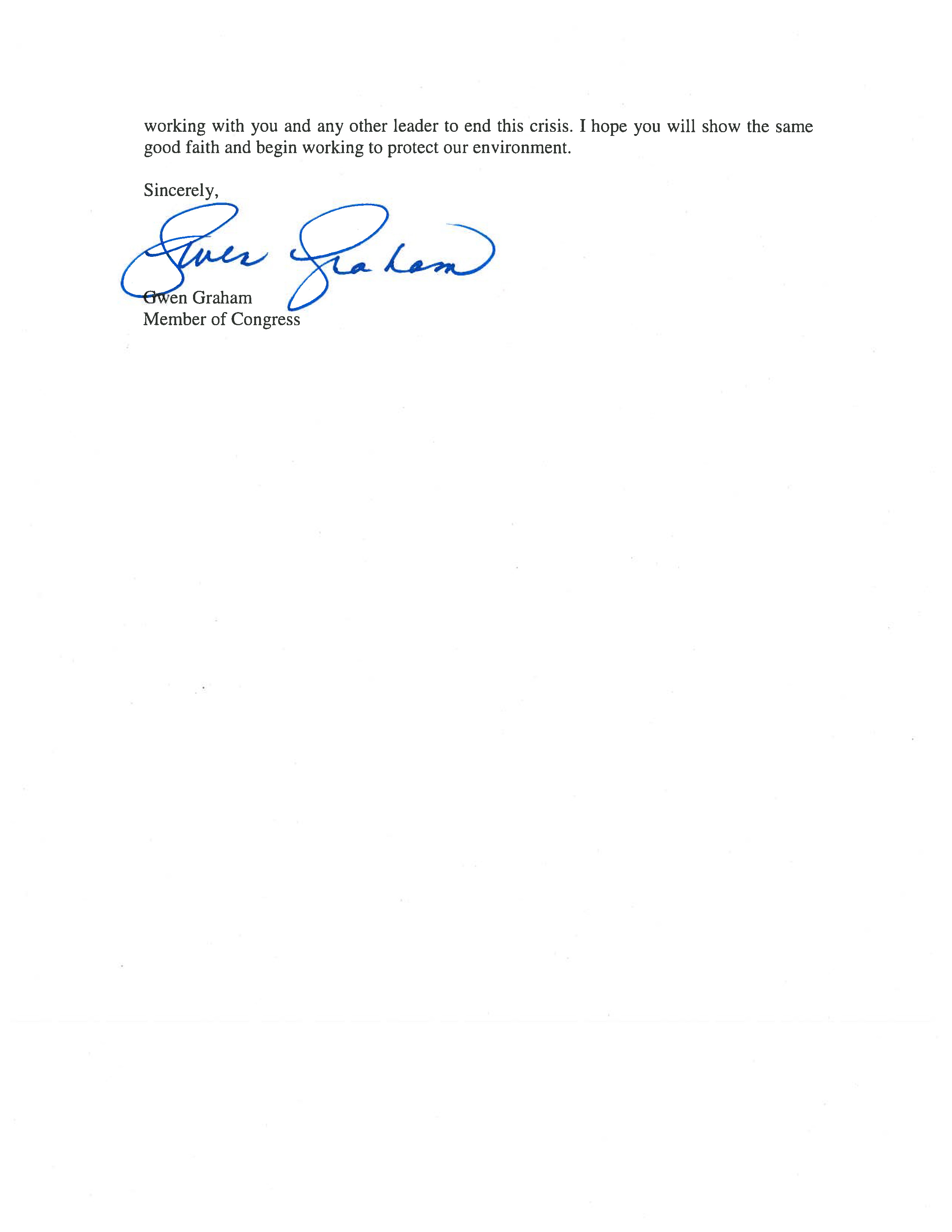 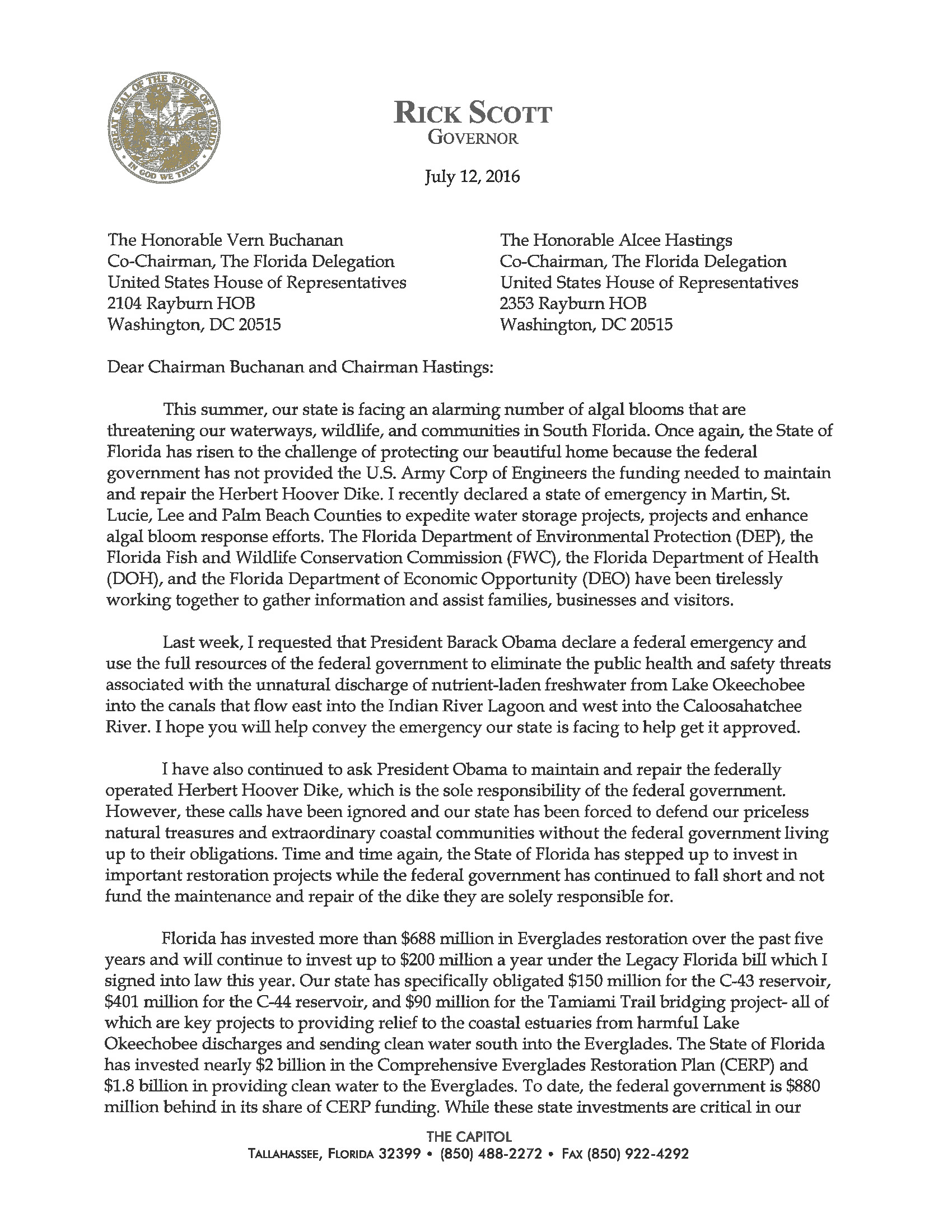 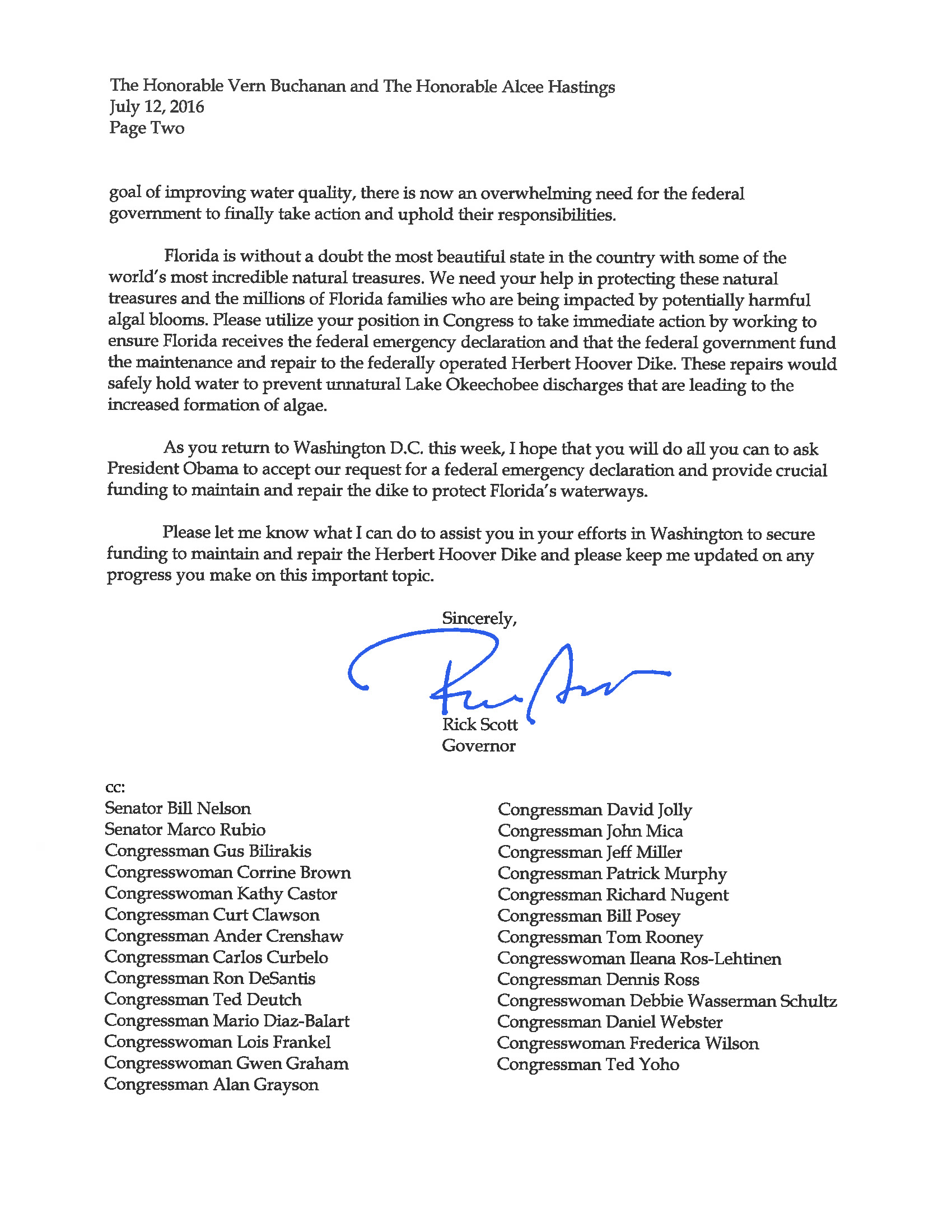