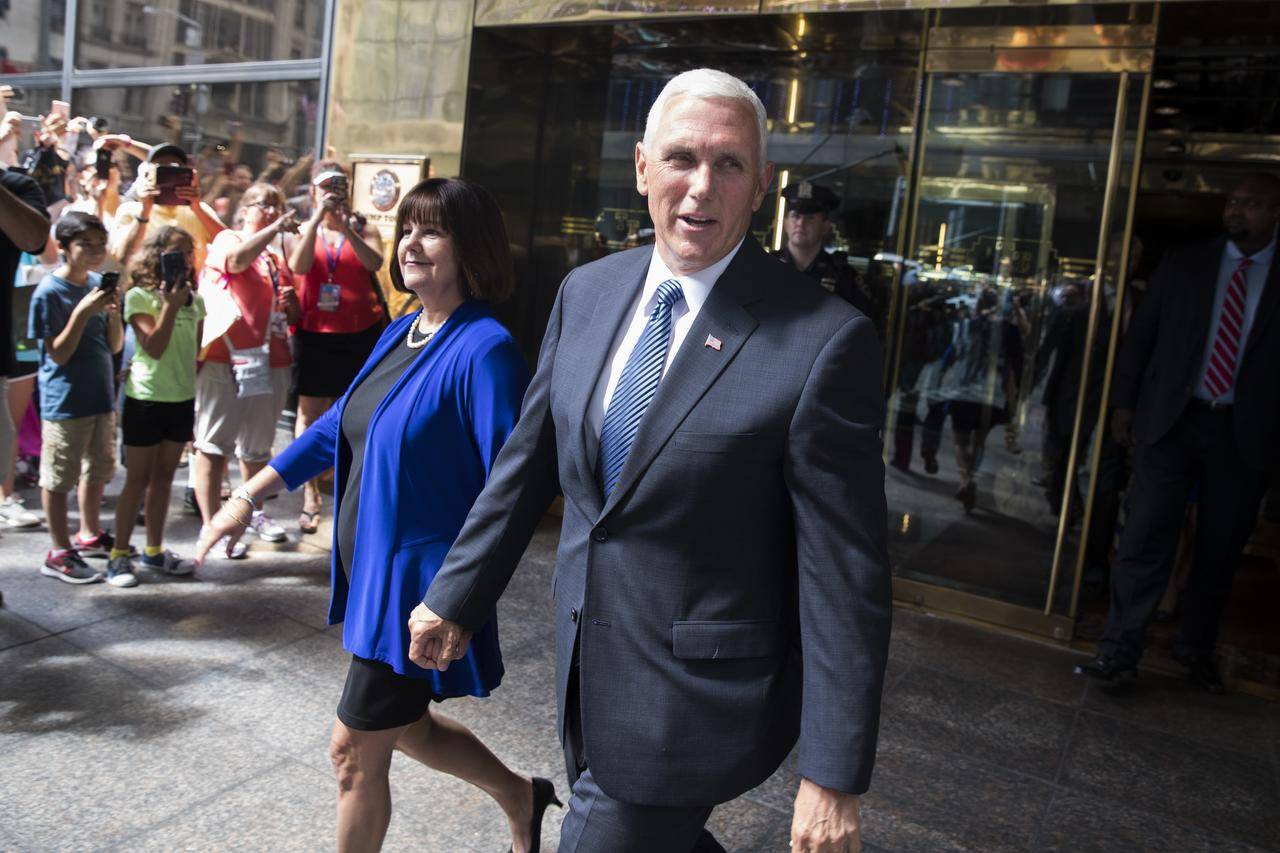 Trump’s pick was aimed in part at easing some Republicans’ concerns about his temperament and lack of political experience. Pence spent 12 years in Congress before being elected governor and his demeanor is as calm as Trump’s is fiery. While some conservatives are skeptical of Trump’s political leanings, Pence has been a stalwart ally on social issues.

Yet Pence is largely unknown to many Americans. And his solidly conventional political background runs counter to Trump’s anti-establishment mantra.

The two men scheduled a news conference for Saturday in New York to present themselves to America as the Republican team that will take on Hillary Clinton and her Democratic running mate in November. The duo will head to Cleveland next week for the Republican National Convention.

As Pence arrived for a private meeting with Trump Friday, he told reporters he “couldn’t be more happy for the opportunity to run with and serve with the next president of the United States.”

In choosing Pence, Trump appears to be looking past their numerous policy differences. The governor has been a longtime advocate of trade deals such as NAFTA and the Trans-Pacific Partnership, both of which Trump aggressively opposes. Pence also has been critical of Trump’s proposed temporary ban on foreign Muslims entering the United States, calling the idea “offensive and unconstitutional.”

The reaction to the Pence choice from Republican officials was overwhelmingly positive — no small feat for Trump, given how polarizing he’s been within his own party.

“It was a pick that clearly shows he is pivoting to the general election,” said GOP chairman Reince Priebus, who was in the midst of an interview with The Associated Press when Trump announced his decision. “He is choosing a person who has the experience inside and outside Washington, Christian conservative, very different style that I think shows a lot of maturity.”

Pence, a staunchly conservative 57-year-old, served six terms in Congress before being elected governor and could help Trump navigate Capitol Hill. He is well-regarded by evangelical Christians, particularly after signing a law that critics said would allow businesses to deny service to gay people for religious reasons.

Clinton’s campaign moved quickly to paint him as the “most extreme pick in a generation.”

“By picking Mike Pence as his running mate, Donald Trump has doubled down on some of his most disturbing beliefs by choosing an incredibly divisive and unpopular running mate,” said John Podesta, Clinton’s campaign chairman.

Clinton spent Friday holding meetings in Washington about her own vice presidential choice. Massachusetts Sen. Elizabeth Warren, a favorite of liberals and one of the Democrats’ most effective Trump critics, and Colorado Gov. John Hickenlooper, were seen in separate cars that left Clinton’s home. Housing Secretary Julian Castro also met with Clinton, according to a person familiar with the meeting who spoke on condition of anonymity to describe the private gathering.

Trump spent weeks weighing vice presidential contenders, including former House Speaker Newt Gingrich and New Jersey Gov. Chris Christie, and only zeroed in on Pence in recent days. In fact, the selection process appeared on the verge of sliding out of control in the final hours before the announcement, sparking speculation that Trump might be changing his mind.

Word that Pence would be joining the Republican ticket began trickling out in news reports Thursday before Trump had made a final decision or called Pence to offer him the job, according to a Republican familiar with the situation. Trump was in California for fundraisers, separated from his closest aides, and was fuming about leaks that he viewed as an attempt to pressure him into the decision.

Still, Trump called Pence Thursday afternoon to offer him the job and ask him to fly to New York for a Friday morning news conference. Pence accepted and boarded a private plane, along with his wife.

A few hours later, a huge truck barreled through a crowded holiday celebration in Nice, France, killing more than 80 people. With Pence sitting in a New York hotel, Trump decided to postpone the announcement.

The billionaire businessman then went on Fox News to say he had not yet settled on his “final, final” choice. He also held a midnight conference call with his top aides to discuss the situation, according to two people with knowledge of the call.

By Friday, plans were back on track.

Trump sent out a Twitter message saying he was pleased to announce Pence as his running mate. Moments later, one of Pence’s aides filed paperwork with the Indiana Secretary of State’s office withdrawing him from the governor’s race.

Pence was up for re-election, and state law prohibits candidates from being on ballots in two contests. Trump’s formal announcement came about an hour before Pence’s noon Friday deadline for withdrawing.

“Never waffled once he made his decision,” Manafort wrote in an email.

Gingrich, one of the finalists for the vice presidential spot, said he was “very comfortable” with Trump’s decision and praised Pence as someone who could help unite the party.

But as of Friday afternoon, Gingrich had yet to share his support with Trump himself. He told The Associated Press he had not received a call from Trump telling him he wasn’t getting the job.

Meanwhile, Trump did speak with Christie, according to a person familiar with their conversation. Ironically, Christie traveled with Trump to Indiana in April to help introduce the candidate to Pence when Trump was trying to win his endorsement ahead of India’s primary.

nextPolice: Pulse nightclub has intruders for 2nd night in a row