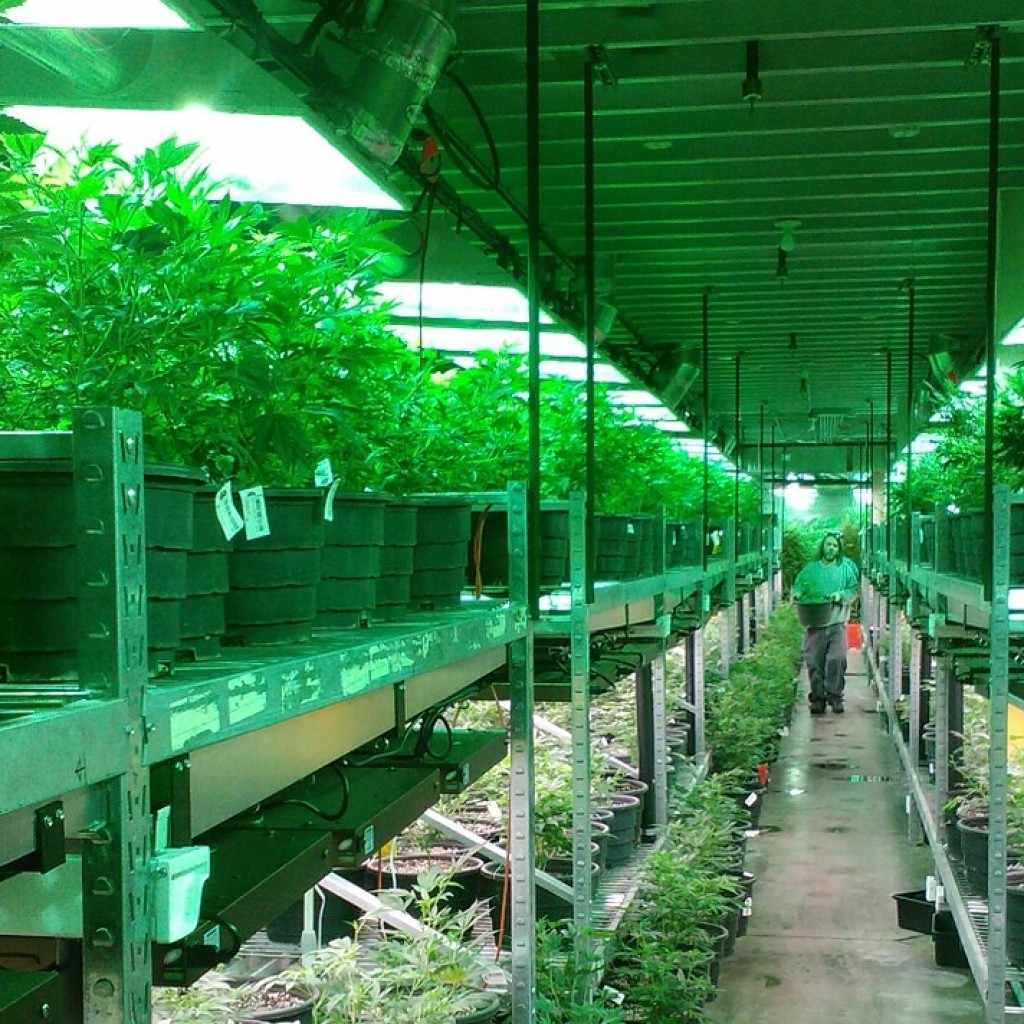 Florida’s first legal harvest of marijuana is stored in multiple vacuum-packed, 441-gram bags in a freezer on the outskirts of Tallahassee.

Each is the result of months of careful growing, monitoring, coaxing, and finally cultivating, scores of plants in a hidden farm overseen by horticulturalists and protected by armed guards.

This is one of two production facilities operated by Surterra Therapeutics, the first of six companies to win state approval to grow and harvest medical marijuana for the seriously ill and dying.

It is part pharmaceutical production facility, part grow house. Its operators say it is just the start of new business they hope will bring high-quality, and formerly unavailable, medicine to patients who need it the most.

“It’s a very exciting place to be in the medical field in Florida right now, because this is not just a new medication we’re talking about,” said Dr. Joseph Dorn, Surterra’s medical director, whose career includes a dozen years in Florida hospice care. “This is a mindset transformation in the treatment of patients, probably tens of thousands of patients whose symptoms are not completely relieved right now.”

Florida laws adopted in 2014 and this year allow two types of medical marijuana: non-euphoric strains, such as “Charlotte’s Web,” that is thought to help control seizures and ease symptoms of certain other medical conditions; and full-strength marijuana to alleviate pain, nausea and other symptoms for patients considered terminally ill.

Such businesses are poised to expand considerably if the required 60 percent of voters in November cast ‘Yes’ ballots for Amendment 2, which would legalize full-strength marijuana for an estimated 450,000 Floridians with debilitating illnesses.

And Surterra, an Atlanta-based start-up that partnered with the 30-year-old Homestead-based Alpha Foliage, plans to be among the state’s largest producers.

The company operates a 6,000-square-foot facility in rural Tallahassee to grow the non-euphoric strain; another slightly smaller facility outside of Tampa grows the full-strength variety. Each is expected to supply medicine for 2,000 to 4,000 patients per month.

Surterra’s primary growing facility outside of Tallahassee is housed in a windowless structure in a sparsely populated, rural area outside of the city. The building is under 24/7 video surveillance and is surrounded by a chain-linked fence with barbed wire.

Nothing of the growing operation can be seen from the main road, and no signs announce its presence.

Visitors are given instructions to the site verbally – no emailed addresses – to make sure its location is not accidentally shared.

Employees and others that the company allows on the property must pass through two checkpoints, each with an armed guard, before reaching the main building.

Once inside, security takes all cellphones and checks IDs a third time.

Each marijuana plant, and anything harvested or discarded, is weighed and tracked by individual bar code.

Waste is ground into near dust and mixed in as compost out back. (Employees are thinking about planting a vegetable garden in the spot.)

“Nobody can slide away with it,” Driscoll said, motioning to the pockets in the protective jumpsuit workers are required to wear: “In fact these are sewn together.”

In truth, it’s a lot of expense and effort for marijuana that would be useless to most would-be recreational smokers.

This high-cannabidiol, low-tetrahydrocannabinol (or THC) type of cannabis does not produce the high typical of recreational marijuana.

If one were to smoke it? “You’d probably just get a headache,” Driscoll said.

Matthew Hunter, a 33-year-old Jacksonville man with Stage IV esophageal cancer, hopes to be among the first to benefit from the newly available strains.

Hunter started his third round of chemotherapy last week and believes marijuana may help alleviate the resulting nausea and pain.

Florida law requires patients have at least a 90-day relationship with a doctor authorized to obtain marijuana before they may have access to the drug. He said he’s looking for one now.

“My understanding is that it has some benefits during the chemotherapy process, which is pretty rough. I can attest to that,” Hunter said.”If it’s something that can be regulated and administered by a doctor, I just don’t see why that wouldn’t be the best route to go.”

For now, only four physicians in Lee, Collier and Charlotte counties have received approval to order marijuana for patients.

Dr. Paul Arnold, a Cape Coral physician specializing in pain management, said he has no patients who would qualify under existing law. But he said he gets calls regularly from people who claim they need it.

While Arnold suspects many are simply looking for easy access to pot, he said many others likely suffer from illnesses that medical marijuana might help treat. He said it is far preferable to highly addictive and potentially lethal opioids patients are commonly prescribed.

“It’s coming down the path of things available to a physician to treat pain, uncontrollable seizures,” he said. “And apparently it’s effective. So, I wanted to be able to do it, of course.”

Each of the plants must go through differing, highly controlled stages of growth to properly bloom the flowers that are the main source of marijuana’s potency.

They are all born from “mother plants,” whose clippings take root over the course of two weeks in small pots.

Young, newly rooted plants are moved to progressively larger pots and left to grow for about a month in a room that is brightly lit for 18 hours a day to encourage growth.

They then move to one of two “flower rooms,” each housing about 200 plants, for the next two months.

Here, the smell of fresh marijuana is overwhelming. They are exposed to a yellow-hued light and more darkness (about 12 hours), meant to mimic the changing seasons. This is what encourages the flowers to develop.

“You’re kind of artificially messing with their grow cycles a bit,” said Wes Conner, cultivation manager at the facility.

Ultimately, the flowers and any other useful parts of the plant are harvested. The first such harvest, which required specific state approval, took place in late June.

Harvested product is taken to another room, where it is dried and ground in a device Connor likens to a “high-tech margarita mixer.” Workers then vacuum-seal it and stick it in a freezer.

Smoking marijuana for any reason remains illegal in Florida. So all of this harvest will eventually be processed into cannabis oils, sprays, balms and capsules that are expected to be ready to ship next month.

Surterra does not plan to offer edibles, such as the cannabis-laced cookies and candy offered in other medical marijuana states.

“They concern me a little bit, because the body reacts very differently,” Driscoll said. “For some people it might take two hours, for some it might take four hours. We’re focused on trying to give people consistent product. It’s very hard to do that with edibles.”

Though marijuana remains illegal under federal law, authorities have generally allowed the states to experiment with legalization since 1996, when California voters first authorized its use for certain medical conditions.

Twenty-five states, the District of Columbia and Guam allow comprehensive marijuana use for medical purposes, and several others are considering it this year, according to the National Conference of State Legislatures.

Another 17, including Florida, allow for more limited medical marijuana use. Amendment 2 in Florida, which is on the November ballot, would only expand its allowable medical use for patients with strictly defined debilitating illnesses.

With such a fuzzy regulatory patchwork, running a marijuana production and distribution operation in Florida comes with some unique logistical challenges, Surterra officials say.

Simple things for most businesses, such as insuring vehicles used to transport the product, cost 10 times what they normally would, for instance, Driscoll said.

Employee background checks require extra scrutiny. And Surterra is still meeting with several banks to make sure they won’t have difficulty in depositing earnings, a problem some marijuana businesses have had in states like Colorado.

The legally gray nature of the business becomes even more apparent when a reporter asks Driscoll how the company got the seeds to even start the business. Buying them from out of state and bringing them to Florida would be a federal crime, after all.

Her only explanation, even when pressed: “Cannabis is native to the state of Florida.”

(Note: While cannabis certainly grows wild (and in legal and illegal farming operations) in North America, the plant likely originated in central Asia.)

Opponents of Amendment 2 have been largely mum about the 2014 and 2016 laws. Christina Johnson, spokeswoman for the “Vote No on 2” campaign, said that’s because they were not constitutional amendments.

“Charlotte’s Web and Right to Try legislation on the other hand can be changed, limited or altered by Florida statute every year unlike Amendment 2,” Johnson said.

While Surterra supports expanding access to medical marijuana, Driscoll said she is less certain about the merits of legalizing the drug for recreational use.

She said marijuana producers in states like Colorado have focused their energies on the lucrative recreational market, at the expense of developing strains better suited for patients.

“This is a state that we thought was taking the medical part of it very seriously,” she said. “Whereas a lot of the states are ‘wink-wink’ medical or recreational. And that was something that we were not interested in. We wanted to go where we could really focus on the medical parts about it.”