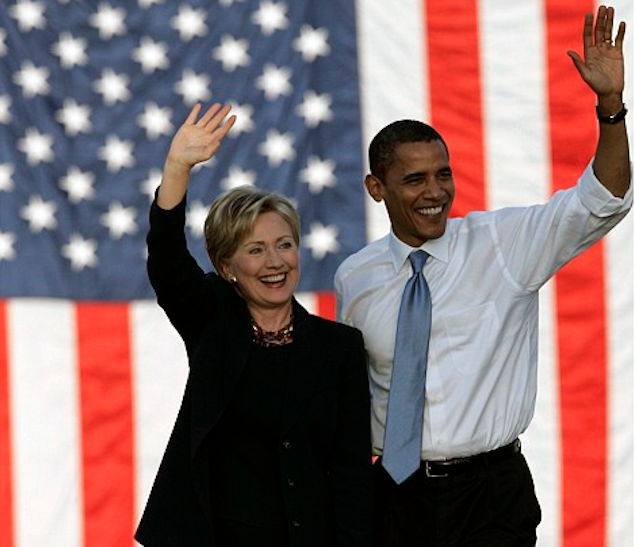 The first black president made the case for electing the first female president at the Democratic National Convention in Philadelphia late Wednesday night.

Barack Obama made a speech some might say was as much a paean to the U.S. of America as it was for keeping the presidency in the Democratic Party’s hands for another four years by electing Hillary Clinton, who served as secretary of state in his first term.

Whether or not Obama’s speech will go down as the defining statement to help elect Clinton — as Bill Clinton’s speech in 2012 was considered for Obama — will be decided by the pundits later on. But it was certainly an effective appeal in what was probably the president’s last major speech.

“Tonight, I ask you to do for Hillary Clinton what you did for me,” Obama said as he closed. “I ask you to carry her the same way you carried me. Because you’re who I was talking about 12 years ago, when I talked about hope — it’s been you who’ve fueled my dogged faith in our future, even when the odds are great; even when the road is long. Hope in the face of difficulty; hope in the face of uncertainty; the audacity of hope!

“America, you have vindicated that hope these past eight years. And now I’m ready to pass the baton and do my part as a private citizen. This year, in this election, I’m asking you to join me — to reject cynicism, reject fear, to summon what’s best in us; to elect Hillary Clinton as the next president of the United States, and show the world we still believe in the promise of this great nation.”

As was reported on Twitter just as Obama began the speech, Hillary Clinton joined the president for a curtain call after the speech.

Obama hit Donald Trump hard — very hard, in the address, comparing him indirectly to a fascist.

“Ronald Reagan called America ‘a shining city on a hill.’ Donald Trump calls it ‘a divided crime scene’ that only he can fix,” the president said. “It doesn’t matter to him that illegal immigration and the crime rate are as low as they’ve been in decades, because he’s not offering any real solutions to those issues. He’s just offering slogans, and he’s offering fear. He’s betting that if he scares enough people, he might score just enough votes to win this election.”

The president acknowledged that “Hillary’s got her share of critics.”

Obama’s speech followed the biggest night of the convention in attempting to expose Trump as a fraud and disaster for the American public.

The Trump campaign weighed in and accused the Democrats of being the pessimists, and Team Trump as the man who has a positive vision for America.

“Instead of dealing with reality, they spoke in cheap, petty terms beneath the dignity of a convention,” said spokesman Stephen Miller. ”Their entire message could be summed up as: ‘Things are perfect, let’s not change a single thing.’ So they resorted to the politics of fear, trying to convince Americans not to vote for change — they spoke on behalf of the big banks and the big elites, not on behalf of suffering Americans. They want to keep the system rigged for their donors. Period. Rigged trade deals, a rigged economy, and open borders that benefit the few at the expense of the many. Our campaign offers a bold, exciting, detailed vision for the future.”

Day Four of the convention starts up Thursday.