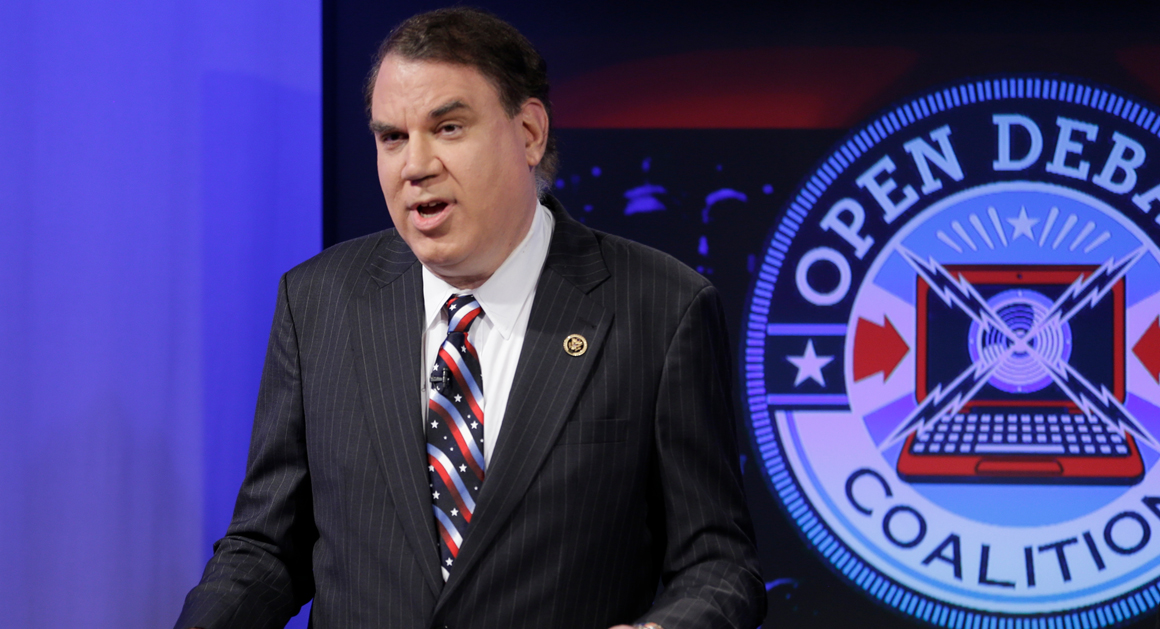 Democratic leaders want Rep. Alan Grayson to go away. His ex-wife says he’s abusive. Ethics questions dog him. Yet the liberal lawmaker is refusing to drop his bid for the U.S. Senate, potentially upending party hopes that moderate Rep. Patrick Murphy will emerge as the nominee against Republican Sen. Marco Rubio.

Grayson is counting on the party’s most faithful to ignore the negative headlines and look at his record of being a champion of liberal values, as opposed to Murphy, a former Republican who has voted against President Obama on a number of key issues.

“He’s a nobody. Any kind of direct comparison between me and him, he loses,” Grayson said during a telephone interview this week. “There’s no way you can look at Patrick and think that he is anything but a sock puppet for lobbyists and special interests.”

Voting has already started in the Aug. 30 primary, which is being watched nationally as Democrats hope to regain control of the Senate.

As of Thursday morning, about 850,000 vote-by-mail ballots had been distributed to Democrats and about 63,000 votes had been cast. Nearly 21,000 have come from the Tampa Bay area, where Democrats are more moderate, which could help Murphy.

Murphy has his own challenges: He’s still largely unknown to most of Florida’s 4.7 million Democrats, and Republicans have spent $2.5 million on attack ads to define him before his own message gets out, accusing him of embellishing his resume by overstating his work as a certified public accountant and small business owner.

Murphy has a huge fundraising advantage over Grayson, and backing from President Barack Obama, Vice President Joe Biden and Senate Minority Leader Harry Reid. But if turnout in the summertime primary is low and dominated by the party’s most liberal voters, Grayson could win.

As for Rubio’s primary test, polls put him far ahead of developer Carlos Beruff, who spent millions of his own money campaigning for what initially appeared to be an open seat. Rubio had said for months that he would not seek a second term, but after his presidential campaign failed, he changed his mind at the last minute.

Grayson is more consistent in voting with his party, but some Democrats worry he’s become unelectable.

“Grayson has stepped on his foot here a few times and I don’t think he has any way to get elected. Murphy has a better chance of winning,” said Joe Wells, 84, or Cape Coral. “He’s a little steadier and a little less bombastic and still favorable to my issues.”

Last week, the mother of Grayson’s five children shared four police reports with Politico. In them, Lolita Carson-Grayson told police that Grayson abused her, but none of the claims led to any charges over the years. Grayson countered that he never hit her, and accused her of abusing him and their children.

The couple’s 25-year marriage was annulled last year after it was discovered that she was already married when they wed.

“Voters actually can discern truth from fiction,” Grayson said. “They’ll see through it.”

Grayson has ignored Reid’s latest call for him to quit. Reid made the same request after the House Ethics Committee in April found “substantial reason to believe” Grayson violated federal law and House rules in a number of business and legal activities and in managing his congressional office. Part of that investigation involves an offshore hedge fund managed by Grayson.

The calls for Grayson to drop out have made an impression on Robert Valdez, 20, of Palm Beach Gardens.

“I don’t think he can bring the leadership that Patrick can bring,” Valdez said. “He’ll be a wonderful senator.”

But the terrible headlines haven’t scared off all of Grayson’s supporters.

“We need a long time progressive, someone who’s stood up for many, many years and not someone who jumped on a bandwagon to win an election,” said Tiffany Barnes, 34, of Wakulla County, just south of Tallahassee.

Barnes said she has worked with domestic abuse organizations, knows how women respond to abuse, and doubts Carson-Grayson’s claims.

“It looks more like a political stunt than a woman crying out for help,” she said.

LaVon Bracy, 67, of Orlando, said she used to live around the corner from Grayson and visited the house many times. She knows Carson-Grayson and their children, and said she doesn’t believe the abuse allegations.

“I know him personally, I’ve seen what he’s done for this area, he’s been a great advocate and he’s been a longtime Democrat,” Bracy said. “Murphy, he’s been a Republican most of his life.”

Grayson has aired television and radio ads since November, but in limited buys. Murphy began airing an ad two weeks ago featuring Obama, but hasn’t saturated the state. Both have sought free media coverage.

Murphy is campaigning as if he’s already won the nomination. He canceled the primary’s only scheduled debate, citing the abuse allegations, and has focused his attacks on Rubio.

“Marco Rubio, to me, encompasses everything that’s wrong with Washington, D.C.,” Murphy said. “Florida wants someone who’s going to show up, who’s going to work, who wants the job.”