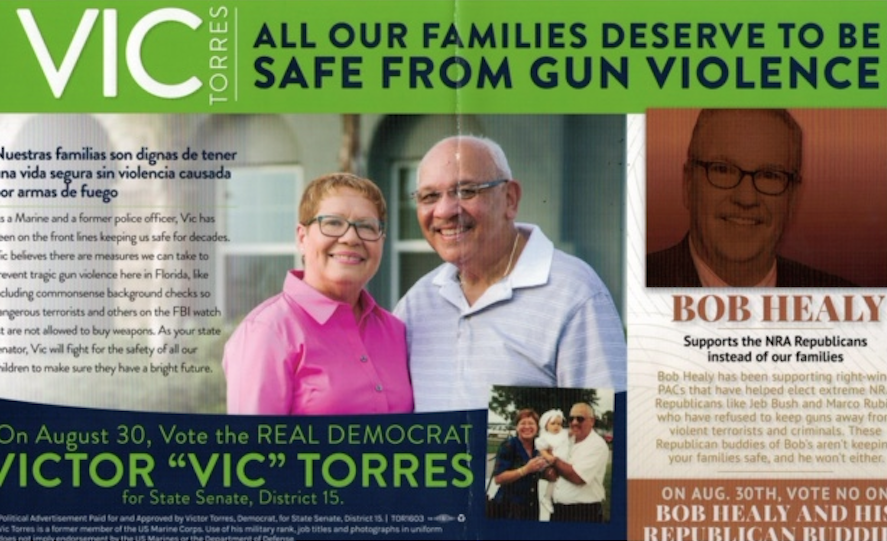 The mailer marks the second time in a week Healy has accused the Torres campaign of slinging unjustified mud. And this time Healy said he’s taking it personally, because the mailer suggests he would side with the NRA in the wake of the Pulse nightclub massacre.

Healy said he is appalled the campaign would use gun violence as a smear tactic against him, especially since he and his funeral home were what he called “last responders,” providing funeral services for Pulse victims at no charge to the families.

Much of the new Torres campaign mailer highlights Torres’ background as a Marine and former police officer, and his commitment to stop gun violence, including “commonsense” approaches to make sure dangerous terrorists and others cannot buy guns.

But like a mailer that went out last week in SD 15, the new one includes a sidebar characterizing Democrat Healy as tied to “right wing PACs” that supported Republicans. Those PACs are affiliated with professional associations for funeral directors, of which Healy has been a member. Torres’ campaign is trying to characterize Healy as a conservative Republican in Democrat’s clothing.

“And he is taking money from Republican PACs as well,” Torres’ campaign manager Zachary Hall added in a press statement. “Prominent Osceola Republicans Fred Hawkins, Ken Smith, and Jim Swan have all either donated to his campaign, hosted a fundraiser for him, or both. Not only has Healy refused to support any fellow Democrats this cycle, but not a single Democratic official is supporting him. This is a Democratic primary and voters have the right to know who is the true Democrat.”

“Vic Torres is a true Democrat with a record of service,” Hall added.

Torres and Healy are facing off in the Aug. 30 Democratic primary for SD 15. The winner would face Republican nominee Peter Vivaldi.

Healy, 62, expressed exasperation, saying he’s been a lifelong Democrat. He noted his only donations to Republicans were more than a decade ago, $100 checks given to friends running for office, and the dues he paid to professional funeral directors’ organizations were for services and membership that had nothing to do with support for the political activities of the PACs the organizations run.

“They’re trying to say money I gave 14 years ago is something that represents me today,” Healy said. “I think that’s pretty far out there.”

Healy said he does support the 2nd Amendment, has a permit to carry a concealed weapon and is a gun owner. He also said he supports tightening rules and enforcements on background checks for weapons, including closing the so-called “gun show loophole,” and for getting federal agencies to share more information to keep guns out of the hands of people under the watch of federal law enforcement.

He said the NRA has given him an “F” rating.

“I am personally appalled they would use gun violence in a smear campaign in Orlando. That’s just wrong,” Healy said. “It shows in my mind the desperation of a career politician (Torres is a retired police officer and bus driver who’s been in the Florida House for four years) who is losing ground in the polls. We are still recovering from the worst gun attack in the country. I’ve sat with a number of victims’ families from the massacre. I’ve provided funeral services for those people. To try to suggest that I am not completely disgusted by what’s happening is just out of bounds.”

previousJoe Henderson: After months of bad news, a return to ‘everyday living’