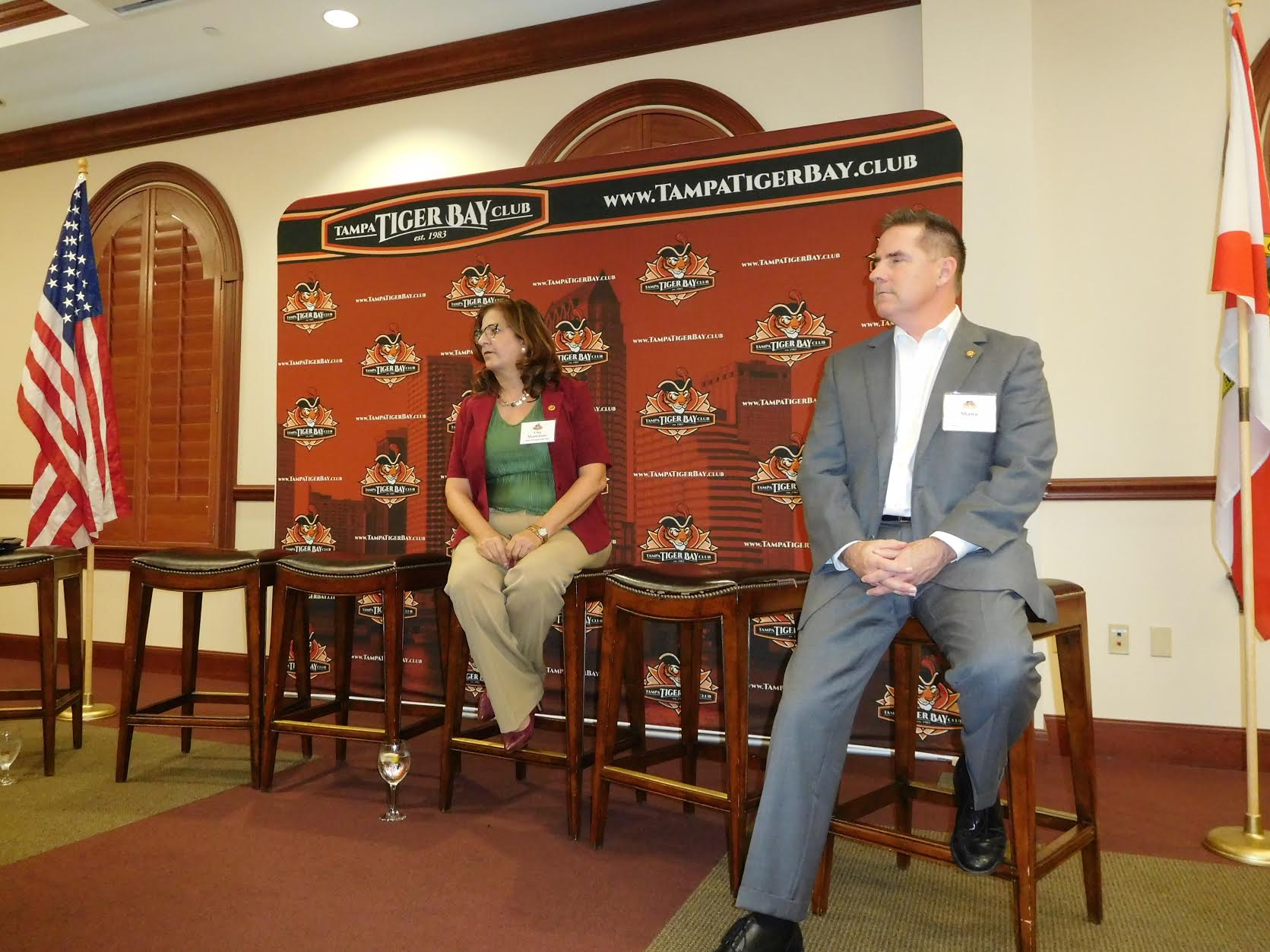 The House District 63 race between Republican incumbent Shawn Harrison and Democratic challenger Lisa Montelione is expected to be one of the most competitive in Florida this fall.

The North Hillsborough County swing district — which includes much of New Tampa, Forest Hills, North Tampa and the USF community — has flipped back and forth over the past three election cycles, with Harrison taking it in 2010 and 2014, and Democrat Mark Danish winning it in 2012.

At Friday’s Tiger Bay meeting, the two squared off for the first time this year, with one clear difference being their take on public education and charter schools.

“I‘m a believer in competition,” Harrison said, when asked by former Education Commissioner Betty Castor his stance on the issue. “I think charter schools are a good thing.”

He added that his daughter attends Terrace Community Middle School in Thonotosassa, which he proudly said was ranked as the No. 1 charter middle school in Hillsborough County. Harrison said there was a problem with a lack of bus service for students, but that parental involvement had cured that issue. “I understand that’s probably not something that is available across the general spectrum,” he acknowledged.

Montelione, who is serving in her sixth year on the Tampa City Council representing the same district Harrison served in for eight previous years, countered, saying a child’s zip code or socioeconomic status should not determine his or her education. “I don’t think that any dollars should be diverted away from our public schools when we have one of the lowest funded public school systems in the country,” she said.

“I’m not privileged. I don’t have a lot of money,” she said, adding her son was only able to attend Louisville University due to his hard work in acquiring a full scholarship, because she said she could never have afforded to pay for his tuition.

Montelione then took the opportunity to indicate Harrison was part of a GOP-led Legislature that voted to cut more than a billion dollars from education in 2011. But the Tampa Republican defended that vote, saying the state was facing a $4 billion budget shortfall in that session, and a lot of programs had to be cut to balance the budget. And, he cheerfully noted, the Legislature approved a $20.15 billion K-12 budget this past session, the highest in state history.

Montelione later responded the Legislature could find other parts of the budget to cut, including “corporate welfare.”

When asked when they have shown political courage, Montelione mentioned her opposition to the controversial Tampa Bay Express project, which would create toll lanes on Interstate 275 and Interstate 4. “In my district, there are a lot of people who use their cars to get back and forth to work, and some of them would probably like to get in a managed toll lane to … sweep past the traffic so they can go from Corey Lake Isles to Westshore,” she said, though there has been plenty of public support for Monteleone’s “no” vote on TBX  at the Metropolitan Planning Organization.

In the 2015 legislative session, Harrison voted to support a Senate hybrid bill that would allow for Medicaid expansion, one of only four House Republicans to do so. He repeatedly referred to that vote as showing his independence and his responsiveness to the moderate view of the district. “I cross the aisle whenever I get the opportunity,” he said at one point.

“That’s very admirable,” she said, “except the votes have all been along party lines” with the exception of that Medicaid expansion vote. Harrison did not respond to that quip.

The two also disagree on Amendment One on the November ballot, the solar power initiative backed by the public utilities. Montelione opposes it; Harrison supports it.

On another environmental issue, Harrison talked about his support for a controversial fracking bill that he said had been misinterpreted. The bill would have put a moratorium on fracking until 2017 while requiring the Department of Environmental Protection to conduct a $1 million study examining the potential impact of fracking on the state’s geology and water supply, specifically looking for effects on human health. The bill also prohibited local bans on fracking, called for increasing penalties for violating fracking regulations, and required companies to go through an extensive permitting process before fracking. It was supported buy the Florida League of Cities, but bitterly opposed by environmental groups.

There was a third person on the stage fielding the same questions on Friday — House District 60 Democrat David Singer. His GOP opponent, Jackie Toledo, said earlier in the week that she had a conflict. The two candidates in the House District 59 race — Republican incumbent Ross Spano and Democrat Rena Frazier — also did not appear. Spano had earlier told Tiger Bay he had a conflict, while Montelione said Frazier, an attorney, told her that on Thursday she had a court hearing that she could not get out of.

Singer again expressed his disappointment that Toledo wasn’t appearing at what might be the only one-on-one matchup between the two HD 60 candidates before the election. He also noted how Rebecca Smith, the woman who lost a close GOP primary to Toledo in HD 60 last month, did attend the event. She declined to comment afterwards on who she would be supporting in the Singer-Toledo contest.

previousDonna Deegan is ready to talk politics. And Jacksonville will listen.