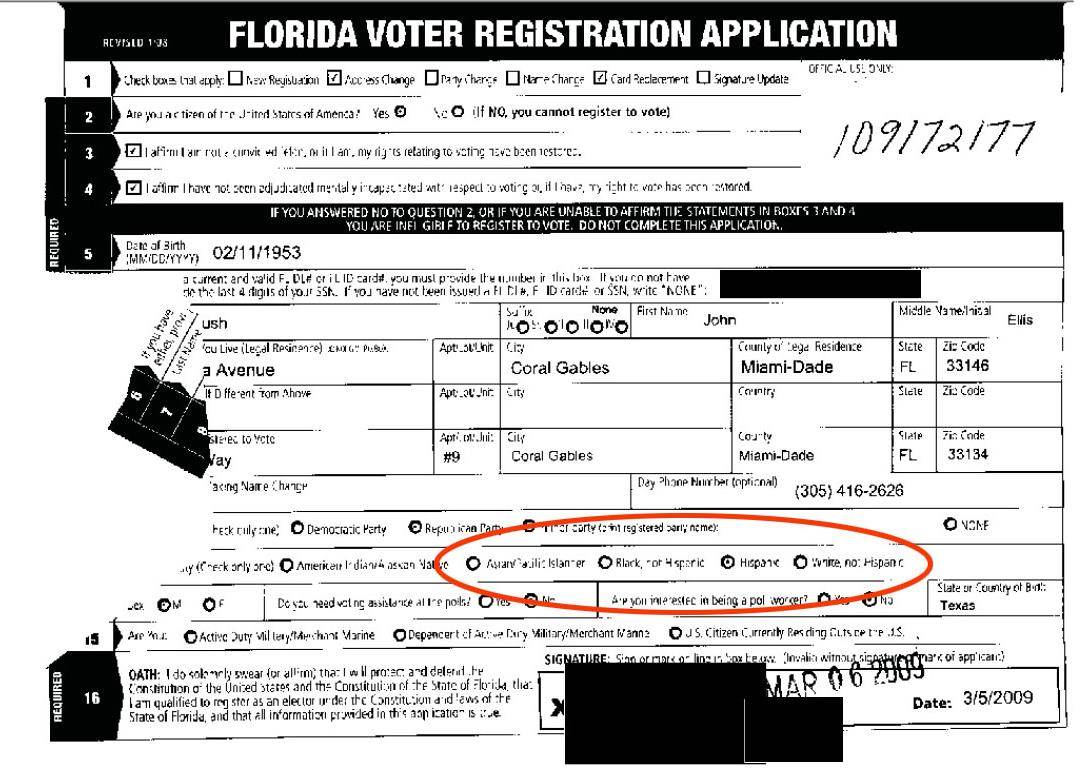 (UPDATE) As Gov. Rick Scott continues to offer updates on Hurricane Matthew while it slowly moves up Florida’s Atlantic Coast, members of Florida’s Democratic delegation are calling on him to extend the voter registration deadline from next Tuesday to Friday, Oct. 14.

“We strongly urge you to extend the deadline for our citizens to register to vote in November’s election, at least from October 11th to October 14th,” reads the letter. “It goes without saying that our democracy is stronger when more people vote. With a natural disaster on our doorstep, registering to vote understandably will not be possible in the immediate aftermath of such a significant storm. Of course, clean up and dealing with storm-related damage will be many Floridians’ primary focus.”

Scott rejected such a request made on Thursday by the Hillary Clinton campaign.

“I’m not going to extend it,” the governor told reporters Thursday. “Everybody has had a lot of time to register. On top of that, we have lots of opportunities to vote: early voting, absentee voting, Election Day. So I don’t intend to make any changes.”

Another Republican governor whose state is preparing to be hit by Hurricane Matthew, South Carolina’s Nikki Haley, has extended her state’s registration deadline, which was scheduled for Saturday. That prompted the ACLU of Florida to join the Democratic delegation in calling on Scott to extend Florida’s registration deadline.

Later on Friday the ACLU of Florida made their own request to extend the voter registration deadline.

“This is a simple, non-partisan request for the governor to use his authority to ensure that every eligible voter has the opportunity to participate in this important election,” said ACLU of Florida Executive Director Howard Simon. “Preparing our state for a natural disaster and enabling full and fair participation in our democratic process aren’t mutually exclusive – in fact, they should go hand in hand.”

There has been some speculation the Democrats may sue Scott to extend the registration deadline if he doesn’t adhere to their request. But as election expert Rick Hasen wrote on Thursday in Slate, Scott could be sued for actually extending the deadline on the basis that such an extension is illegal, since only the Florida Legislature is allowed to set the rules on presidential elections.

The request to extend the deadline is hardly trivial, as parts of the state contend with the hurricane. As as has been widely reported in the past 24 hours, University of Florida political science professor Dan Smith has estimated “roughly” 50,000 people were registered in Florida over the last five days before the deadline in 2012.

Read the letter below:

Thank you for your leadership and all of the hard work that you and state employees are doing to ensure the safety and security of Floridians as we prepare for Hurricane Matthew and related tropical storm and hurricane watches and warnings.

We appreciate your steady communication with federal, state, and local leaders, as well as public health, transportation, and law enforcement experts, to ensure our state is fully prepared for evacuations, shelter openings, prevention of power outages, monitoring of fuel supply, search and rescue, and provisioning of resources and supplies.

As you have rightly cautioned our citizens, Hurricane Matthew is a life-threatening storm that Floridians must take seriously, or risk being killed by it. President Obama has officially declared Hurricane Matthew’s expected impact in Florida to be a federal emergency, and we will work with you to ensure Florida has the federal recovery resources and support we need.

Some of the potential impacts of the storm include structural damage to even the sturdiest buildings, which will be worsened by large airborne projectiles, and make some locations uninhabitable for months. In addition, we can expect trees to snap or uproot, rendering many roads impassable and causing widespread power and communications outages.

The federal government has further cautioned that surging and deadly winds are not the only areas of concern — major rainfall flooding can also be life-threatening, with rivers and tributaries rapidly overflowing their banks, causing flood control systems and barriers to become stressed, and escape routes to become submerged.

The bottom line is that Floridians do not and should not have anything on their minds right now other than keeping themselves and their families safe from what could be a historic Category 4 blow to a large part of our state. As a result, it will be logistically challenging and likely impossible for many who would like to register to vote to be able to do so before the impending deadline on October 11th.

We strongly urge you to extend the deadline for our citizens to register to vote in November’s election, at least from October 11th to October 14th. It goes without saying that our democracy is stronger when more people vote.  With a natural disaster on our doorstep, registering to vote understandably will not be possible in the immediate aftermath of such a significant storm. Of course, clean up and dealing with storm-related damage will be many Floridians’ primary focus.

Therefore, we respectfully request an extension of the voter registration deadline so that we may ensure the franchise, the integrity of our democracy, and the rights we as Americans hold dear, are fully protected.

As elected officials, we must do all that we can to keep our citizens safe as well as safeguard the freedom of every individual to elect their representatives, from the state house to the White House.

previous'This is not over': Hurricane sideswipes Florida coast