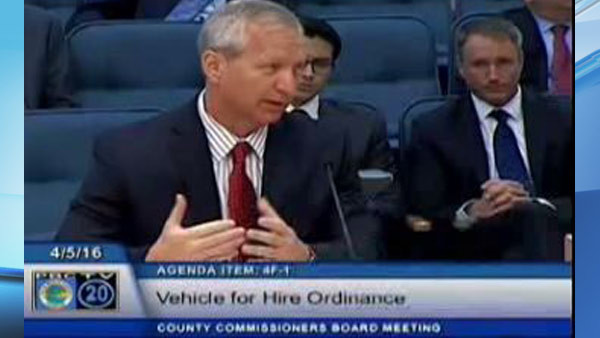 A change in government in Washington has been preceded by a changing of the guard at one of the Tampa Bay area’s most troubled government agencies, the Hillsborough County Public Transportation Commission.

On the same day the PTC finally approved rules legalizing ridesharing companies Uber and Lyft to operate in the county, the agency lost its chairman and soon, its executive director.

Kyle Cockream announced Wednesday he will depart from the agency at the end of December. His tenure has become increasingly controversial over the past few months, after revelations about some of his actions as PTC chairman caused discomfort with some members.

“Our conversation at the PTC needs to be about creating rules in Hillsborough County that work for everyone, and I regret that the recent news coverage of the PTC has taken focus away from that effort,” Cockream said Wednesday. “It’s also disappointing that this has overshadowed our work on behalf of consumers, helping with everything from getting refunds for people who’ve been unlawfully towed to assisting handicapped people with transportation issues. As I finish out my contract term, I am focused on moving forward in a positive manner, providing help for people who use for-hire transportation in the county.”

Cockream has been with the agency since 2014, after having served his entire career previously with the Hillsborough County Sheriff’s Department.

This is not the first time this year he has announced he was leaving the agency. In April, Cockream said he would be stepping down in July, shortly after Florida Politics reported Cockream had met with Palm Beach County commissioners regarding issues related to the ridesharing companies. Cockream said he was on personal vacation time in Palm Beach County when he was contacted and asked to appear at a County Commission meeting by Brock Rosayn, who runs Metro Taxi in Palm Beach County, and Rick Versace, president of the Florida Limousine Company. Both men had been pressing for more regulations on Uber and Lyft.

He has stayed on the job since then, but a series of recently released email exchanges with officials from the taxicab and limousine industry in Tampa prompted new criticism, none more damaging than the report he had used employees from local taxicab and limousine companies to assist in PTC-led sting operations to issue citations to Lyft and Uber drivers.

Also departing on Wednesday was PTC board chairman Victor Crist, who was exultant about getting a proposal passed that finally legalized Uber and Lyft. Crist had previously announced he would be stepping down after leading the agency over the past four years.

The agency may not have a very long shelf life, as there is proposed legislation in Tallahassee that would kill the PTC. Created as a Special Act in the 1970s (the only one of its kind in the country), the Legislature has the power to eliminate it.

Also departing the board was Tampa City Councilman Frank Reddick, who has had a tempestuous relationship on the dais with Crist over the past few months. Reddick had an issue with the PTC attorney Cynthia Oster, who said outside counsel had suggested it was OK that the temporary agreement proposed for Uber and Lyft did not include Level II background checks. Saying that was mandated by the Special Act that they must have regulated drivers pass such a security clearance, Reddick said he didn’t feel good about violating a law.

“We as elected officials should not be setting an example of violating laws that are in place,” he said. Reddick also took issue with the fact that PTC Vice Chairman David Pogorilich was never given consideration to succeed Crist as chairman. Reddick, who teamed with Pogorilich in opposition to the temporary operating agreement, said that was a total act of “disrespect,” and something he didn’t want to be around.

previousPostcard from the center, which didn’t hold

nextHappy day at Hard Rock: Seminoles get to keep blackjack