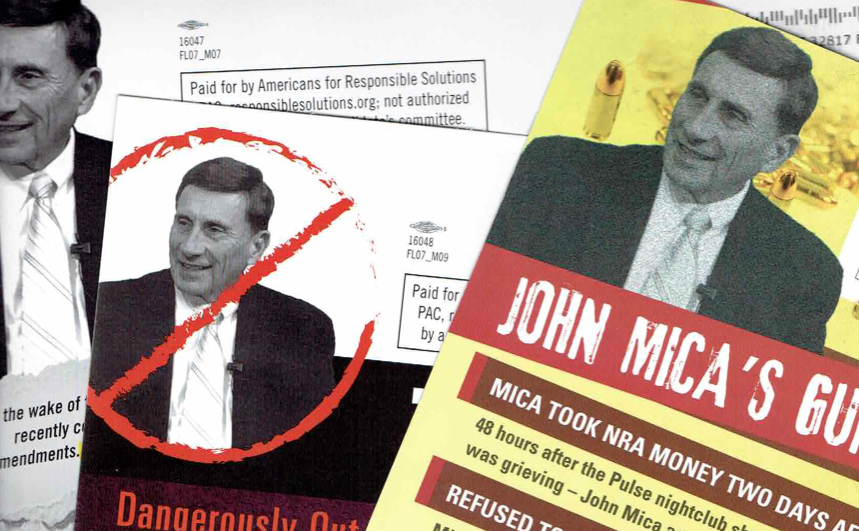 Updated campaign finance documents filed with the Federal Election Commission this week show outside groups such as the Democratic Congressional Campaign Committee and the Democrats’ House Majority PAC combined to spend nearly $6.3 million on advertising either supporting Murphy or attacking Mica. And that does not include spending by the Florida Democratic Party, which paid for several mailers down the stretch that still havn’t shown up in posted campaign finance documents.

Mica got some help from Washington too, but not nearly as much and not nearly as soon. The National Republican Congressional Committee and the National Rifle Association Institute for Legislative Affairs combined to spend just over $1.6 million to support Mica or bash Murphy.

Murphy won 51-49, and Mica blamed the “massive amount of money” spent against him as one of the reasons his failed re-election campaign was “difficult and challenging.”

The outside money went a long way toward defining the campaign. Neither Mica, a 12-term incumbent, nor Murphy, a newcomer, had anywhere close to that kind of money in their official campaign funds, though the most recent filings for total contributions run only through Oct. 19, so do not include anything the candidates were able to raise or spend in the last three weeks. Mica had raised $1.2 million by that time, and Murphy about $600,000.

Murphy’s outside help came early and stayed relentless for nearly two months heading into the election, paying for independent television commercials, internet advertising, and mailers. The first to arrive was the House Majority PAC, which spent $430,000 on Sept. 22 on internet and TV advertising introducing Murphy. Before it was done, that Democratic organization spent about $1.1 million.

But her big benefactor was the DCCC, which spent more than $5.1 million on advertising, either supporting Murphy or bashing Mica. A third group, Americans for Responsible Solutions PAC, a gun law reform group created by former Democratic U.S. Rep. Gabby Giffords and her husband, retired NASA astronaut Mark Kelly, spent $60,000 attacking Mica on his gun positions and votes.

Mica didn’t get outside help until Oct. 24, when the NRCC came in with the first of its $1.6 million in ads attacking Murphy as “the mystery candidate” allegedly under the control of U.S. House Democratic Leader Nancy Pelosi. He also got $58,000 worth of campaign mailers sent out by the NRA’s committee, supporting his positions on guns.

The $7.9 million in total outside spending documented on the FEC website was unprecedented in Central Florida, but wasn’t even the most spent this year in a Florida-based congressional race. A total of $8.1 million was spent in Florida’s Congressional District 18 along the Treasure Coast, where Republican Brian Mast flipped the vacant seat by defeating Democrat Randy Perkins. And $15.8 million was spent in Florida’s Congressional District 26 in South Florida, where Republican U.S. Rep. Carlos Curbelo defeated Democrat Joe Garcia.

Two other Florida congressional races saw at least $1 million in outside spending. Charlie Crist benefited from the lion’s share of the $4.3 million spent, to oust Republican U.S. Rep. David Jolly from Florida’s 13th Congressional District in Tampa Bay. There was $1.8 million spent in Florida’s 2nd Congressional District in the Panhandle, though almost all of that was spent in the Republican primary. Once Neal Dunn won that contest in August, he was set to easily defeat Democrat Walter Dartland this week.