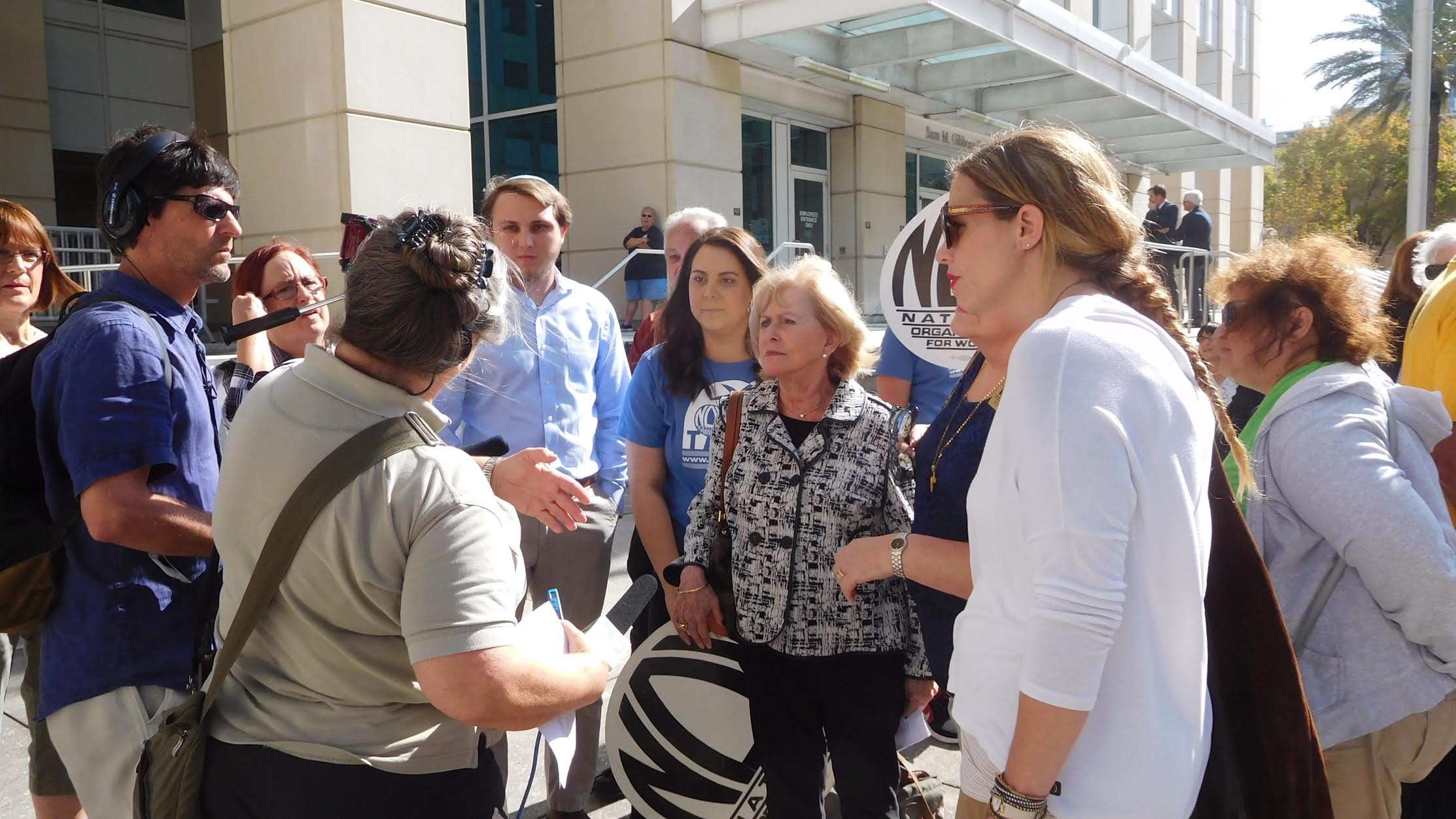 Of the many Cabinet choices made by President-elect Donald Trump, some of the strongest opposition centers around the nomination of Alabama Sen. Jeff Sessions as Attorney General.

Wednesday morning in Tampa, a group of activists spoke with officials in Sen. Bill Nelson‘s district office, calling on him at the very least to call for a delay a vote on Sessions’ confirmation, scheduled for January 10. Outside, a couple of dozen more concerned citizens held signs and spoke to reporters about their opposition to the Alabama Republican.

“We think that over the course of his career, Sen. Sessions used the power of the courts to discriminate against civil rights leaders, allegedly using racially charged language to disparage minorities, expressed support for the KKK and then tried to dismiss it as a joke,” said Toni Van Pelt, the president of the Pinellas County-based Institute for Science and Human Values.

“He celebrated the gutting of the Voting Rights Act, opposed same-sex marriage, denied the constitutionality of Roe v. Wade, voted against greater access for health care for veterans, blocked the paycheck fairness act, and voted against the reauthorization of the Violence Against Women Act,” Van Pelt added

“He should not be the Attorney General of the United States.”

Other groups represented at the rally included the Tampa Bay Coalition of Reason, the Clearwater Unitarian Universalist Church, AAUW, Suncoast Humanist Society, Atheists of Florida and Center for Inquiry-Tampa Bay, and numerous Bay area chapters of the National Organization for Women.

The reason for the call to delay next Tuesday’s confirmation hearing is that the groups allege that Sessions has failed to provide media interviews, speeches, op-eds and more from his time as U.S. attorney in Alabama, the state’s attorney general and his first term as senator, from 1997 through 2002. As reported by CNN, the progressive groups contend that Sessions listed just 20 media interviews, 16 speeches outside the Senate, two op-eds, an academic article and a training manual, as well as just 11 clips of interviews with print publications — including none before 2003.

Sandra Weeks, with the West Pinellas County chapter of NOW, rapped Sessions for failing to disclose his long history with Breitbart News, the conservative website that was formerly run by Steve Bannon, now serving as chief White House strategist in the incoming Trump administration.

Weeks cited the fact that Bannon once called Sessions “one of the intellectual, moral leaders of this populist, nationalist movement in this country,” which was just reported Tuesday by the Huffington Post.

A spokesman for Senator Charles Grassley, the Iowa Republican who chairs the Senate Judiciary Committee, told CNN on Sunday that Sessions has been forthcoming with information on his questionnaire.

“The notion that Sen. Sessions — somebody who committee members have known and served beside for 20 years — hasn’t made a good-faith effort to supply the committee with responsive material is preposterous,” said a spokeswoman for Grassley. “It’s been clear from the day Senator Sessions’ nomination was announced that the left-wing advocacy groups aren’t interested in a fair process and just want a fight. We trust the minority committee members will have the courage to give Senator Sessions the fair and respectful process he deserves.”

Nadine Smith, the head of Equality Florida, met with staffers in Senator Nelson’s office. She calls the Florida Senator “an absolute statesman,” but said that “these are the times that call for people with some fight in the belly.”

“We can’t start normalizing this sexist bigotry, this racism, and this is the place where you draw the line, and you fight back and you hope the senator will hear that message and understand that there’s an awful lot of us who have his back if he’s willing to fight as hard he’s needed to,” Smith said.

When asked if she’ll continue to support him if he were to vote to confirm Sessions later this month, Smith replied: “I think that anyone who normalizes this administration’s horrific cabinet selections (and) does not demand a level of vetting, will lose the confidence of voters in Florida.”

Last November, just 10 days after Trump was elected, FloridaPolitics asked Nelson his thoughts on the nomination of Sessions to be AG.

“I will certainly reserve judgment if he is the nominee until we go through the hearings and it comes to the full Senate for a vote,” Nelson said at a news conference at his downtown Tampa district office.

“I can tell you that Jeff Sessions and I have worked on a number of pieces of legislation together in a bipartisan way and I’ve always had a very good working relationship with him.”

Last year, Nelson and Sessions worked on a bill that would reduce the number of H-1B visas from 85,000 to 70,000 a year. The filing of that bill came following reports Disney and other companies are using the visas to cut costs at the expense of American workers.

On Tuesday, more than 1,200 faculty members from law schools around the nation wrote to Grassley and Judiciary ranking member Diane Feinstein, calling on them to reject the Sessions nomination.

“Senator Nelson always appreciates hearing from his constituents and will certainly take their views into consideration if Sen. Sessions’ nomination comes before the full Senate for a vote,” said Nelson spokesman Ryan Brown.