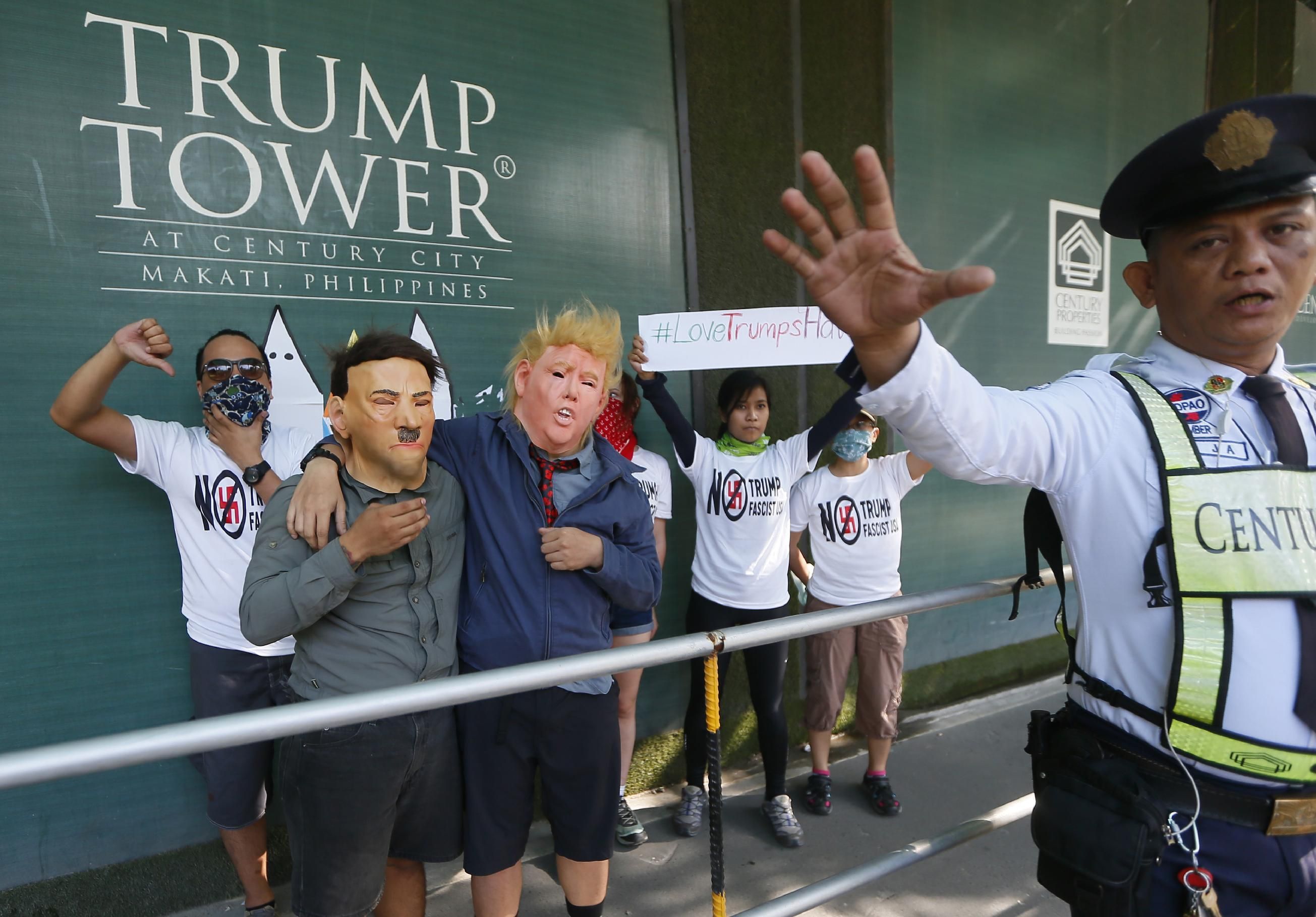 President Donald Trump‘s inaugural speech promised “America first” policy led by a forceful executive, in contrast to the coalition building and international conferences which have featured strongly in past administrations.

The billionaire businessman and reality television star — the first president who had never held political office or high military rank — promised to stir a “new national pride” and protect America from the “ravages” of countries he says have stolen U.S. jobs.

“This American carnage stops right here,” Trump declared. In a warning to the world, he said, “From this day forward, a new vision will govern our land. From this moment on, it’s going to be America first.”

A look at some reactions from around the world:

Like many in the Afghan capital of Kabul, restaurant owner Mohammad Nahim watched the presidential inauguration ceremonies but was disappointed to not hear any mention of Afghanistan.

“Trump did not mention a word about Afghanistan in his speech and the salaries of the Afghan army and police are paid by the U.S.,” he said. He added that if the U.S. stops helping Afghanistan, “our country will again become a sanctuary to terrorists. I hope Trump will not forget Afghanistan.”

Mohammed Kasim Zazi, a shopkeeper whose home is in eastern Afghanistan’s Khost province, where the feared Haqqani network is prominent, said he expected Trump to stay focused on Afghanistan.

“Trump said he will finish the terrorists in the world and that has to mean that Afghanistan will remain in the sights of the U.S.” said Zazi.

Chief Executive Abdullah Abdullah said he was encouraged by Trump’s speech to soldiers in Bagram. “There he announced his support to the troops and the continuation of support for their troops here and strengthening their troops, which is a good and elegant step and I am sure that our cooperation in other areas will continue as well.”

Perhaps no country was watching the speech more closely than Mexico. Trump has made disparaging remarks about immigrants who come to the United States illegally and sought to pressure companies not to set up shop in Mexico by threatening a border tariff on goods manufactured there and exported to the United States.

So Trump’s talk of “protect(ing) our borders,” ”America first” and “buy American and hire American” had particular resonance in America’s southern neighbor.

Ricardo Anaya Cortes, president of the conservative opposition National Action Party, called for “the unity of all Mexicans, unity in the face of this protectionist, demagogic and protectionist speech we just heard. Unity against that useless wall, against deportations, against the blockade of investment.”

“The challenge is enormous. … We demand the federal government leave aside tepidity, that it tackle with absolute firmness and dignity the new relationship with the United States,” Anaya said.

The United States is by far Mexico’s largest commercial partner, buying some 80 percent of its $532 billion in exports in 2015. Mexico is the second-largest market for U.S. exports.

“At least the word ‘Mexico’ was not heard in the speech. Nevertheless one can expect the United States to launch a hyper-protectionist project,” said Ilan Semo Groman, a researcher at Iberoamericana University.

If Trump truly moves to block or drive away U.S. investment in Mexico, Semo said Mexico should focus its commercial efforts on other countries.

— “I congratulate @realDonaldTrump on his inauguration. We will work to strengthen our relationship with shared responsibility.”

— “We will establish a respectful dialogue with the government of President @realDonaldTrump, to Mexico’s benefit.”

— “Sovereignty, national interest and the protection of Mexicans will guide the relationship with the new government of the United States.”

A group of retired government officials gathered after morning prayers for a walk in a sprawling park in the heart of the federal capital of Islamabad and the topic of their conversation was President Trump’s inaugural speech.

They expressed concern that Trump would target the Islamic world, particularly Pakistan, because of his campaign rhetoric about Muslims as well as his inaugural speech in which he promised to eradicate Islamic terrorism worldwide. Pakistan has often been accused of harboring militant insurgents and declared terrorist groups that have targeted neighboring India, against whom Pakistan has fought three wars, as well as Afghanistan. Pakistan denies the charges.

“Likely there is more trouble in store for the Islamic world and our country will take the most brunt of the harsh treatment from President Trump administration,” said Mohammad Afzal.

His sentiments were echoed by Shafiq Khan, who said “the one main thing that the new president mentioned about the world outside America is to tackle Islamic radicalism and that should be the matter of concern for all of us.”

Amanaullah, a school teacher in Islamabad, feared Trump’s reference to eliminating radical Islamic terrorism. “I think under this name he wants to malign and eliminate Islam,” he said.

Umair Khan, an engineer, said of Trump: “Let him taste the burden of government and get settled, I am sure he will calm.”

Some Tokyo residents are worried that Trump’s “America first” policy will usher in an era of populism and protectionism at the expense of the rest of the world.

Tadashi Gomibuchi, who works in the manufacturing industry, recorded Trump’s inauguration speech overnight as he was keen to hear what the new president had to say.

“Trump is trying to make big changes to the way things are. Changes are good sometimes, but when America, the most powerful, loses stability … it’s a grave concern,” he said. “If you take his words literally, it may destabilize the world going forward and I’m really worried. I hope things will lead to a soft landing.”

Retiree Kuninobu Inoue, who lived in the U.S. during the 1990s, is concerned about trade frictions between Japan and the U.S, citing Trump’s decision to withdraw from the 12-nation Trans Pacific Partnership.

“Japan-U.S. relations are not just about security. Our good relations rely so much on trade,” he said.

Protectionist policies such as the withdrawal from TPP and renegotiation of NAFTA will have a negative impact on the global economy including Japan’s, said Akio Mimura, head of the Japan Chamber of Commerce and Industry.

“These policies only enhance protectionist and populist movement spreading around the world, and could largely shake the free trade system that has supported global growth,” he said.

In his congratulatory message to Trump, Japanese Prime Minister Shinzo Abe stressed the importance of the Asia-Pacific region as a source for growth but also tensions.

“In the 21st century, while the Asia-Pacific region is the source of the global economic growth, the security environment of the region is becoming more severe,” he said.

CHINA BRACES FOR TROUBLE AHEAD

The newspaper said in a Saturday commentary following Trump’s inauguration that “dramatic changes” lay ahead for the U.S. and the global economic order.

“Undoubtedly, the Trump administration will be igniting many ‘fires’ on its front door and around the world. Let’s wait and see when it will be China’s turn,” it said.

The paper noted that Trump blamed foreign trade policies for failing to put “America first,” and said trade tensions between the U.S. and China seemed “inevitable within the four years ahead.”

The paper says it expects that the Trump administration, in seeking to bring factories back to the U.S. from China, will use the U.S. government’s relations with Taiwan as “merely a bargaining chip for them to put trade pressure on China.”

“The new U.S. administration’s policy toward China is not clear now. In my view, Trump will deal with China like a businessman, especially on trade negotiations,” Zhang said.

Taiwanese President Tsai Ing-wen tweeted her congratulations to Trump, saying: “Congratulations @realDonaldTrump. Democracy is what ties Taiwan and the US together. Look forward to advancing our friendship & partnership.”

Trump didn’t mention the self-ruled island in his speech, but he angered China and broke diplomatic protocol by talking by phone with Tsai shortly after winning November’s election.

He has said earlier that Washington’s “one China policy” under which it recognized Beijing in 1979 was open to negotiation, and questioned why the U.S. should be bound by such an approach without China offering incentives.

Some in South Korea worried that President Trump would ask Seoul to shoulder a bigger share of the cost of U.S. forces stationed in South Korea as a deterrent against aggression from North Korea, or that their country will be caught in a conflict between the U.S. and China.

“I think the biggest challenge is the national defense,” said Park Geon-rok, a 30-year-old designer, adding that South Korea was “heavily influenced by the U.S.”

In an editorial, the English-language JoongAng Daily said South Korea’s relations with the U.S. under Trump will face a challenge as the new leader will likely ask Seoul to pay more for the cost of the U.S. military forces in the country, and renegotiate a bilateral free trade agreement. But the paper also notes it is “fortunate” that Trump has a strong position on North Korea’s nuclear weapons.

There were concerns about potential conflicts between the U.S. and China, South Korea’s key business partner. Kim Kyung-jin, a spokesman for the opposition People’s Party, said that the international economic order might collapse as the U.S. seeks its own economic interest. Kim urged Trump to ease such worries.

“There is a possibility of us becoming an innocent bystander who gets hurt in a fight,” said Nam Hae-sook, a 62-year-old homemaker. “Also, I think President Trump will be different from President-elect Trump. I think things will work out.”

In place of impeached President Park Geun-hye, Acting President and Prime Minister Hwang Kyo-ahn said in his congratulatory message to Trump that South Korea wishes to bolster the already close ties with the U.S. and cooperate on stopping North Korea’s nuclear development.

Among dozens of young, urban Indians who watched Trump’s inauguration and speech at a club in a New Delhi, the 27-year-old Jigar Gorasia said getting work visas for professionals and green cards will become a problem.

“It is going to be a little bit challenging for those,” said Gorasia, who studied and worked in Chicago before moving back to India last year.

Divya Narayanan, a 21-year-old student of journalism, said that Trump as president worried her. “Someone at the level of the U.S. president coming out and saying things which are bigoted, which are sexist, it sets a precedent for other people in the country, right?”

“Protectionist Trumpet: Buy American, Hire American,” was the headline of The Times of India newspaper.

A Vietnamese analyst said Trump’s speech was disappointing because it mainly served the domestic audience.

“I think this speech would be right for an election campaign, but not an inauguration speech,” said Nguyen Ngoc Truong, president of Hanoi-based private policy think-tank Center for Strategic Studies and International Development.

“It should not be that simple because in an inauguration speech, you must introduce an objective and multi-faceted vision, not just one-sided vision to the American public,” he said. “I don’t think Trump could have a magic stick to be able to manage America to realize the goals that he outlined.”

“Normally these speeches are used to rally and unite people,” he said. “It was, again, more bluster.”

Rucinski was among some 8,000-10,000 people who attended a Women’s March anti-Trump rally in Sydney’s Hyde Park.

The Australian newspaper’s Foreign Editor Greg Sheridan wrote that “Trump answered one big question with his inauguration address: There is to be no transition from campaign Trump to presidential Trump.”

“And his inauguration address made it clear that he intends to govern just as he campaigned, taking swings at his opponents, extolling his populist mantras, speaking in the slightly weird argot of contemporary down market celebrity,” he added.

previousWomen descend on DC to push back against new president