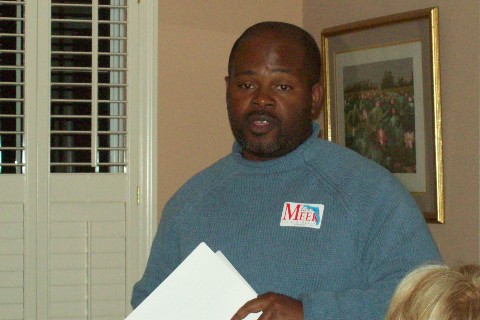 Despite a decision to now work for former Republican Congressman David Jolly, Vito Sheeley says he remains a Democrat.

In one of the more recent (and enigmatic) personnel developments in Tampa Bay area politics, Sheeley announced Monday he was leaving the office of Charlie Crist,  to work for Jolly as a senior adviser.

The move came just days after reports that Sheeley was going to work for St. Petersburg Mayor Rick Kriseman‘s office, along with (unreported) rumors Crist had jettisoned Sheeley early last week, and rehired him by week’s end.

In a just-released statement, Sheeley says: “Many have and will continue to question my reason for leaving Congressman Crist. That is an answer that will remain between Charlie Crist and me.”

He then says service to his community “outweighs any political party or title.”

A St. Pete native, Sheeley worked as an outreach coordinator for Tampa area Congresswoman Kathy Castor, whose district used to include parts of South St. Petersburg, before leaving in 2016 for Crist’s congressional campaign.

To some, the hiring decision remains perplexing, considering Jolly is no longer a sitting congressman, announcing Monday he has not made a decision about running again in 2018.

However, in hiring Sheeley, he has indeed invited speculation that he intends to run next year.

Sheeley’s statement in full, entitled “I’m Still a Democrat,” is below:

Public service is a part of my DNA. My mother was a social worker, my grandmother was an educator, and my grandfather a pastor. I was raised to believe that serving my community and country is the most important calling one can have. I still believe that today. I have worked in public service as Outreach Coordinator for Congresswoman Kathy Castor, Outreach Director for Charlie Crist’s Congressional Campaign 2016 and, until recently, Congressman Charlie Crist’s District Director.

My passion is to see that others have the same opportunities that I have been given.

Many have and will continue to question my reason for leaving Congressman Crist. That is an answer that will remain between Charlie Crist and me. My service to my community outweighs any political party or title. You see, for me, I don’t see Democrat or Republican, I see people. I see children not receiving a quality education, I see poverty, I see families searching for job security and a better way to provide. I recognize the injustice within our Justice System, I’m appalled at witnessing our voting rights being stripped away to benefit those in power or those who would like to remain in power. These reasons and more are the reason why I fight for a solution. I will be working with David Jolly to continue policy work locally regarding education, veterans, urban affairs and other Pinellas priorities.

I respect David Jolly. I respect his service to his community and country. We both share a common belief, we love this community.

David Jolly respects my Democratic views, and together I believe we can bring balance to our divided country. In these days and times, we as a nation have forgotten what is important. What is important is “Treating others as one would wish to be treated;” this is the Golden Rule. As I continue this journey, I will fight for what I believe is important. That is “You,” the people … of Pinellas County, Democrat or Republican, your voice matters.

We face serious issues together we can overcome.

I would like to thank everyone who supported me in this past week. Your overwhelming encouragement has meant a lot to my family and I.