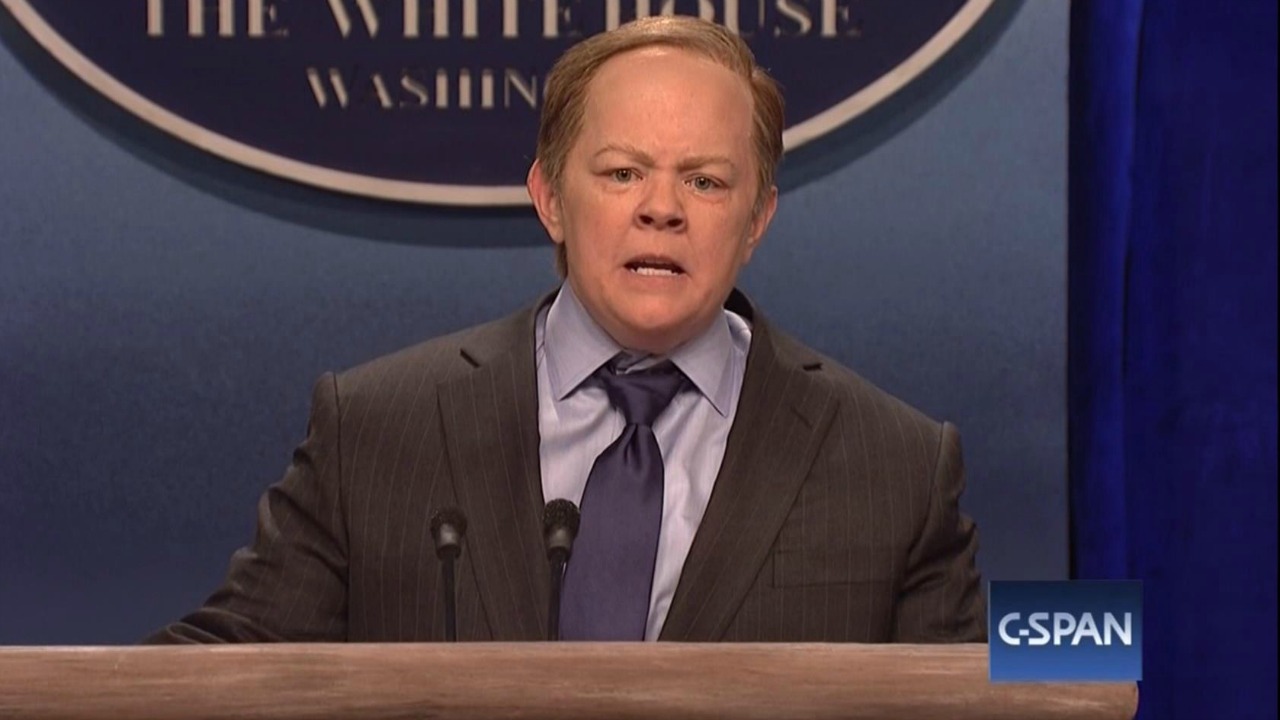 Melissa McCarthy lampooned White House press secretary Sean Spicer in a “Saturday Night Live” sketch where she taunted reporters as “losers,” fired a water gun at the press corps and even used the lectern to ram a Wall Street Journal journalist.

“SNL” opened with Alec Baldwin reprising his President Donald Trump and phoning foreign leaders with chief strategist Stephen Bannon by his side. Bannon, with hood and scythe, was portrayed as the grim reaper. He nodded affirmatively after the successive calls to countries like Australia and Germany dissolved into Baldwin vowing, “Prepare to go to war.”

But it was McCarthy’s mid-show sketch impersonating a pugnacious Spicer that sparked the bigger response in the NBC show’s second episode since the inauguration. McCarthy’s Spicer insisted that “no one was sad” at Trump’s supreme court nominee unveiling. “Those are the facts forever,” she said, before accidentally giving her email password. Off to the side, she kept a CNN reporter, chastised as “fake news,” jailed in a cage.

“I want to begin tonight by apologizing on behalf of you to me for how you have treated me these last two weeks,” McCarthy said in opening the mock press briefing. “And that apology is not accepted.”

Parodying a similar exchange, she then haggled with reporters over the use of the word “ban” to describe Trump’s recent immigration order. Trump and Spicer have both used the word, but McCarthy defended it: “He’s using your words. When you use the word and he uses them back, it’s circular using of the word and that’s from you.”

When a Wall Street Journal reporter asked if she was OK, McCarthy picked up the lectern and charged. She warned that she would put the reporter “in the corner with CNN.”

Host Kristen Stewart began the show with a monologue recalling Trump’s tweets about her romantic life. In 2012 when the actress dated “Twilight” co-star Robert Pattinson, Trump tweeted that Pattinson should “dump” her and that he could “do much better.”

“To be fair, I don’t think Donald Trump hated me,” Stewart said. “I think he’s in love with my boyfriend.”

She added: “The president is not a huge fan of me. But that is so OK. And Donald, if you didn’t like me then, you’re really probably not going to like me now. Because I’m hosting ‘SNL’ and I’m, like, so gay, dude.”

Though Trump has frequently criticized “SNL” and its sketches skewering him, he had not responded to Saturday’s show as of early Sunday afternoon.

As Stewart began introducing the show, she let slip an expletive. She immediately apologized and guessed that she wouldn’t ever be allowed to host again.