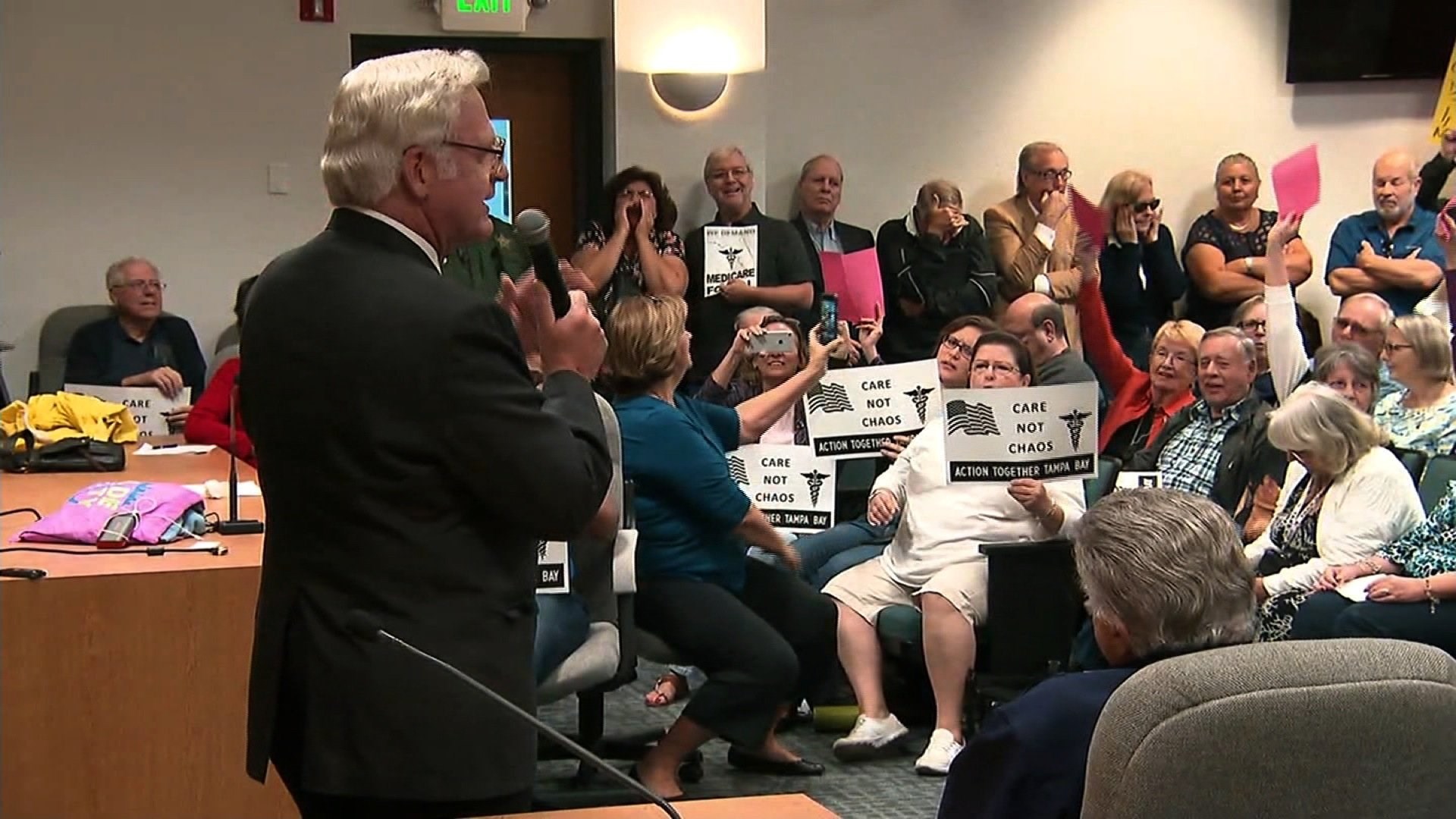 Pasco County Republican Executive Committee Secretary Bill Akins is under fire  after a story about his history of pushing out racist jokes and conspiracy theories on social media was published Sunday by the Washington Post.

The reason that the previously little-known local Republican even earned the interest of the Post was because of what happened on Saturday at Congressman Gus Bilirakis raucous town hall meeting in New Port Richey. That’s where Akins told a crowd of mostly supporters of the Affordable Care Act that it was a fact that they would face “death panels” at the age of 74 under the legislation.

“Death Panels” were often mentioned by Tea Party activists at town hall meetings back in 2009 when the ACA was initially being discussed. PolitFact called the term the “Lie of the Year” in 2009.

As soon as Akins finished pronouncing “panel,” the crowd erupted into arguably the loudest amount of jeering from the two hour meeting.

“OK, children. Alright, children,” Akins stated, mocking the crowd in an exchange that was repeatedly by CNN and MSNBC on Saturday.

Akins apparently deleted all of his posts on his Facebook page on Saturday night, after the story by the Post’s Dave Weigel went live. The earliest posts now available to see on his page go back to 2011.

Among the controversial statements that Akins made included comparing black protesters to monkeys, accusing former President Barack Obama of being a foreign-born Muslim, and that Bill and Hillary Clinton had potential trial witnesses against them murdered.

He claimed that former Supreme Court Justice Antonin Scalia might have been murdered, that “Climate Change” is a globalist hoax, and that Nancy Pelosi is mentally handicapped.

The Pasco County GOP Facebook page was filled with angry responses on Sunday.

“Rep Bilirakis SR was a truthful and honorable man,” wrote Chris Perfusion Clay. “The present Representative (who used to be my Representative until they gerrymandered again) makes a fool of himself by agreeing with a delusional Bill Akins. Mr Akins Facebook page is an example of why Republicans are seen as seriously problematic.”

Pasco County State Committeeman Bill Bunting said the revelation about Akins social media history was a definite “black eye for us, no question about it.”

At the town hall, Akins identified himself as being the Secretary of the Pasco REC. He was only recently elected to that post.

Akins did not return our request for comment on Sunday afternoon. Nor did Republican Party of Florida Chairman Blaise Ingoglia.