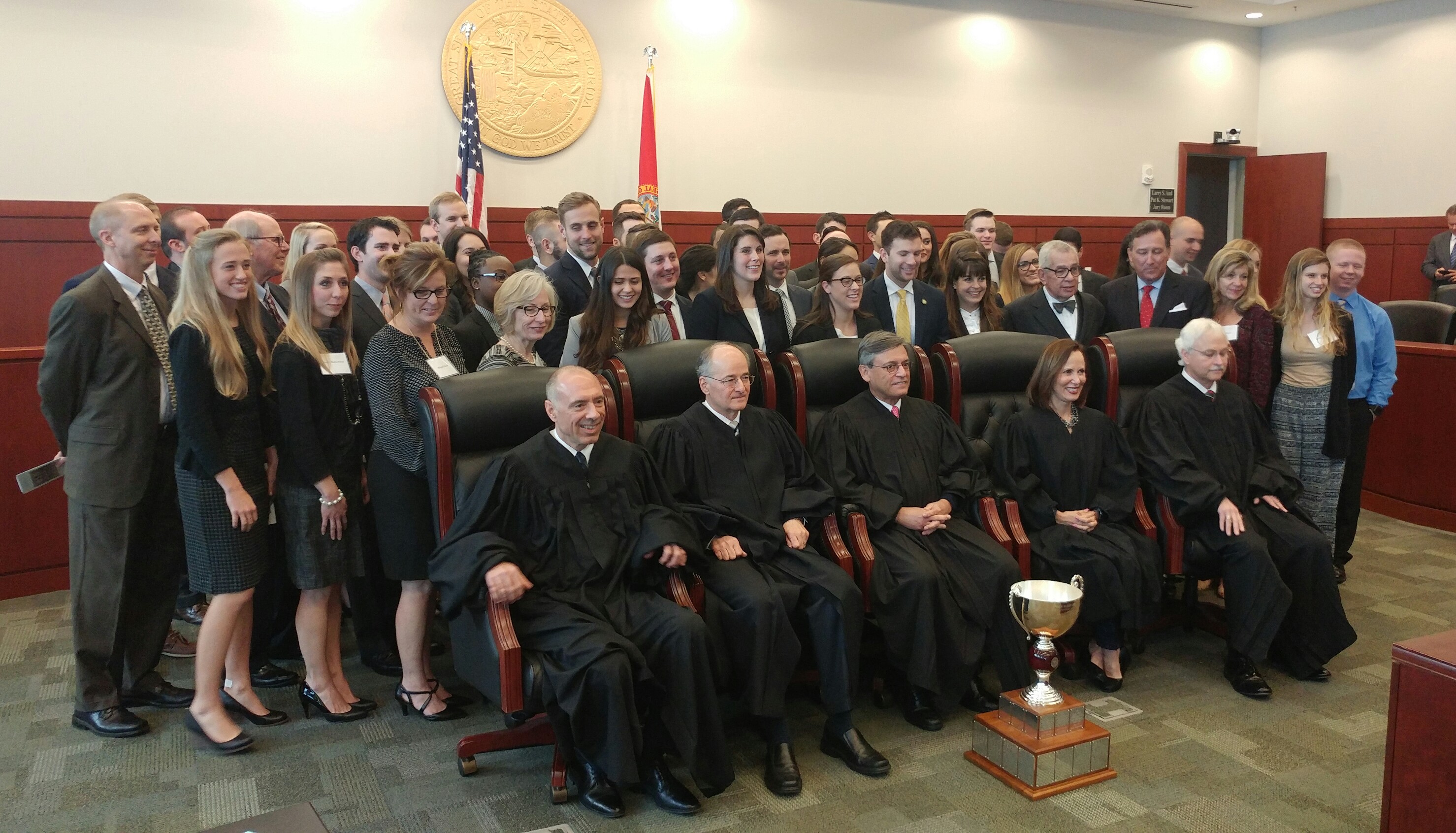 The black-robed justices who filed solemnly into a courtroom at the University of Florida law school Thursday morning were not the justices of the U.S. Supreme Court, but they were announced as if they were.

“All persons having business before the Honorable, the Supreme Court of the United States, are admonished to draw near and give their attention, for the court is now sitting,” a bailiff boomed out as students, law professors and attorneys with Holland & Knight — the law firm that sponsored the event — stood respectfully.

But when Florida’s chief justice, Jorge Labarga, took a seat behind the long desk at the front of the room, along with four of his colleagues from the state’s high court, and said, “I’m actually Justice Roberts” — referring to the chief justice of the nation’s high court — laughter and applause erupted throughout the room.

Ignoring the outburst, Labarga continued. “We’re here today to decide over … ah, the case of …” he flipped through a file before him, “Chilton State University and Jane Doe.”

Over the more than two hours that followed, two law students representing that fictional university and two students representing a fictional female student presented arguments explaining why the university had, or did not have, responsibility under the federal law known as Title IX to investigate her allegations that she was raped at an off-campus event by a male student who had a leadership role at the university that they both attended.

Title IX prohibits discrimination on the basis of sex in any federally funded education program or activity. The law also addresses sexual harassment and rape of students.

In the fictional case presented at UF’s 33rd Annual Raymer F. Maguire Appellate Advocacy Competition, events, characters, circumstances and questions of law — discussed by the students and the justices — sounded strikingly similar to a high-profile lawsuit that another “Jane Doe” brought in 2015 against Florida State University. That lawsuit was resolved last year, when FSU paid a historic Title IX settlement — $950,000 — after Erica Kinsman accused the university’s star quarterback at that time, Jameis Winston, of raping her at an off-campus location in 2012. (Kinsman eventually identified herself publicly in a documentary film, “The Hunting Ground,” about sexual assault on college campuses in the United States. According to the film, college administrations often fail to adequately address the assaults.)

In the fictional lawsuit used in the competition at UF, as well as in the lawsuit brought against FSU, the female student who said she was raped as a freshman withdrew from the school, complaining that the university had not adequately responded to her accusations.

In the case at FSU, Kinsman accused the university of hiding her complaint “to protect the football program.” A year after she identified Winston to police in Tallahassee, he won the Heisman Trophy and led the Seminoles to FSU’s third national championship. The state attorney’s office in Tallahassee investigated, and FSU held a disciplinary hearing, but no charges were brought against Winston.

In the fictional case — which the American Bar Association created last year for use in appellate advocacy competitions throughout the United States this year — the accused student was promoted to president of a fraternity following the rape accusations against him.

The case dealt with “topics that are very relevant to our age and time,” said Aaron Holman, a second-year law student from Winter Park. He said that, as his team prepared for the competition, representing fictional “Chilton State University,” the case at FSU “has come up in discussion as something very similar.”

The Chilton case is an appeal — to justices presumed to be sitting on the U.S. Supreme Court — and addresses the question of “duties of educational institutions to adjudicate allegations of student-on-student assault that occurs off-campus” and “whether Title IX allows a claim for relief against a university that refused to investigate an allegation of student-on-student harassment because it occurred purely off-campus and outside the context of any university program.”

At the competition at UF, Justice Barbara Pariente, referring to what she described as a “proliferation of sexual assaults on campus,” said “I’m sure fraternities are the breeding ground for many of these sexual assaults, when drinking takes place.”

But Seth Donahoe, a third-year law student from West Palm Beach, said that when a sexual assault is alleged to have occurred away from campus and outside of university-sponsored activities, for the university “to embark on an ad hoc, informal investigation would subject the school to potential different types of liability because they are not considering the due process rights of the accused.”

His teammate Sara Altes noted how “in 2001, the Department of Education went through formal rule-making procedures that set out how a school must go through allegations of sexual assault. This would provide and ensure safety for both the accused and those who experience sexual harassment.”

She added, “While it is incredibly unfortunate what happened to the respondent, Title IX is not the proper legal remedy.”

Steve Cline, a second-year law student from Virginia, represented the respondent, Doe, in the Chilton case, as did Brandon Cook, a second-year law student from New Smyrna Beach. Referring to the continuing effects suffered by Doe from the on-campus presence of the alleged perpetrator of an off-campus assault, Cline said the university should “look into the allegations to ensure that there is no continuing effect on campus.”

Cook agreed that educational institutions are obliged under Title IX to investigate after students allege an off-campus assault from another student, adding that “the university’s duty to respond to reports of sexual assault or harassment is independent of any duty of police enforcement.”

But Justice C. Alan Lawson noted, “You really are saying that each university in this country has to come up with means and mechanisms and personnel and resources to independently investigate sexual assaults between students, no matter where they occur.”

At the conclusion of the competition, Labarga announced the team representing the university as the winning team and Donahoe as the winning “oralist.”

After the competition, Donahoe said his challenge had been “reigning in a really complex, administrative law problem to very simple, deliverable points in oral argument. It’s not necessarily the law was or was not favorable. It’s just very nuanced.”

His teammate, Holman, agreed. “There are fair and strong arguments on both sides. There is no clear-cut answer.”

He described the competition as “a showcase for our school and a practice for the national tournament,” which is set for Chicago in April. Next month, the teams from the UF law school plan to attend a regional competition in Boston.