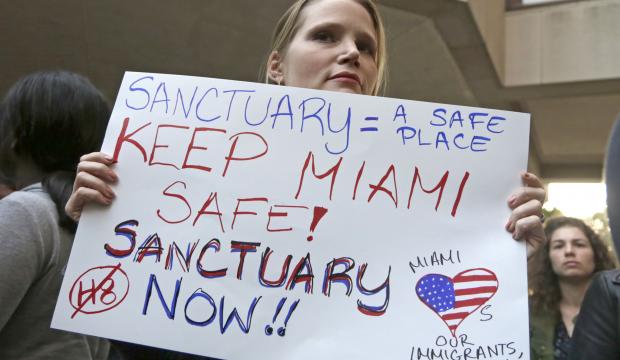 Yalaha Republican Rep. Larry Metz‘s bill (HB 697) would force any “sanctuary city” or county in Florida to remove all formal or informal policies shielding undocumented immigrants from federal custody. It passed the House Subcommittee on Local, Federal and Veterans Affairs on a 9-5 vote on Tuesday.

The legislation would fine local governments that don’t comply with immigration officers between $1,000 to $5,000 a day. It requires local officials to report violations, but exempts employees of school districts and educational records. The proposal leaves local officials open to being sued if a Florida resident is injured by an undocumented immigrant because of a sanctuary policy.

Cities and law enforcement agencies would also be barred from having laws or policies blocking communication with federal immigration agents.

Taxpayers would have to foot the bill for enforcing federal immigration policies — with no guarantee of federal reimbursement.

“We are very very concerned that the underlying bill is unconstitutional,” warned Orlando Democrat Carlos Guillermo Smith, who offered up seven different amendments to the bill, all of which were shot down by the GOP-controlled committee. He said that detainer requests “are not worth the paper that they are printed on.”

Miami Democrat Daisey Baez, a native from the Dominican Republican and a solider with the U.S. Army, said that it was a hostile environment when she served as a young soldier in Central Texas when she spoke limited English, but “I have never felt as unwanted and as vilified as I have felt now,” she said as her voice broke. “We are not criminals.”

Baez called the legislation “misguided,” and an example of “big government, of paranoia and persecution. That is not the nation that we are.”

For such a controversial and sensitive issue, the debate was mostly civil. Mostly.

“This is one step towards Nazism in the United States,” said Gail Perry with the Communications Workers of America.

In his closing statement, Metz said that his grandparents were immigrants from Germany, but that it was important to distinguish between legal and illegal immigration.

In late January, President Trump signed an executive order pulling all federal funding from so-called sanctuary cities that refuse to cooperate with Immigration and Customs Enforcement and other federal officials looking to weed out and deport undocumented people. A day after that announcement, Miami-Dade County Mayor Carlos Gimenez signed an order demanding that Miami-Dade County’s Department of Corrections and Rehabilitation comply with every aspect of Trump’s plan.

The legislation is being sponsored in the Senate by Fernandina Beach Republican Aaron Bean (SB 786). Abruzzo predicted it would die in the Legislature’s upper chamber.

previousFailed Eureka Garden HUD inspection: whose fault is it?