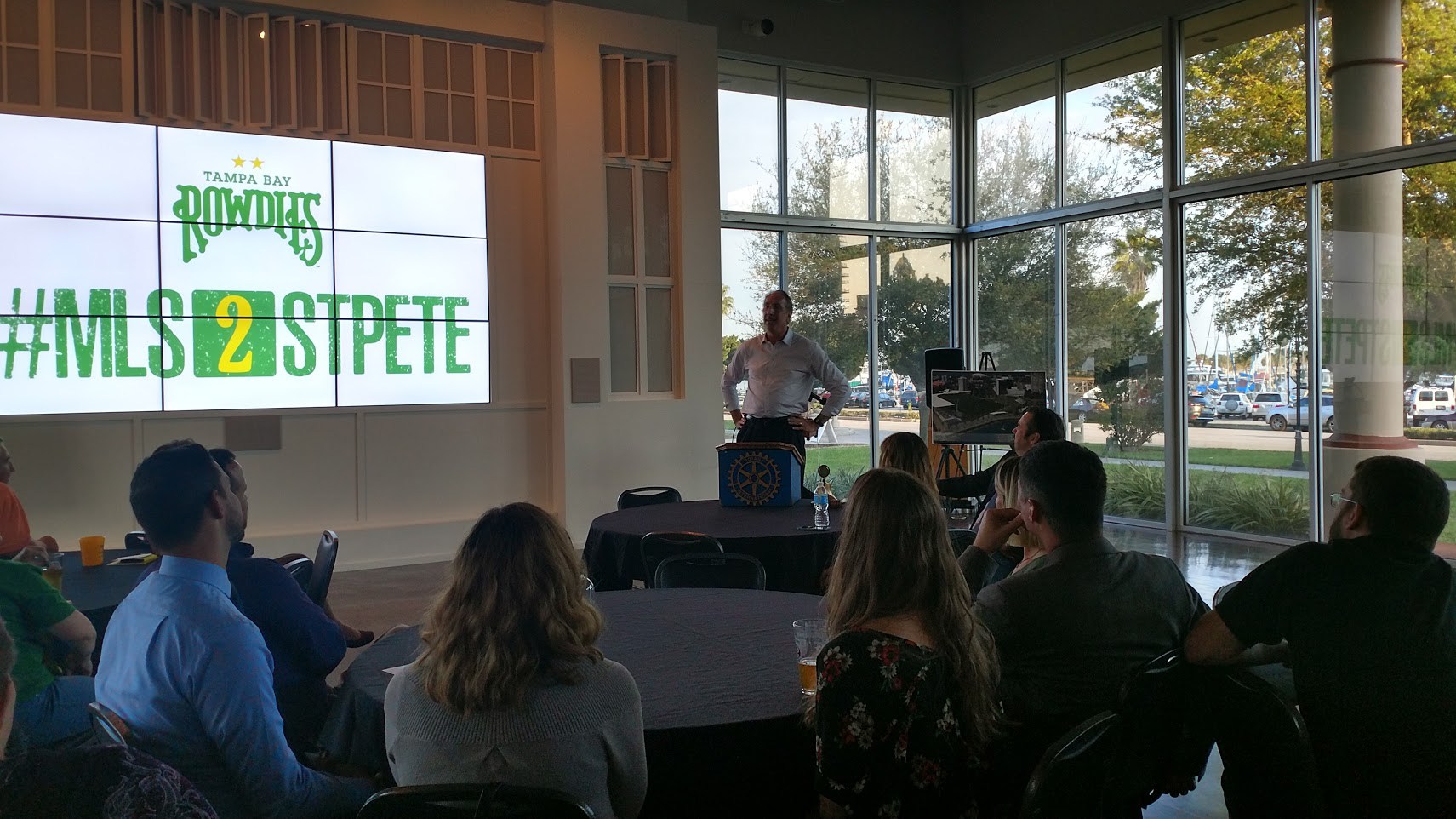 This week, St. Petersburg residents start receiving ballots for the May 2 referendum asking to give the Tampa Bay Rowdies a 25-year lease for Al Lang Field.

St. Pete Entrepreneur Bill Edwards is advocating — and paying for — the measure.

However, considering the questions fielded in public forums by Edwards’ spokesperson Rick Baker, the referendum will be something of an easy sale.

Baker, the former (and possibly future) mayor, is making his pitch to neighborhood and community groups throughout the city.

Speaking to about two dozen members of the Sunset Rotary Club at the St. Petersburg Museum of History, Baker began with a bit of recent history. He spoke of St. Pete’s barren downtown in the 1980s, to his declaration to become mayor in 2002, where the goal was for his city to become the “cultural center of Florida.”

“We made it the cultural center,” Baker says, making comments that could have easily come from the campaign trail.

“We stole the Florida Orchestra from Tampa,” he adds, saying they were all part a mix that led to St. Petersburg becoming such a dynamic city.

Baker’s main pitch – a bigger stadium for the Rowdies, part of a bigger league – is that it is another “thing” making St. Pete special: “Some people love the Dali, some people love Janus Landing.”

Although a simple call to Stuart Sternberg can serve as a reminder exactly how sensitive St. Petersburg residents are about the waterfront, Edwards’ proposal faces little controversy.

First of all, it’s not costing taxpayers a cent. Edwards is footing the bill for the referendum’s estimated $250,000 cost.

If Major League Soccer allows the Rowdies inside its private club (11 franchises are vying for four expansion spots), Edwards would also have to pick up the tab for construction and expansion, which is estimated at around $80 million.

And Edwards and investors would have to pay the $150 million franchise fee to get into the MLS.

Unlike the Rays proposal that first became known in 2007, the Rowdies aren’t asking to expand the physical footprint of the venerable Al Lang Field, built in 1947 and restructured in 1976. Plans for the structure preserves its open views of the water, and expands pedestrian rights-of-way to include sidewalks and cafe seating.

“To bring some of that Beach Drive experience,” Baker explains.

“I did not want to mess up the Grand Prix,” he says about the stadium expansion. “We wanted to add some restaurant facilities for the Saturday Morning Market, work it so that everybody will be with us. “

The biggest questions Baker faced from the public seems to be about parking. For example, he’s had to shoot down rumors about a new parking garage at Demens Landing.

The former mayor cites a 2016 parking study by the city that found that there are 9,500 public parking spaces available in the downtown core. A study of the availability for a Saturday night 8 p.m. game shows 51 percent of those spaces were unused at that time, Baker says, adding that the Edwards Group will continue to work with the city’s traffic department.

Baker also fields questions about bicycle access. “We intend to have access to the trails that lead right into the stadium,” he says, adding that there will be “sufficient” bike parking.

The team expects 16 percent of the attendees to be coming to games via alternative forms of transportation, Baker says, either through public transit, biking, pedestrian walk-ups and ridesharing services.

For the project, the Rowdies are working with Populous, one of the world’s largest architectural firms specializing in the design of sports facilities and arenas better known in the U.S. under its earlier moniker, HOK Sports.

Populous representatives say the firm would be able to reconstruct the stadium without affecting the main field, meaning that the Rowdies would not need to stop playing in St. Petersburg if they get permission for the expansion.

“We’re very confident that this will be successful,” Baker told Rotary Club President Adam Hopkins, after he wondered if the market could support a bigger stadium.

Hopkins pointed to recent attendance woes affecting the Rays and the Buccaneers.

“My main priority is what’s good for the city,” Baker said before the meeting, describing how he connects with the public on the plan. “So, it helps that I really believe that this is a great thing for the city if we could make it all come together.”

Baker didn’t have to use the hard-sell to win support from the Tampa Bay Times editorial board.

On Thursday, a day after the former mayor spoke with editors about the plan, the Times published a full-throated recommendation for the referendum.