No. 20 on the list of Tampa Bay’s Most Powerful Politicians: Lawrence McClure

No. 21 on the list of Tampa Bay’s Most Powerful Politicians: Ed Hooper 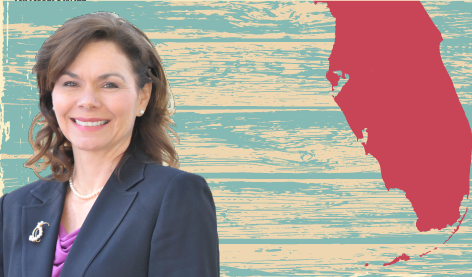 Virginia “Ginger” Delegal is one step closer to becoming the next Florida Association of Counties executive director.

Delegal had been selected by the FAC Executive Committee in February, and confirmed by the Board of Directors this week. She has been interim Executive Director since Feb. 9.

President Kathy Bryant and Immediate Past President Barbara Sharief now will begin final contract negotiations with Delegal. The contract, when complete, will go before the Board for final approval.

Ms. Delegal has almost 25 years of experience working with Florida’s local governments. She began her career at Nabors, Giblin & Nickerson where she was a shareholder and a member of the General Governmental Law Group. As a part of that group, Ms. Delegal’s practice represented local governments primarily on issues of finance and tax, home rule, and other constitutional matters.

Ms.Delegal continued her close relationship with local governments by joining the team at the Florida Association of Counties as General Counsel in April of 2003. During her tenure at the Association she has served as chief legal counsel, fulfilling the corporate legal needs of FAC. In addition, she has led several successful pieces of complex statewide constitutional litigation on behalf of FAC and the counties including the first Supreme Court argument for FAC in decades.

In addition to this direct legal work, Ms.Delegal has expanded the breadth of support FAC offers to counties by managing the Florida Association of County Attorneys and the Florida Association of County Managers—two successful affiliate organizations that provide forums for county professionals to collaborate and learn together for the betterment of Florida’s counties.

Most recently, Ms. Delegal has also led the Association’s contractual management responsibilities to the Gulf Consortium, a local government entity created by the 23 Gulf Coast counties to fulfill statutory responsibilities on behalf of Florida under the RESTORE Act, a groundbreaking piece of federal legislation passed in response to the Deepwater Horizon Oil Spill.

Throughout her time with FAC, Ms. Delegal has also served the membership by filling in as interim Enterprise Director and interim Legislative Director during past times of organizational transition.

Finally, Ms. Delegal can frequently be found providing educational sessions for the Florida Counties Foundation’s Certified County Commissioner programs and in BoCC chambers around the state.