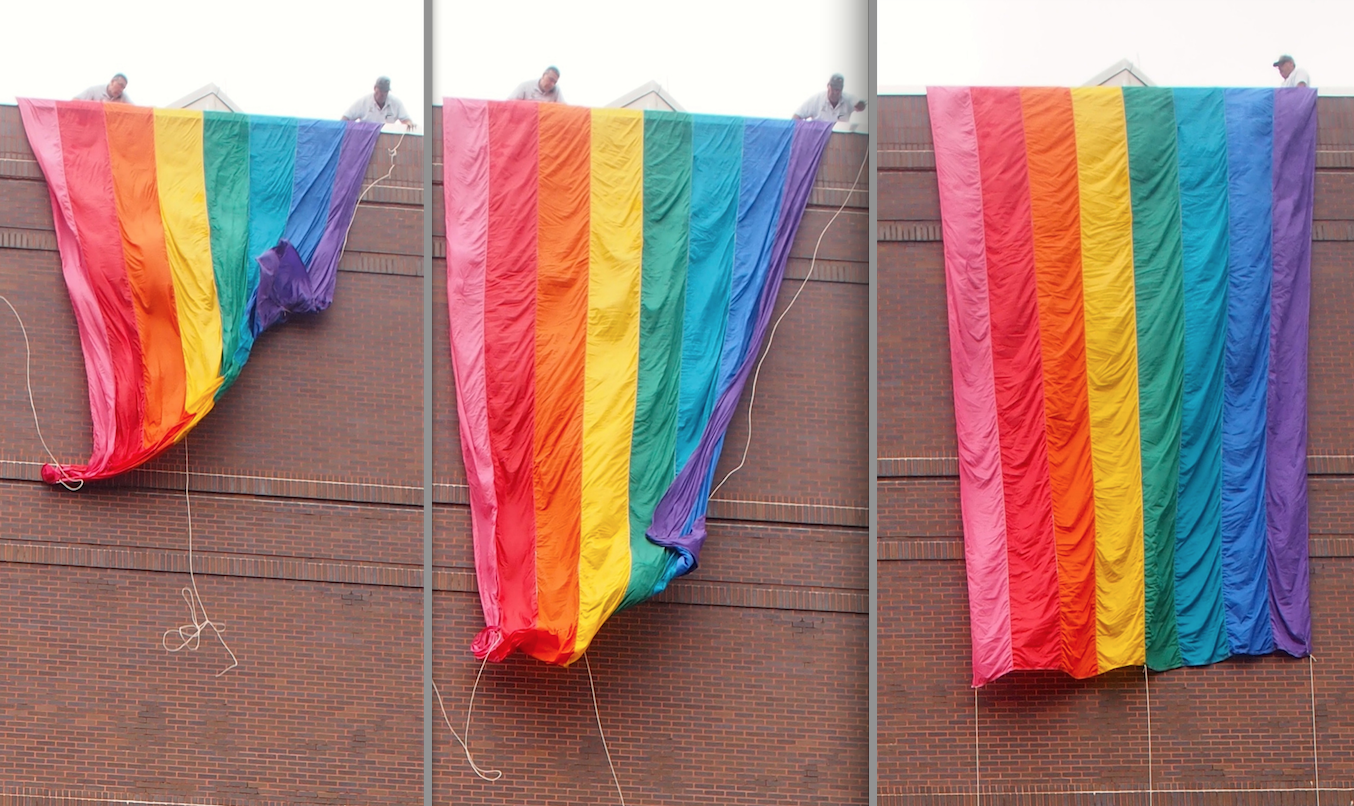 As Orange County once again unfurled a piece of the Sea-to-Sea Rainbow Flag in downtown Orlando, city and county leaders insisted its values of acceptance, understanding, diversity and inclusion shall forever define Orlando.

The anniversary of the catastrophic mass murder at Orlando’s popular gay nightclub Pulse on Latino night, June 12, 2016, began largely in celebration of what this community found within itself in the hours, days, months and now the first year since.

City Commissioner Patty Sheehan, introduced at the ceremony as the heart of Orlando, collapsed into the arms of Orlando Mayor Buddy Dyer as Section 93 of the miles-long Sea-to-Sea Flag, symbolizing the spirit of hope and love, was stretched into position on the Orange County Administration Building. Orange County Mayor Teresa Jacobs, other city commissioners, county commissioners, U.S. Rep. Darren Soto, Pulse nightclub owner Barbara Poma, and others all seemed ready to join in the hug.

The flag, Sheehan said, had long ago become ” symbol for LGBTQ unity in a time when we needed a way to symbolize the LGBTQ community.”

Dyer called the day a year ago “the darkest day, by far, in our city’s history.”

“And since that morning we’ve come together in so many different ways, to support the survivors, the victim’s families, the first responders,” Dyer said. “In the face of terror, this community showed the world what the best of humanity looks like.

“But even in a place as welcoming as Orlando there is still much to do, to honor the legacy of 49 beautiful souls we can’t simply be bystanders,” Dyer continued.

“Here in Orlando and Orange County our compassion and our culture of inclusion and acceptance have shined brightly over the past year. And it is so important that we continue to embrace the values of the Rainbow Flag,” Jacobs said. “It is those values that have made our community what it is. It is the values of acceptance, of understating and of inclusion. Together we must continue to erase those lines that separate us.

“We must continue on the charge that we were given on June 12, 2016, when 49 members of our community became our 49 Pulse angels,” Jacobs continued. “We have a moral obligation here on Earth to do our part to make sure their loss is never forgotten, and the change they wanted to see is the change that we insist happen in our time, in our lifetime, here in this community and across the world.”

Although Dyer noted that many of the values of inclusion already were in place in Orlando, this is a city changed. Jacobs was part of that change, as Sheehan said she had observed Jacobs have “an honest epiphany of understanding of the LGBTQ community” last year, becoming a heartfelt ally of Orlando’s LBGTQ community. The first time the flag was unfurled there, late last June, much of the city felt the same way.

“I can tell you candidly that ten years ago that we would never have been able to fly this flag, or that we could do so without an outpouring of outrage and objections,” Jacobs said. “I can also tell you we received one, single comment of disagreement, in a county 1.3 million large.”

previousNortheast Florida delivers $260K in May to Paul Renner committee