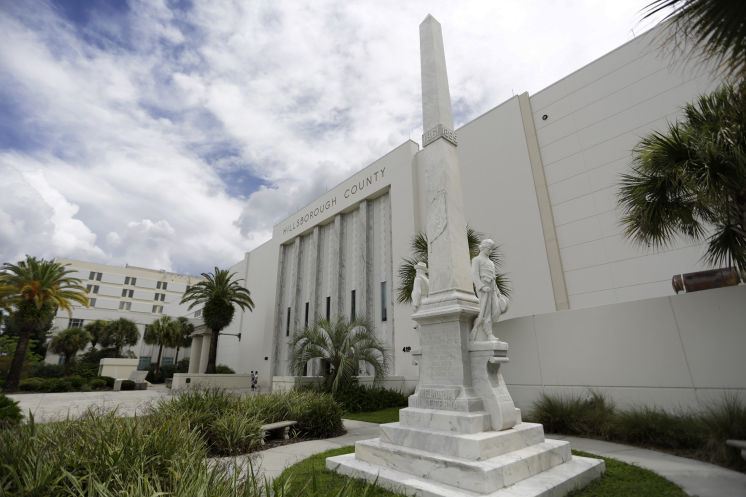 Led by two huge contributions, the private sector has raised well in excess of the $140,000 required by the Hillsborough County Commission to move a controversial Confederate monument in Tampa.

Bob Gries, the founder and managing partner of Gries Investment Funds in Tampa was watching CNN Wednesday night when he learned the Board of County Commissioners had reversed their position yet again on their decision regarding moving the monument.

The report said that unless the private sector came up with half the estimated $280,000 needed to move the statue, it would remain in front of the Hillsborough County Courthouse annex on Pierce St. in downtown Tampa.

“I was just really concerned, and I was embarrassed that Tampa Bay would be cast in a negative spotlight, and I just really thought what could I do to help change this and do the right thing,” said Gries at a press conference held at Tampa’s City Hall Thursday afternoon.

So Gries called up Tampa Mayor Bob Buckhorn first thing Thursday, saying he would kick in $50,000 that would not only hugely boost the effort to raise $140,000, but inspire others in the community to chip in as well.

On Thursday, the community did that big time, raising more than $40,000 in the 24 hours after the commissioners’ vote. Included in that effort was $5,000 from former Tampa Bay Buccaneer coach (now NBC football analyst) Tony Dungy and $1,000 contributions from Buckhorn and former Florida Chief Financial Officer Alex Sink.

The Greater Tampa Chamber of Commerce chipped in the other huge check of $70,000.

Though some will consider this a shining moment for the Tampa Bay area rising to the occasion to come together on what is an incredibly emotional and divisive issue, Buckhorn is having none of that.

“It was unprecedented, it was disheartening, it was not who we are and what this community believes in and what we stand for,” the mayor said of the board’s vote to outsource the decision to the community.

The decision to delay the vote had put an additional burden on the business community, Buckhorn added, and it was a “blatant attempt not to do the right thing,” which was to move the statue.

Wednesday was the third time the board had weighed in what to do with the 106-year-old monument, called “Memoria in Aeterna.”

In late June, the Commission stunningly voted 4-3 to keep the memorial in place, unlike other southern communities that have decided that such monuments were a relic of the Jim Crow past, and are no longer appropriate in 2017.

After the vote received local and national outrage, the board came back in late July, voting 4-2 to move the monument with Commissioner Sandy Murman changing her vote, but only if the money to move the statue was raised privately.

County Administrator Mike Merrill said that such an effort could not be guaranteed, and stated that the county would be responsible for raising the balance of the needed funds if the private sector could not come up with more than $200,000 required to move it.

Private fundraising had gone slow, with the man leading that campaign, attorney Tom Scarritt, saying he only had 60 days to raise the money or the issue would return to the board.

Commissioner Victor Crist brought the issue up again Wednesday, leading the move for the board to vote 4-3 for a 30-day timeline on Scarritt to raise $140,000.

If he could not, the statue would remain in place.

Buckhorn said he was disgusted by the board’s flip-flops.

“I’m not happy that they choose to throw roadblocks in the way of our progress,” he told reporters. “This was a decision that had been made, the outcome was secure, and at the last minute they changed the rules of the game, and that’s what I find unfortunate because some of them didn’t have the political courage to do what is morally the right thing to do.”

The monument will be moved to the Brandon Family Cemetery, a blow to Confederate advocates who have been determined to stop the county from moving the memorial.

“Isn’t it so sad that people are willing to pay money to disrespect American Veterans and destroy history,” said David McCallister with Save Southern Heritage Florida. “Too bad leaders of this movement aren’t putting this energy into making sure children go to safe schools, are taught to respect each other, or fixing stormwater runoff in our community.”

“If Tony Dungy and the Chamber used this effort to address real problems, imagine how great our community would be!” he added.

Later on Thursday, Save Southern Heritage Florida said they would go to court on Friday to attempt to block the removal of the monument.

Preliminary work on preparing for the statue to move has already been underway for a few weeks, with the county already expending $20,000 on the effort. That work was stopped Wednesday, and there is no word yet on when it will resume (County Administrator Mike Merrill was not immediately available for comment).

Earlier Thursday, President Donald Trump weighed in on the moving of such monuments, denouncing their removal as “sad” and “so foolish,” just days after white supremacists and neo-Nazis took to Charlottesville, Virginia, to violently protest the planned removal of a statue of the Confederate Gen. Robert E. Lee.

“We have a president who today doubled down on his remarks of two days ago,” Buckhorn said. “He chose a side. That side was not the better angels of America. That side was the hate groups and the Klan and neo-Nazi’s and the bigots in bed sheets that ran through this country in the South in the 40’s and 50’s. That was the side that he chose, and those code words and those dog whistles that he used in these comments send a signal to those who would engage in these kinds of behaviors that it’s OK. It’s not OK. Hate has no place in America, and it damn sure has no place in Tampa, Florida.”