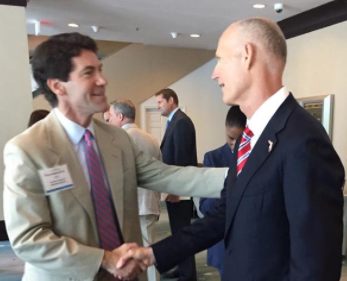 “There are not a lot of people in the Legislature that stood up for us and talked vocally about their support of Enterprise Florida and Visit Florida,” Scott said, “and Jay Fant was one of the few, and I want to thank Jay for doing that and I wish all luck in your next endeavor.”

Is that an endorsement — or anything close to it — though?

In Jacksonville Wednesday, Gov. Scott stopped short of an endorsement of Fant for Attorney General, though he had nothing but positive things to say about the State Representative … describing Fant as a “leader” in protecting state incentive programs that were imperiled.

“I have not endorsed any candidate in the Attorney General’s race,” Scott said.

“My experience with Jay Fant was very positive,” Scott noted, describing a “very tough legislative session in which we made sure we got funding for Enterprise Florida and Visit Florida.”

“He was a leader to try to make sure that happened, so I appreciate all his hard work in Tallahassee, and I know he’s done a lot of good things right here in Jacksonville. But I have not endorsed in that race,” Scott said.

When asked if he was going to endorse, Scott changed the tense.

“I have not endorsed in that race,” Scott repeated.

For Fant, who is attempting to position himself as the “business-friendly” candidate in the Attorney General’s race, Scott’s praise has to seen as encouragement to stay in that lane.