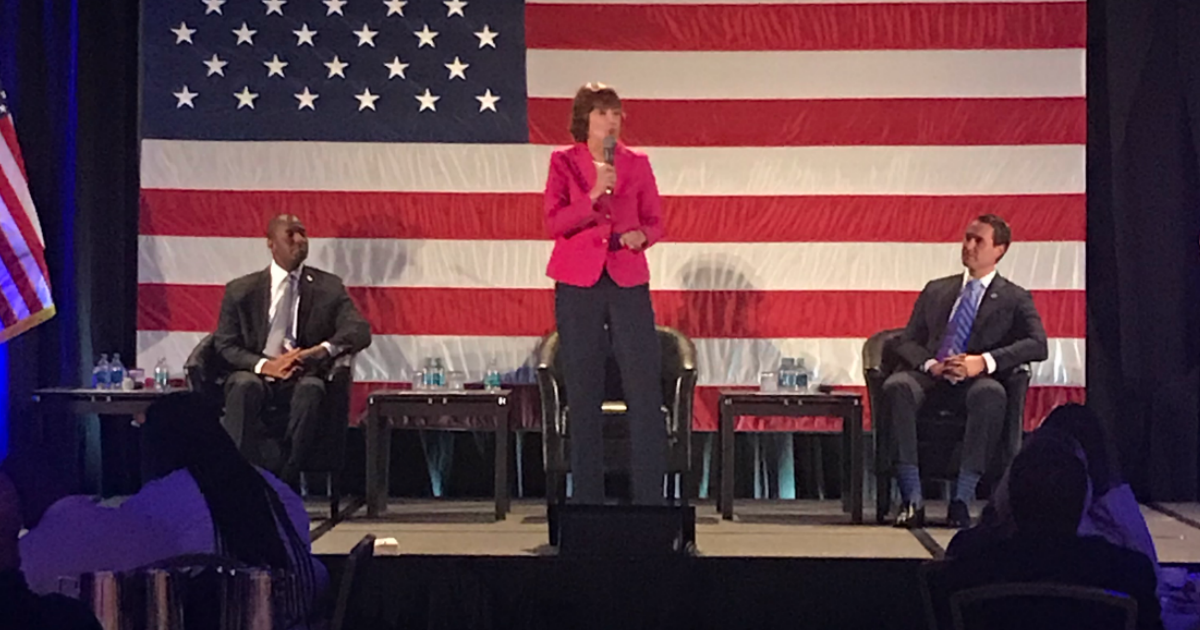 Great theater it was not.

Buoyed by a win in a special election for a state Senate seat last month, Florida Democrats are preparing plans for the critical 2018 election year when they hope to reclaim the governor’s mansion.

The three Democrats aiming to do that did reveal some differences, particularly about their backgrounds, even as they sounded similar on most policy questions.

Take the issue of immigration, for example.

King said he would do everything in his power to help the tens of thousands of undocumented immigrants in the Deferred Action for Childhood Arrivals (DACA) program stay in the country.

“When we hear our governor and our president decry immigrants, refer to them as illegals, a person can’t be an illegal, but they use that terminology to strip away the humanity of our brothers and sisters,” Gillum said.

“I’m the one person here who has voted to keep Dreamers,” Graham boasted.

Such comity will not exist when debating immigration against, say, Adam Putnam.

Hundreds of Democrats watched Gillum, Graham, and King share a disdain for Republican rule, fleshing out programs and policies that they would implement if elected.

Right before the forum, Gillum proposed a series of six more debates (not just forums) between all the candidates before the primaries next August. Next week the field is expected to grow by one when Miami Beach Mayor Philip Levine joins the fray, as anticipated.

Orlando attorney and entrepreneur John Morgan created a buzz among delegates when he entered the lobby a half-hour before the debate began. Several Democrats greeted him enthusiastically as he ordered a drink.

So back to the three candidates on the stage.

When it came to combating climate change and ripping into the climate deniers in Tallahassee and Washington D.C., the trio sang from the same song sheet.

“We need a governor who believes in science,” said Gillum.

King was effusive about climate change, saying sea level rise presents a “tremendous opportunity for Florida.” He compared the issue to John F. Kennedy’s moonshot, who declared after becoming president that the nation would put a man on the moon.

Finding a way to reduce sea level rise could bring out the best minds from around the country, King said, allowing Florida to become a “research mecca.”

Onstage, Graham exuded warmth and sweetness, telling the 550 people who paid more $250 for a seat at the dinner (with an auxiliary room televising the debate to another 250 or so) that she had a message for the GOP candidates — she’s a hugger.

“But in a second, just like that, it can turn into a headlock — just ask Steve Southerland,” she said, referring to the Republican she vanquished in her only bid for Congress in 2014.

As for King, he distinguished himself by emphasizing affordable housing, which makes sense since that’s what he does for a living.

When asked about the most significant health care issue in the state, Gillium wasn’t specific, only to blame Florida Republicans: “The biggest threat to health care in this state is Gov. Rick Scott and the Legislature.”

Gillum also spoke of their refusal to expand Medicaid as part of the Affordable Care Act.

Graham again called for a public option. Interestingly, she said she would push for that on a state level, saying that she couldn’t wait for Congress to make that change in Washington.

King said he hadn’t given up on the idea that Florida might still expand Medicaid.

One proposal King staked out on his own was a plan for free tuition for community college and trade school education.

Some people expressed concerned that Democrats couldn’t keep up with the Republicans in fundraising — especially a year out from the race; it was a fact spotlighted last week by the Orlando Sentinel.

But, earlier in the day, Jeremy Ring knocked down that notion.

Ring, the only Democrat currently in the CFO race, said that with exceptions of the usual corporations, nobody is really paying attention to the race so far out.

“These articles appear to speak to about six people,” Ring said … perhaps (slightly) underestimating the appetite among political junkies.

“Let’s go to a Miami Dolphins or a Tampa Bay Bucs [game] and ask anyone in the stands whether they read any of these articles. It’s not real.”

Kevin Griffith, vice chair of the Sarasota County Democratic Executive Committee, said: “There’s uncertainty about who is at the head of the pack right now, but we’re at a point where we want new ideas and new blood.”

Earlier in the afternoon, party delegates voted — 860-13 — on 15 policy resolutions, an almost unanimous vote that had Democrats congratulating themselves for expressing near harmony.

Among those votes included a gun-control measure: “The Florida Democratic Party supports policies that regulate semiautomatics and accessories, including but not limited to, all semi-automatic weapons; armor- piercing ammunition; high capacity magazines or clips that can hold more than 10 bullets at a time; and bump stocks or any accessory that simulates the ability of a fully automatic weapon.”

There was an environmental resolution that also thrilled Alan Newell, chair of the Democratic Environmental Caucus.

“I look at the kind of things that have been done environmentally against the people’s interest in the state of Florida for the last seven or eight years … The DEP has been decimated, we can’t mention the words climate change, it’s against the law in Tallahassee, and I think that’s just awful and that shouldn’t people what the peel in the state of Florida should be paying for.”

nextDavid Richardson to dine with 'Dreamers'