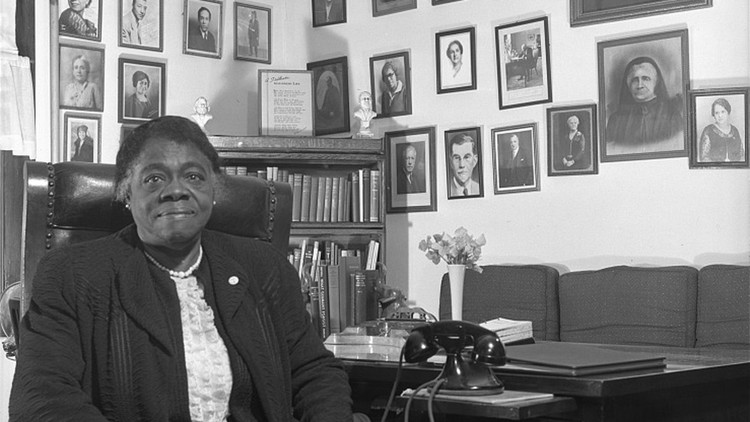 A likeness of educator and civil-rights activist Mary McLeod Bethune is one step closer to replacing a statue of a Confederate general as one of Florida’s two representatives in the U.S. Capitol.

On Wednesday, the Senate Appropriations Committee cleared a bill (SB 472) to replace the statue of Gen. Edmund Kirby Smith with Bethune, who lived 1875-1955. Only Sen. Dennis Baxley, an Ocala Republican, voted in opposition.

Each state has two statues on display in the Capitol’s National Statuary Hall. Florida’s other statue, a marble rendering of scientist-inventor Dr. John Gorrie of Apalachicola, a pivotal figure in the invention of air conditioning, will remain.

The move to replace Smith’s statue came after a renewed debate in recent years about Confederate symbols, including the battle flag ubiquitous in the South.

In 2016, lawmakers in 2016 agreed to remove Smith’s statue but didn’t settle on a replacement.

Bethune was the founder of Bethune-Cookman University and the first African-American woman to lead a federal agency, serving as director of the Division of Negro Affairs during President Franklin Roosevelt’s tenure.

She was born to former slaves in South Carolina in 1875 and was the only candidate to receive the unanimous support of the state’s Great Floridians Committee who gathered to choose a replacement for Smith.

The vote to replace Smith came months after the shooting deaths of nine black worshippers at a historic black church in Charleston, South Carolina. After those killings, photos emerged showing the Charleston shooter, Dylann Roof, posing with the Confederate battle flag in the months leading up to the killings.

That photo was “Photoshopped,” claimed H.K. Edgerton, a black member of the Sons of Confederate Veterans and the former president of the NAACP chapter in Asheville, North Carolina, who opposed the proposal.

“This body should not be talking about taking down the statue of General Smith, it should be educating the masses about his glorious and wonderful life,” shouted Edgerton.

That prompted Committee Chairman Rob Bradley to inform the general public that the debate about whether to maintain the state of Smith in the Statutory Hall was decided last year, and the issue of the day was whether a statue of Mary McLeod Bethune was worthy of representing the state of Florida.

Despite that admonition, several speakers who followed spent their time before the committee lamenting that 2016 decision.

“You need to reconsider what you’re doing,” said Jacksonville resident Henry Russ, member of the Sons of Confederate Veterans. “No decisions are ever in concrete as we’re fast finding out, because they’re tearing down things that have been up for more than 100 years.”

In fact, the Hillsborough County Commissioners voted earlier this year voted to remove a Confederate statue that had stood in front of a county courthouse since 1911.

“At [a] minimum, the process needs a do-over,” complained David McCallister from Save Southern Heritage Florida, which led the opposition to remove the Confederate monument in Hillsborough County. He argued that removing a military official like Smith should be replaced with another member of the military.

But it wasn’t only members of the public who wanted to re-litigate the 2016 legislative vote on removing Smith from Statutory Hall. Ocala Republican Dennis Baxley called the removal of Smith’s statue as a form of “cultural purging.”

“I do hope that we would rethink this idea of purging what we don’t like and we don’t think represents everything about us, of our history, and instead say, ‘how do we build and honor each other more?'”

The National Statuary Hall allows each state to be represented by the likenesses of two people. Along with Smith, Florida has long been represented by John Gorrie, widely considered the father of air conditioning.

Lakeland Republican Kelli Stargel said she supported Thurston’s proposal, but also opposed removing Gen. Smith and said her first choice to replace him in Washington would have been Jenkins.

“The state of Florida has an opportunity to communicate that in Florida we value women, we value innovators, we value visionaries, we value diversity, we value individuals, like Dr. Mary McLeod Bethune who will join Rose Parks as one of the African-American females in Statuary Hall,” said Orlando Democratic Senator Geraldine Thompson.

The bill is being sponsored in the House by Daytona Beach Democrat Patrick Henry (HB 139).

previousJoe Henderson: Teachers deserve raise, but where is the money?