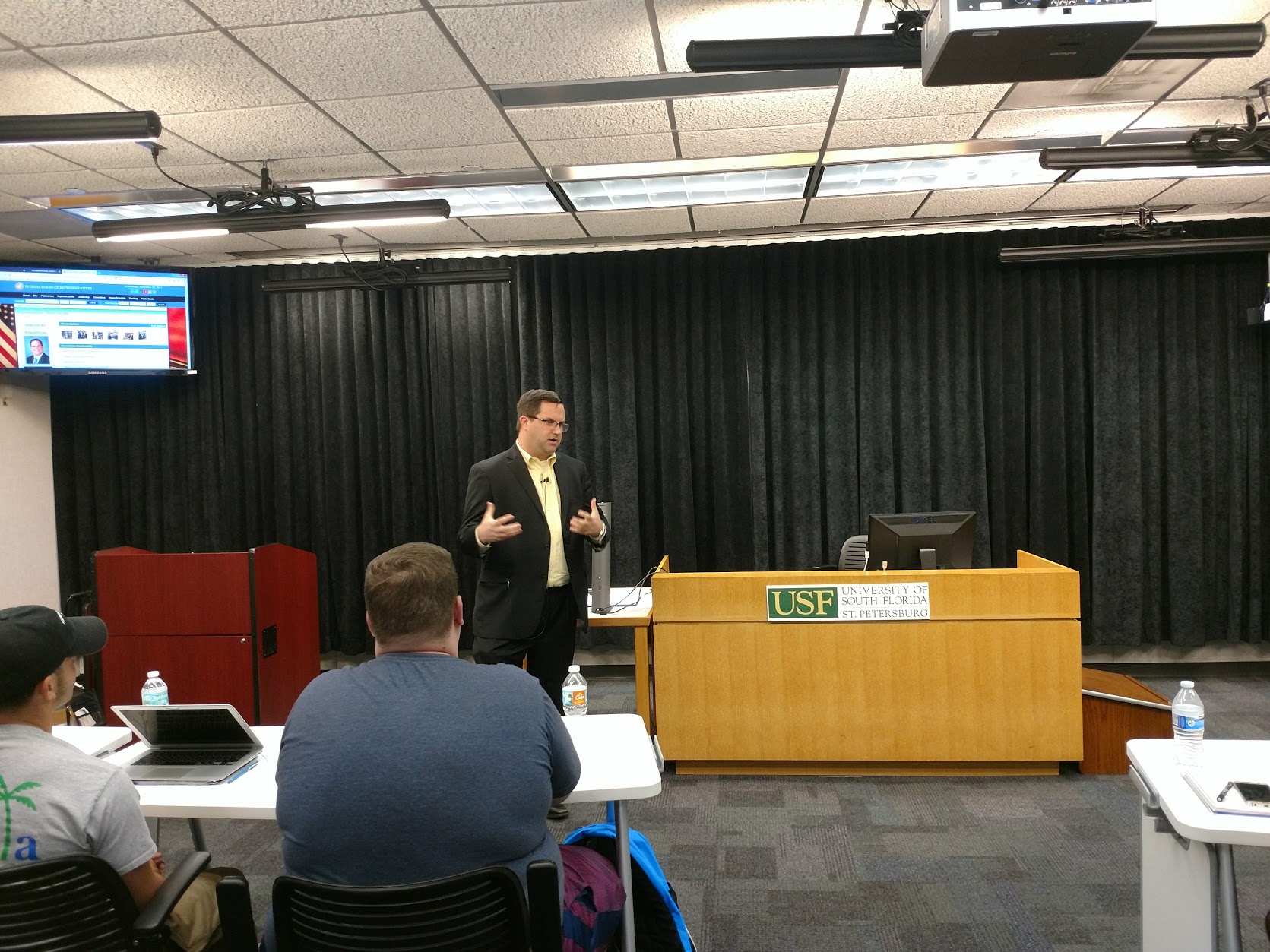 Like his father, state Rep. Chris Latvala of Clearwater is a proud Republican who doesn’t always toe the GOP line – a contrarian streak which sometimes gets him into trouble.

Not that Latvala, son of longtime state Sen. Jack Latvala, is that worried about that perception.

“My grade with the NRA is a ‘D.’ And I’m proud of that,” the second-term lawmaker told students attending an American National Government class at the University of South Florida’s St. Petersburg campus Wednesday afternoon.

Noticing a reporter was observing the appearance, Latvala held his tongue on his true feelings on venerable NRA lobbyist Marion Hammer.

Hammer “does not like me very much,” he simply said.

Latvala opposed the gun rights organization’s push during recent legislative sessions to repeal a state law that bars people from openly carrying firearms in public (coincidentally, the U.S. Supreme Court ruled earlier this week that it would not hear a legal challenge to the ban).

The 35-year-old Latvala is serving his second term representing Clearwater and Largo residents in House District 67, which he first won in 2014 by defeating Democrat Steve Sarnoff.

He told the students he aspired to become a sportscaster while still in high school, but in his senior year was discouraged by a teacher. That resulted in him getting into politics, beginning with the presidential recount year of 2000.

Latvala attended the University of Central Florida where he became involved in some Young Republican activities, and then in 2006 was asked by newly elected House Republican Ed Hooper to become his legislative aide, a job he fulfilled until Hooper was forced to step down due to term limits in 2014. That’s when Latvala opted to run for the seat himself at the age of 32.

Latvala told the class that he is also a champion for the LGBTQ community, referring to the fact that he has co-sponsored the Competitive Workforce Act for the past three years. That bill would prohibit anyone from being discriminated against at work, in housing or in public places like restaurants because of their sexual orientation or gender identity.

And he admits he’s still learning about those issues, confessing that when he first met with officials from Equality Florida, he wasn’t sure of everyone’s gender.

He also said he differed from the majority of his Republican colleagues when it comes to the environment, specifically his opposition to fracking and offshore oil drilling.

But liberals are no fans of Latvala’s support for the “Schools of Hope” provision in the controversial education bill passed earlier this year. HB 7069 accelerates the timetable for school districts to turn around schools that continue to struggle academically.

Latvala said charter schools that would take over failing public schools would have to show they’ve been successful in areas of poverty throughout the country.

The suit also contends that the law creates a separate parallel system of schools which might violate the constitutional guarantee of “a uniform, efficient, safe, secure and high-quality system of free public schools.”

Latvala encouraged the students to follow lawmakers they support, and if possible, inquire about getting an internship. One student was disappointed after asking if he or other state legislators offered paid internships (they don’t), but Latvala did note how Janine Kiray, his district secretary, started out as an intern before ultimately hired to work with Latvala after his election.

None of the students asked about his father, state Sen. Jack Latvala, whose campaign for governor has been stopped in its tracks after revelations earlier this month that six women had accused him of sexual harassment.

One of those women, Rachel Perrin Rogers, went public Wednesday as one of his accusers.

In the immediate aftermath of the story, an attorney representing Perrin Rogers claimed Chris Latvala was not acting in the public interest.

Tallahassee attorney Tiffany R. Cruz wrote a letter to House Speaker Richard Corcoran to complain about comments made by Latvala and Rep. Kathleen Peters. Chris responded that he had no idea what Cruz was referring to, saying when it came to this story, he was making an effort to stay off social media.

Chris Latvala did tweet to Agriculture Commissioner Adam Putnam immediately after the story broke, saying the accusations against his father “are not true.”