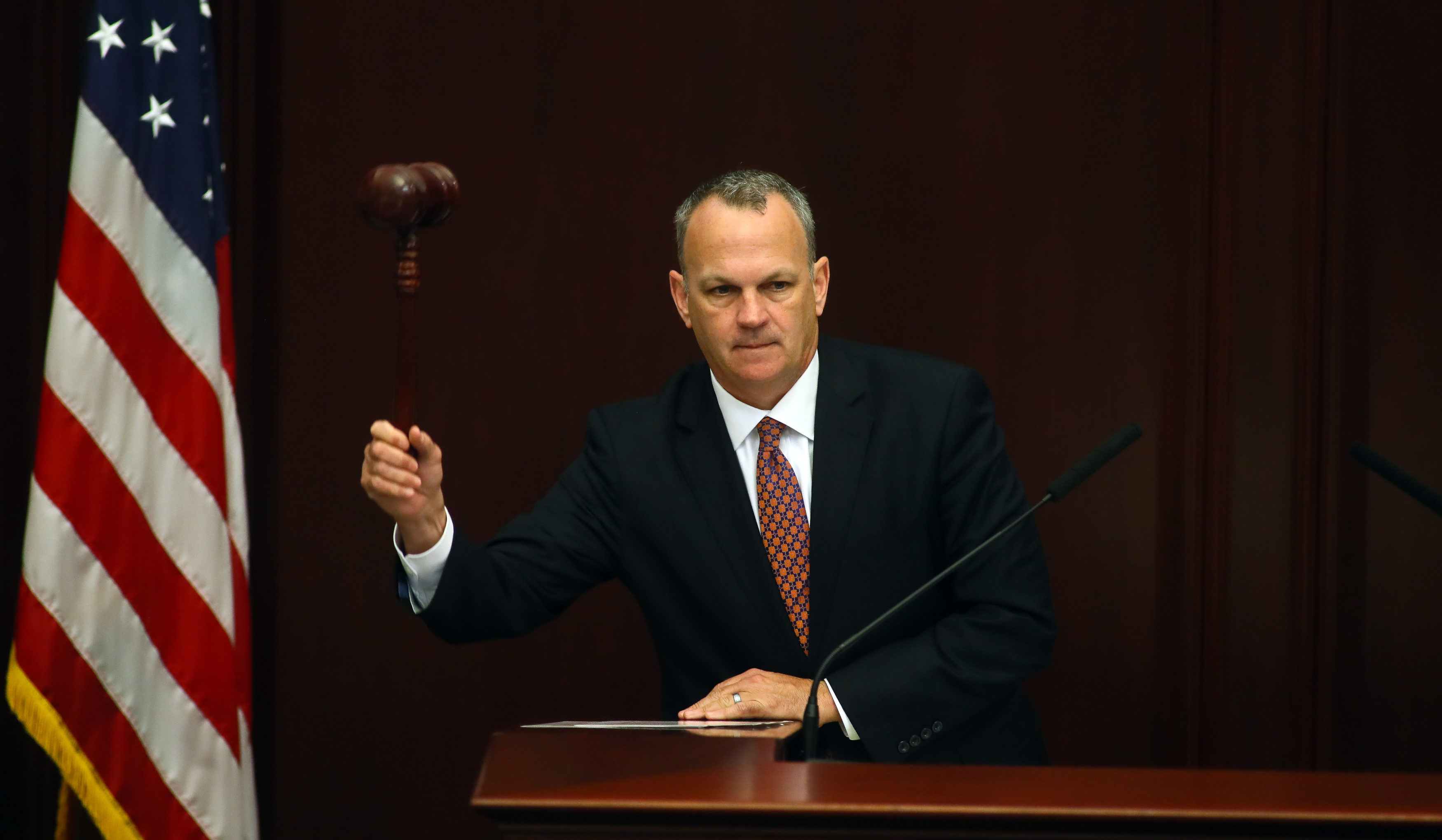 Richard Corcoran apologized as he slid into his seat on the outdoor patio at The Capital Grille, an upscale eatery at Tampa’s swank International Mall. He was running a little late and battling a head cold.

Corcoran passed on his usual glass of red wine. Instead, he opted for chilled Fiji bottled water.

Our waiter smiled, welcomed him back by his name, said it was good to see him again and left to fetch the water. And things were going smoothly as I threw out questions to the Florida House Speaker and — he didn’t know this at the time — Florida Politics 2017 Politician Of The Year.

Corcoran, a Republican from Land O’Lakes, discussed policies he will pursue when his second and final term as Speaker begins in January.

And if you didn’t, well, buckle up.

His agenda will include continued battles for tax reform, immigration reform, regulatory reform, and, as always, an emphasis on transforming the way students receive their education.

“Hopefully, it will be the same (as last Session),” he said. “Hopefully it’s just as disruptive and just as transformative.”

We won’t learn whether he plans to formally enter the 2018 race for Governor until after the Session, but if you’re looking for clues, consider this statement: “I do things a little unconventionally, but we’re still raising money” for a possible campaign.

He talked with an obvious love for the values his parents instilled in him. He swapped stories about his friends, including Pasco County Sheriff Chris Nocco. He spoke of his faith, which is deep and central to his being. He said Gov. Rick Scott “has done a great job.”

“We’re now No. 1 in fiscal health. That’s an amazing stat, to be the third-largest state in the union and No. 1 in fiscal health,” Corcoran said. “If you look at all the other large states — California, New York, Pennsylvania — they’re all at the bottom five. The closest (big state) to us is Texas, and they’re like No. 27 or 26.

“For us to be No. 1 in fiscal health says something. That’s a focus on creating an atmosphere that the small businesses can go out there and create jobs. It’s about deregulation, tax cuts, and getting out of their way.”

But about 25 minutes into a 40-minute give-and-take, I asked if he wishes he could take back the widely referenced remark that the Florida public school teachers union is evil.

I think he had been waiting for that one. He sat straight up in his chair, his voice rising, arms waving; even through a raspy, congestion-clogged voice, you could tell the question touched a nerve.

“I didn’t say that,” he said, eyes narrowing. “Go back and listen to the tape.”

I did go back and listen, and it’s true. Corcoran did not call the union evil, although a quick Google search reveals a string of stories with headlines saying he did.

Corcoran’s statement then was that the union’s lawsuit to stop his ambitious plan to expand Florida’s education voucher program for low-performing schools was “evil.” If successful, he believed the suit would keep primarily low-income, minority students trapped in an education system that was failing them.

He didn’t back off then. He isn’t backing off now.

“What Richard Corcoran said, for the whole world to hear, in a very public setting, was that a lawsuit that takes the most underprivileged, underserved children and takes them out of a failing school and puts them into a school that gives them a 40 percent greater chance of going to college, and you file a lawsuit to end that program, that is evil.”

That exchange captures the essence of Richard Corcoran, as explained by people who know him best.

He is master of details, fiery and unapologetic when he believes he is right, and on a mission to turn the status quo into rubble.

Away from the office, he loves Florida Gators basketball and Tampa Bay Buccaneers football. He is all about family. He is a loyal friend and a relentless foe, but if you have earned his respect, he can easily separate the personal side from professional.

As House Minority Leader, Cruz is a liberal Democrat and was outspoken at her belief that Corcoran’s education overhaul — his cherished House Bill 7069 that passed last spring — was an unwarranted attack on public schools.

But even though she said then she was “shocked” at Corcoran’s remarks, the two get along well.

“Janet is a great person. We’ve sat right there and smoked cigars together,” Corcoran said, pointing to an outdoor spot.

“The Speaker and I have always had a good relationship that I believe we were able to build over our shared love and dedication for our families. Although we rarely agree on policy, his door has always been open, and even when we argue, I know that there will never be any hard feelings because of the mutual respect we have for one another,” she said.

“Richard is genuine in his beliefs, as I am in mine, and I know that when we walk off the floor for the last time after this session, we will depart as we arrived — as friends.”

This is the Richard Corcoran his supporters expected to get when he was elected to the Florida House in 2010 after two previous campaigns for a seat ended in defeat.

“I had more doubt that Richard would get elected to the Legislature than that he would take over a leadership position there,” said close friend Paul Hawkes, who has served as both a state representative and chief judge of the state’s 1st District Court of Appeal.

“Gov. (Jeb) Bush used to say that some guys run to be, and so guys run to do. To be a doer means you upset people. You can never change the status quo without upsetting some people. I always thought Richard would want to run and would run.”

Go back to the words he used to forecast his plans for 2018: disruptive and transformative. They are central to everything about his idea of governing.

“If you have an idea you want to get in front of Richard and you want him to embrace it, show him how it upsets the status quo,” Nocco said. “If it’s a new way to look at the problem and this is how we can change things, he’ll embrace it wholeheartedly.”

That was the essence of Corcoran’s bare-knuckles fight to win approval for his Schools of Hope program. It provided $140 million, or up to $2,000 per student, for expanded programs at struggling public schools in low-income areas.

It also authorized money for state-approved charter operators to open new schools within 5 miles of those at-risk public schools. Corcoran said the program gives parents the chance to opt out of a failing school, but critics say it is a drain on already-strapped public-school budgets.

It was the most divisive issue in the last Legislative Session as state public-school teachers flooded Tallahassee with protests. Corcoran, whose wife, Anne, helped found and operate the Classical Prep charter school as a volunteer, was resolute that offering alternatives is a better way.

“He is determined. He gets an idea in his head (if you will), and he is determined to fulfill that idea, that dream. That’s extremely impressive. He’s very competitive. He doesn’t like to lose,” said Pasco County Tax Collector Mike Fasano, Corcoran’s neighbor and a former state legislator.

I shared that quote with Corcoran, and he nodded in agreement.

“Truth is objective and noble. If there is an objective and noble truth, you pursue it,” he said. “That’s why a lot of speeches I give are about truth and justice. That’s from Socrates. He’s got tons of good lines. He gave one that said show me who’s teaching your kids and I’ll show you the future.”

Corcoran is all about the future, even if — or maybe especially if — that means turning the present on its ear. Controversy doesn’t scare him, and tough fights don’t intimidate him. Being the Speaker gives him the chance to craft a future for Florida he believes will be better than what was here before.

To get there, he will bloody your nose if need be. He knows how to work a room or twist an arm. He knows what he wants and will try to win over opponents with a righteous, confident argument. If that doesn’t work, he knows how the system works and what it takes to win.

No hard feelings, though. When the battle is over, sit down. Have a cigar. Have a glass of wine.

It’s not personal. It’s about a vision, and Richard Corcoran is confident that he has the right one for Florida.

nextPoliticians ringing in the new year with last-minute fundraising appeals