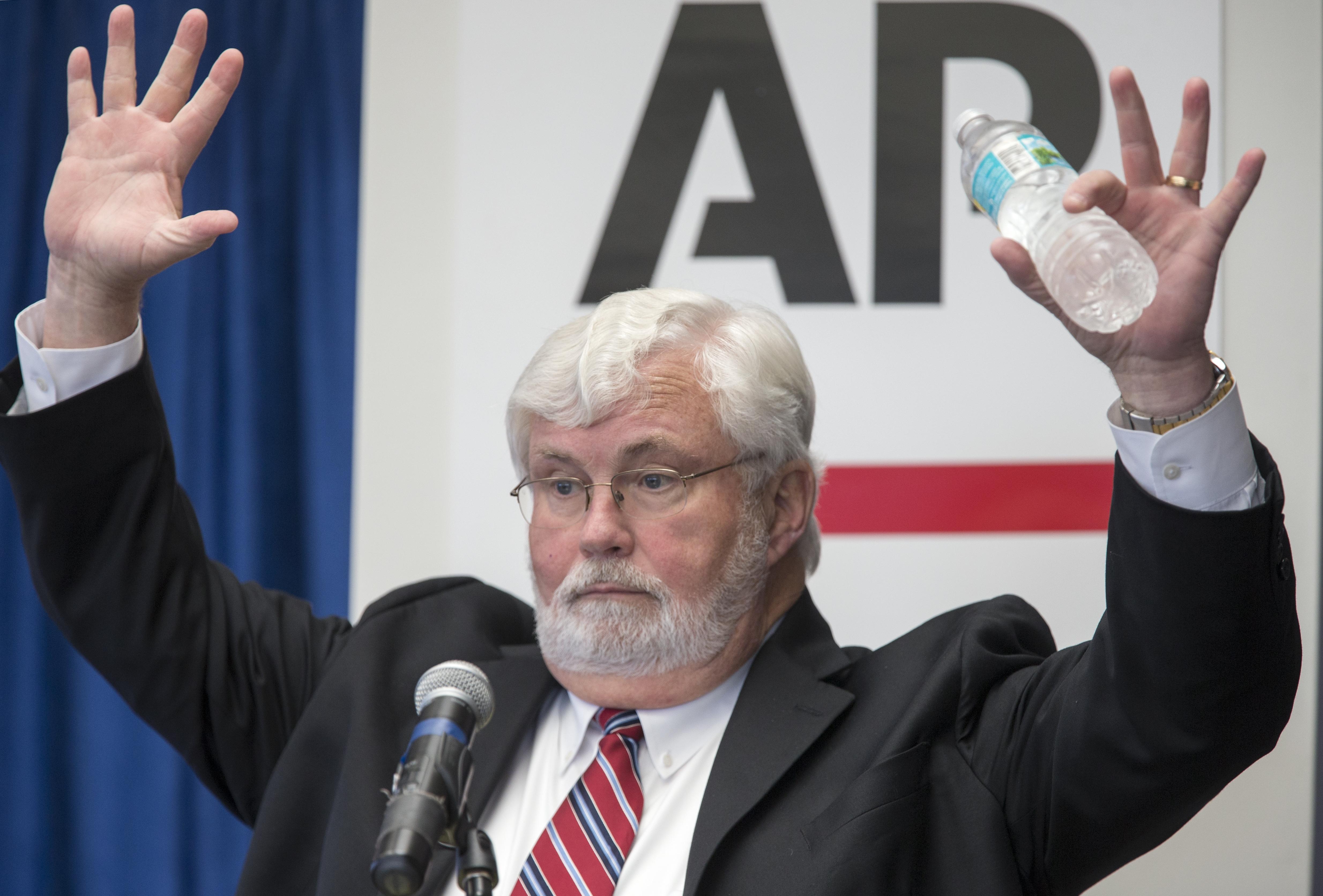 No criminal charges for Jack Latvala.

In the face of two damning reports this week on his alleged serial sexual harassment, state Sen. Jack Latvala on Wednesday resigned from elected office.

The 66-year-old Clearwater Republican said in a statement to Florida Politics he “never intentionally dishonored my family, my constituents or the Florida Senate.”

He added that his “political adversaries have latched onto this effort to rid our country of sexual harassment to try to rid the Florida Senate of me.”

Latvala admitted, however, that he “ … perhaps (had not) kept up with political correctness in my comments as well as I should have.”

The special master’s report, which was made public Tuesday afternoon, found Latvala “on multiple occasions” offered to trade his vote for sex with a female lobbyist, according to a report released Tuesday by the Senate, which recommends the sexual harassment allegations against the veteran lawmaker be investigated by criminal prosecutors. The bombshell finding came toward the end of Special Master Ronald V. Swanson‘s report into a complaint filed by Rachel Perrin Rogers, a top legislative aide for future Senate President Sen. Wilton Simpson, in which she accused Latvala of sexually harassing her and assaulting her.

A second investigation into sexual harassment claims against Latvala, prompted by a POLITICO Florida story, has turned up a witness who bolsters an allegation that the senator would offer to trade sex for favorable votes on legislation.

This story is developing.

“Senator Latvala made the right decision. At all times during this investigation, the Senate has afforded all parties the full and fair opportunity to be heard. The Florida Senate has zero tolerance for sexual harassment or misconduct of any kind against any employee or visitor. The allegations in this complaint, and the resulting Special Master’s Report, describe behavior that violates the public trust.

“In the Florida Senate, we are fortunate to have some of the most qualified and dedicated professional staff I have ever had the pleasure of working with. Many of our professional staff members have served this body for decades and will be here long after our public service comes to an end. There is no place in the Senate for misconduct directed against anyone.

“Actions taken by the Senate since these allegations surfaced conclusively demonstrate that we take any allegation of inappropriate behavior with the utmost seriousness. As Senate President, I am committed to ensuring that we all have a safe workplace to do the people’s business. Moving forward, as public and private entities around the country review their own policies related to sexual and workplace harassment, the Senate is also participating in this important dialogue. Led by Chair Benacquisto, the Senate is working to update its administrative policy on sexual and workplace harassment to make it even more abundantly clear to everyone that they can, and should, report harassment to anyone with whom they feel comfortable.

“Just as we have done in this matter, any allegation of sexual harassment or misconduct of any kind will be promptly and thoroughly investigated. We will continue to do everything we can to ensure that all parties have due process, a fair investigation, and appropriate remedies.”

The text of Latvala’s resignation letter:

Our country has been caught up in a movement to shine a spotlight on behavior that dishonors women. Even though I have spent my entire career helping women advance in public service, such as the 14 current female judges in the Sixth Circuit whose campaigns I ran, my political adversaries have latched onto this effort to rid our country of sexual harassment to try to rid the Florida Senate of me. As a husband, father, and grandfather of women, I have been steadfast in my efforts to promote them professionally, but perhaps I haven’t kept up with political correctness in my comments as well as I should have.

I have maintained that the charges in the original complaint our fabrications and say that still today. Unfortunately, except in the one instance where there were third-party witnesses, the Special Master took the word of the accuser over mine on every count. He also went outside the realm of the original complaint and unknown to me introduced an entirely new issue into the process that I had no ability to challenge or rebut.

That was followed this morning by supposed leaders in the Republican party calling for me to resign. All of this occurs today even though we still have anonymous accusers with no opportunity for me to have the privilege our U.S. Constitution affords to confront our accusers in cross-examination.

But, I have had enough. If this is the process our Party and Senate leadership desires, then I have no interest in continuing to serve with you. I, therefore, will resign my seat in the Florida Senate at midnight, January 5, 2018.

I regret that my district will not be represented during the Session, but the timing has not been mine. I feel that if I avail myself of the constitutional protections that all Americans believe we have, the Session will end up accomplishing nothing else for all other Floridians.

May God bless us all! 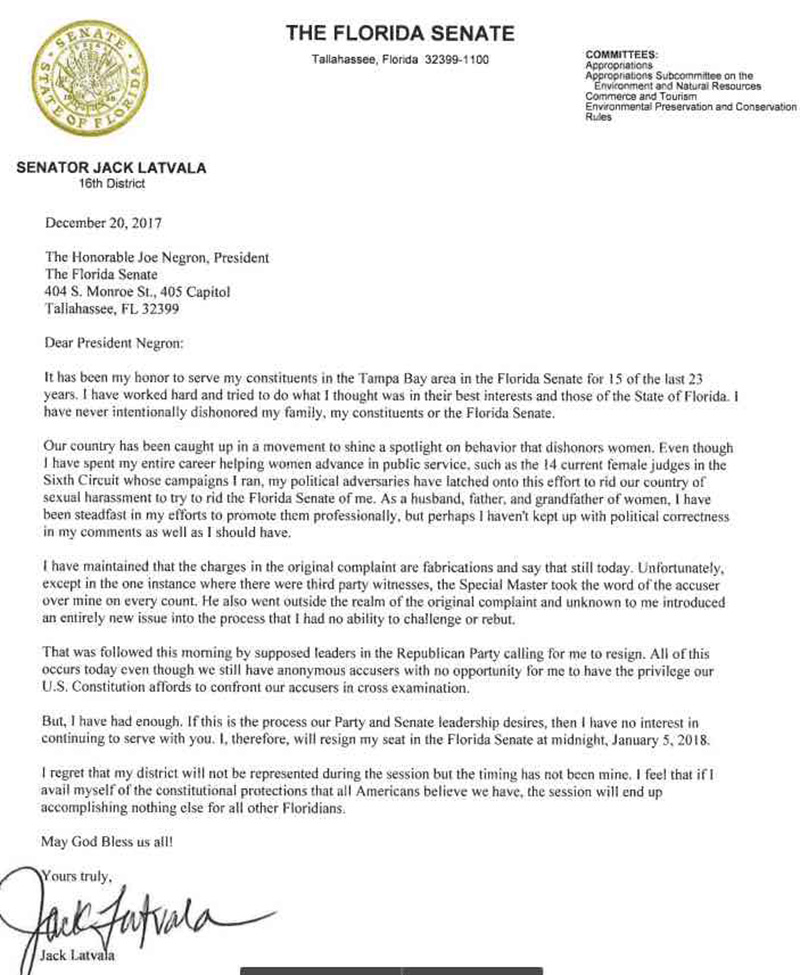