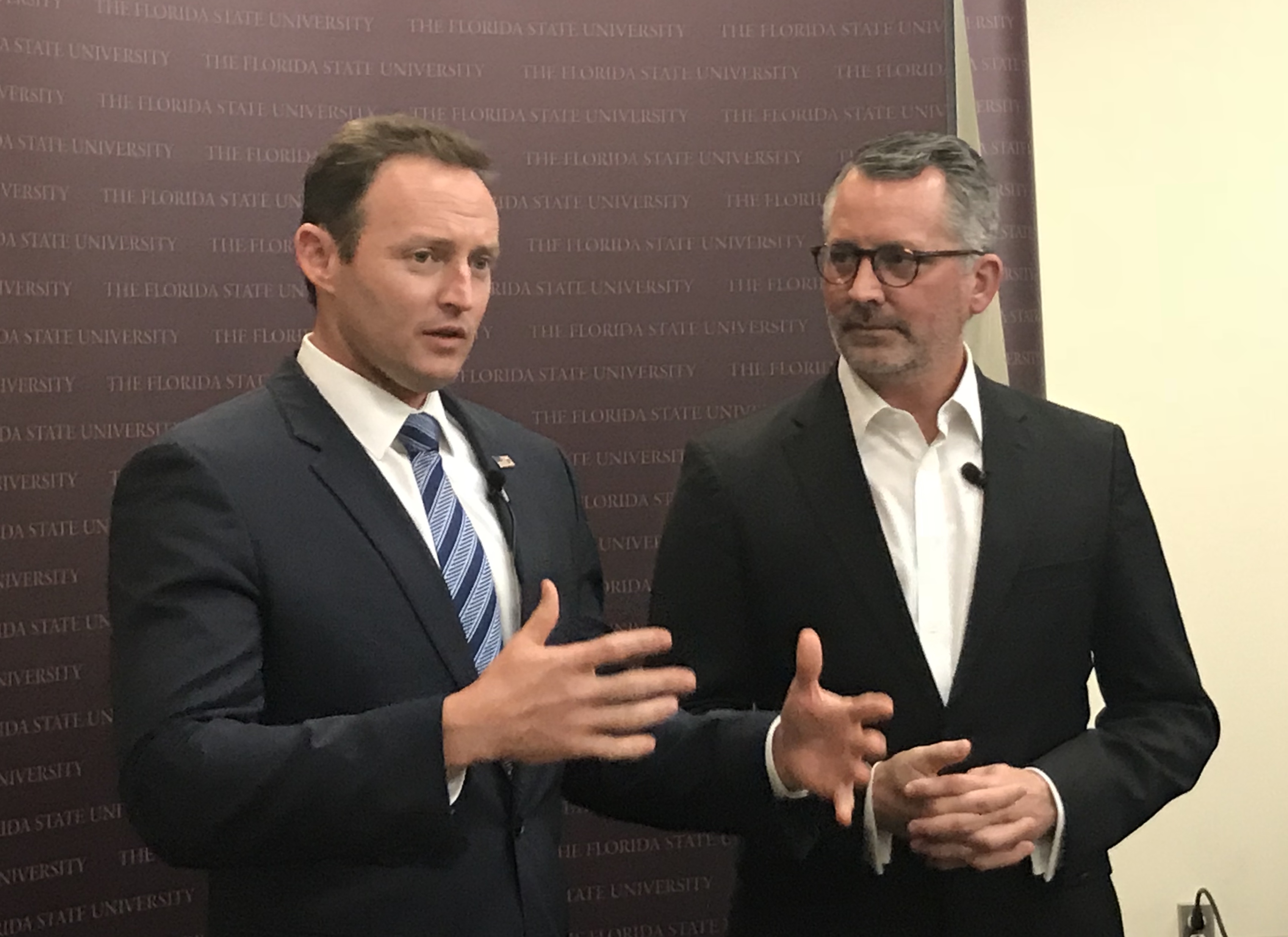 David Jolly, a Republican, and Patrick Murphy, a Democrat, left office in 2017. They’ve since embarked on a tour, titled “Why Gridlock Rules Washington,” to share their less-than-ideal experiences in the nation’s capital.

And the duo doesn’t hold back. According to shared accounts from both Jolly and Murphy, their time in Congress was marred by partisan politics and an inability to get lawmakers to cooperate.

Jolly told listeners at a tour stop Tuesday night at Florida State University that he arrived in Washington with a plan to tackle problems — only to be encountered with a “reality” where bipartisanship, cooperation and compromise were seen as pitfalls for incumbents seeking reelection.

Like Jolly, Murphy said he came to Congress thinking he was going to “change the world.”

He shared a quick anecdote that proved to him otherwise.

Murphy said an early initiative of his to eliminate several special projects in the budget didn’t get the bipartisan support that was promised. The would-be Republican sponsor’s reelection would’ve been negatively targeted by leadership who did not want to see bipartisan success in the chamber, Murphy said.

The talk went on with the lawmakers outlining the problems they believe are directly linked to, even responsible for, gridlock in D.C. Those problems include gerrymandering, closed primaries, an overemphasis on campaign finance and the mainstream media habit of rewarding polarizing politicians with airtime.

Jolly and Murphy outlined potential fixes for the issues, too. Nearly all involved far-reaching changes that would alter the status quo — but the two hinted that their proposed solutions are more practical given the current national political climate.

And they might be right. Jolly said the turnout on the college circuit has been great — especially given the subject material being discussed.

At least one of the solutions discussed by Jolly and Murphy had some steam in the state earlier this year.

The Constitution Revision Commission was considering a proposal that would’ve opened the state’s primaries to all voters. It was later amended to provide for advancing the top two candidates, regardless of their party affiliations, to the general ballot.

However, a committee within the CRC killed the proposal unanimously earlier this month. Currently, voters can only vote for primary candidates within their respective registered parties.

Jolly spoke in depth about opening the state’s primary election system. He said he “journeyed politically” to his stance now.

In an interview with Florida Politics, Jolly and Murphy also discussed their time together in Congress. Jolly said he’d work on bills with Murphy, but that collaboration often was stifled by party leadership.

Jolly said the lack of a DACA fix in Washington is a “good example” of how structural issues dominate policy in Congress. He said moderate lawmakers on both sides of the aisle cannot afford compromise on the issue if they intend to be reelected.

“The problem is if the two parties actually compromised on [DACA], at least in years past, they would all be primaried back home,” Jolly said.

Jolly and Murphy also were asked if they intend to run for office in the near future.

Murphy has said he won’t run for his old seat against incumbent Republican Brian Mast this year.

But on Tuesday Murphy added, “I’d be surprised if either one of us didn’t end up on the ballot at some point.” He said their interest in the state of Florida, as evidenced by the tour, could result in one of them running for office to represent the state again.

As for Jolly, who would for his old seat have to square off against incumbent Charlie Crist, “it’s going to go all the way to the filing deadline.”

nextAshley Moody slams Jay Fant, says his letter shows 'why you are not qualified to be Attorney General'