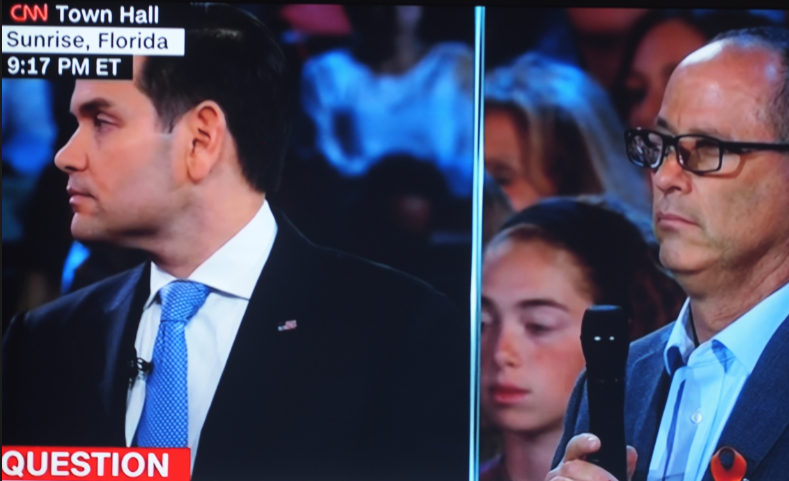 If the crowd at Wednesday night’s gun discussion at the BB&T Center in Sunrise was indicative of more than just a normally Democratic community now suffering from one of the most horrific school massacres in history, then Republicans such as U.S. Sen. Marco Rubio and staunch 2nd Amendment advocates can find little place there.

That left Rubio, who joined Democratic U.S. Sen. Bill Nelson and U.S. Rep. Ted Deutch, often in the spotlight of anger and pleading survivors, family and friends, as he defended 2nd Amendment positions opposing many of the gun restrictions the crowd was professing.

The trio of federal lawmakers found their roles well defined from the start, and found that the questioners, including teenagers, harbored no fear or intimidation whatsoever in pressing powerful members of Congress.

Deutch, the hometown congressman who has been a strong, longtime advocate of gun control, gave fiery calls for banning what he called “weapons of war,” and denouncing opposition to gun reforms. And for those he drew standing ovations.

Nelson, who’s been through all of this before, from previous horrible tragedies, sought to balm and inspire the crowd, declaring, “Your hope gives me hope. You’r determination gives me more determination…. You have been so strong. Keep it up.”

And on the other side was Rubio, who drew flat-out confrontations, and stood up to them with compassion and respect, and expressing sincere empathy and understanding, yet with convictions to positions the questioners and the crowd did not like. He took it.

“I want to like you. Here’s the problem: Your comments this week, and those of our president have been pathetically weak,” Rubio was told by Fred Guttenberg, whose 14-year-old daughter Jaime Guttenberg was killed last week.

“Tell me guns weren’t a factor in the hunting of our kids,” Guttenberg demanded.

At another point, student Michelle Lapidot asked, rhetorically, because she said she wanted to ask someone from the National Rifle Association, but there wasn’t anyone there yet, “Was the blood of my classmates and teachers worth your blood money?”

Rubio made some news pledging some concessions on gun control stands He renewed and strengthened vows to support a ban on bump stocks, an increase the minimum age for the purchase of a rifle to 21, an expansion background checks on gun purchases. Finally, he promised a new breakthrough, to consider restrictions on ammunition magazine sizes, an issue that had been front and center in the gun debate 20 months ago, in the weeks after the Pulse massacre in Orlando, and which Rubio had then strongly opposed.

The last concession was one he said has come to him from what he had learned from law enforcement briefings about what happened inside the high school last week. He said it was evidence in politics that people can change their minds.

“I traditionally have not supported looking at magazine clip size. … I’m reconsidering, and I’ll tell you why,” Rubio said. “While it may not prevent an attack, it may save lives in an attack. I believe there will be evidence that in a key moment in the incident, three or four people, three or four people, might be alive today because of something this deranged killer had to do.”

But Rubio’s other arguments, seeking to explain, for example, how complicated it could be to ban the kinds of guns that killed in Stoneman Douglas High School and in Pulse, fell flat, sounding as if he was nickel-and-diming the issues on technicalities. And he was doing so in front of young people who had stared down a blazing AR-15 just days ago, and in front of grieving parents and siblings.

At one point he asked Deutch if he would be so bold as to support a ban on all assault rifles, as if such was an absurdly-broad ban.

Still, Rubio fared better than Florida Gov. Rick Scott and President Donald Trump. CNN invited both, and they both declined. And they both suffered  numerous unanswered hits during the town hall, for not participating.

Nelson, who likely will be facing Scott later this year in the U.S. Senate race, took several opportunities to criticize the pro-2nd Amendment governor.

“My colleague and I, Marco Rubio, have a good relationship. I told him before I came out tonight he had guts coming here, when in fact there is no representative of the state of Florida here. Our governor did not come here, Gov. Scott, but Marco did,” Nelson offered.

Rubio’s empathy and connection with the crowd was not shared by his successor on the 2nd Amendment side of the issue.

In the second half of the show, CNN brought out Broward County Sheriff Scott Israel and NRA national spokeswoman Dana Loesch.

Loesch started out condescending and lecturing, trying to draw distinctions between selling weapons to people she called “nuts,” and to anyone else. Almost continuously, Loesch tried to blame the school massacre, and redirect questions and arguments, to being being about the madness of charged shooter Nikolas Cruz, and how the justice system, the schools, and society had missed all warning signs that should have signaled the blood to come, and led someone to intervene.

But the students and others, and the crowd reactions sounded as if they heard her argument as offensively irrelevant, as completely tone deaf to what they wanted to discuss: the role of the guns in Cruz’s hands. She was accused of avoiding questions, and Loesch occasionally retreated into the position of the cornered righteous.

That didn’t get by Israel, who told her she had not earned the right to tell the audience, as she had, that she fought for them. He declared there was no reason for the NRA’s opposition to universal background checks and assault weapon restrictions, declaring, “We’re calling BS on that!”

nextSunburn — The morning read of what's hot in Florida politics — 2.22.18