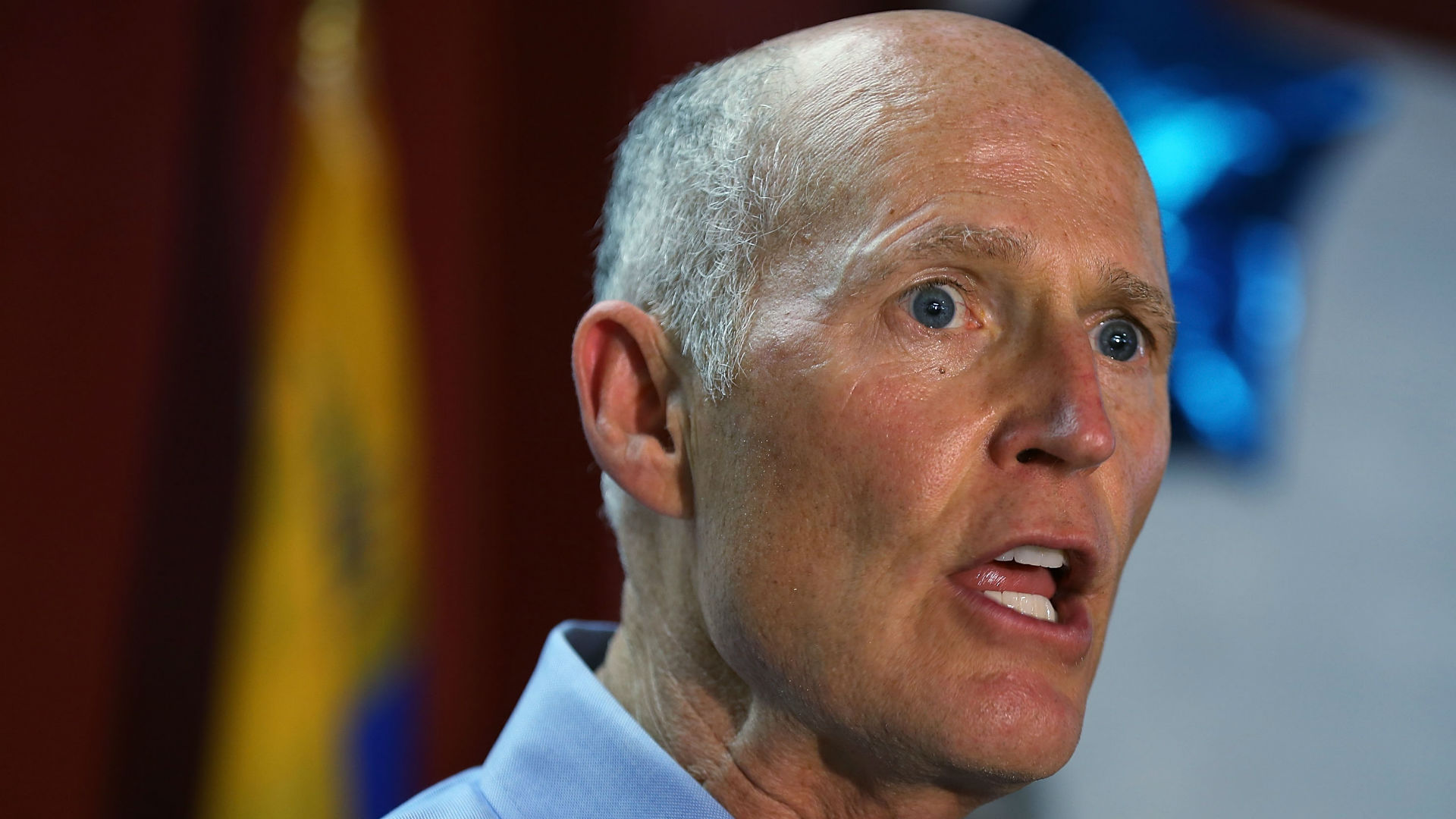 The governor is planning to roll out his legislative proposal Friday that, according to a spokesman, will be “aimed at keeping Florida schools safe and keeping firearms out of the hands of mentally ill people.”

With Florida now at the epicenter of a fast-changing national gun debate, the state’s Republican governor is so far refusing to budge from his long-standing opposition to new limits on firearms.

The approach of Gov. Rick Scott, who holds an A+ rating from the National Rifle Association and is preparing to enter what would be a hotly-contested Senate race, stands in contrast to fellow Republicans such as Florida U.S. Sen. Marco Rubio and President Donald Trump who in recent days have expressed openness to some new gun limits.

In the days since last week’s mass shooting at a South Florida high school re-energized gun-control activists, Scott has so far responded to questions about the issue with answers that quickly turn to mental health and the need for enhancing safety protocols in schools.

Although he initially told CNN last week “everything’s on the table,” Scott declined an invitation from the network to appear at Wednesday night’s town hall with survivors of the shooting at Marjory Stoneman Douglas High School in Parkland.

Rubio attended the event and said for the first time he was ready to consider some restrictions on assault weapons — while Scott’s potential opponent in the fall, U.S. Sen. Bill Nelson, a Democrat, hinted guns could be a focal point in the race by taking a swipe at the governor’s decision to skip.

″[Rubio] had guts, coming here,” Nelson said, prompting boos from the crowd of 7,000 moments later when he added: “Our governor did not come here.”

Scott could face a reckoning on the issue in the coming days, with GOP lawmakers engaged in talks with Democrats designed to produce a potentially modest gun restriction bill before the Legislature’s Session ends next week. The measure would go to Scott for his signature — or possible veto.

The governor is planning to roll out his own legislative proposal Friday that, according to a spokesman, will be “aimed at keeping Florida schools safe and keeping firearms out of the hands of mentally ill people.” The spokesman, John Tupps, said Scott would like to see “swift action,” but he did not specify what that could be.

Scott declined to be interviewed for this story, but several associates this week told The Washington Post he has no intention of softening his views on gun rights.

“He’s committed to Second Amendment rights, and that’s not going to change,” said Brian Ballard, a veteran Florida lobbyist and Scott supporter. “He’s a strong NRA supporter and knows that you have to be careful about tweaking anything that would affect someone’s right to bear arms.”

“He genuinely feels that you don’t solve a symptom of the problem, you solve the problem,” Appell said. “The problem is that schools aren’t safe and is eroding the Second Amendment going to make one kid safer?”

Appell added, “He’s going to be skeptical about the suggestion that banning guns will make school safer.”

Scott, 65, is a wiry and wealthy former health care executive whose anti-establishment entry into politics eight years ago foreshadowed the rise of his ally, Trump.

Known for an upbeat but scripted style, Scott has not shied away from political drama since last week’s tragedy.

He has placed blame on the FBI for failing to act on a call weeks before the shooting, calling for the resignation of the bureau’s director, Christopher Wray.

He has attended numerous funerals, and he has met with survivors of last week’s deadly rampage that killed 17 people and left scores injured. Even in private discussions, he has avoided talk of gun limits.

“He said there is no way that someone who is mentally deranged, such as [Douglas High School shooting suspect] Nikolas Cruz, should have access to a gun,” said Olivia Feller, 16, a junior at the high school who met with Scott on Wednesday along with other students.

One place for consensus could be a revision of Florida’s Baker Act, a law that determines how far law enforcement can go in restricting the activities or purchases of mentally ill people.

Sheriffs and other leaders were divided on whether a change to the scope of the law would infringe on gun rights. Some officials said it should be left alone and urged the state to concentrate on giving weapons to teachers.

Appearing Tuesday at a policy workshop, Scott steered clear of talk of gun rights and focused on “taking a hard look at security” in Florida schools.

“It’s very important we act with a sense of urgency,” Scott said, sitting with a group of sheriffs and state officials.

The deadline for Scott’s final decision on the changes he could support, if any, is fast approaching. State Republican leaders said Tuesday they are planning for a committee vote on their plans next week.

Scott’s enduring position on gun rights reflects the entrenched support for firearms in Florida, despite several of the most deadly mass shootings in U.S. history occurring in the state during his tenure.

Florida has a history of taking the lead nationally in legislating concealed-carry permits, and it has passed a “stand your ground” law, which protects citizens who use deadly force if they feel they are in imminent danger.

Scott’s stance also underscores just how careful most Republican leaders, especially those eyeing higher office, remain on the issue of guns, knowing the party’s base is wary of any push to limit the usage of guns.

Scott has become one of the NRA’s favorite elected officials. The website for the group’s annual meeting this May in Dallas lists him as a speaker earlier in the week, but his smiling photo disappeared from the website by Wednesday. A flier the NRA sent out in 2014 hailed the governor as a trusted foe of “gun control extremists.”

NRA officials made clear this week they intend to fight back against efforts to curb gun rights. The group said in a statement on Wednesday it would oppose legislation to raise the age requirement for buying rifles.

A bill authored by Florida Democrats to ban high-capacity magazines and some semiautomatic weapons failed Tuesday, as gun-control activists and students watched the vote from the state capitol. State GOP leaders said afterward they would consider more modest bills.

The slow pace of debate is a familiar replay for longtime watchers of Florida politics and its governor, although Scott has shown in the past an occasional willingness to move to the center on issues such as Medicaid expansion.

“Florida is littered with examples of people thinking it’ll be a different moment on guns, but the culture never changes,” Florida Republican consultant Rick Wilson said. “This is another one of those moments. That cold political calculus is made, and there is zero movement in Tallahassee.”

Democrats have increased their attacks. “Governor Scott, we need more than your thoughts and prayers. Stop putting the gun lobby ahead of our safety,” a narrator says in the latest ad from Giffords PAC, the political-action committee helmed by former Arizona congresswoman Gabrielle Giffords, a Democrat.

Trump’s allies say presidential action, while at its early stages, could ultimately prod Scott to move further on guns.

“The president’s position goes beyond that, the White House wants stronger background checks,” said Christopher Ruddy, a Trump ally and the Florida-based chief executive of Newsmax Media. “The smart thing to do politically would be to require stronger background checks not only for mentally ill people but for those with criminal backgrounds and other issues. Rick is a strong conservative but he likes to be in line with the president, and Trump is the standard-bearer.”

Florida lawmakers and consultants point back to Scott’s responses to past shootings as the better way to predict his next steps.

“The Second Amendment has never shot anybody. The evil did this,” Scott told reporters two years ago following a shooting in Fort Myers, where two teenagers were killed outside of a nightclub.

“Democracy Dies in Darkness." Republished with permission of The Associated Press.

previousSunburn — The morning read of what’s hot in Florida politics — 2.23.18