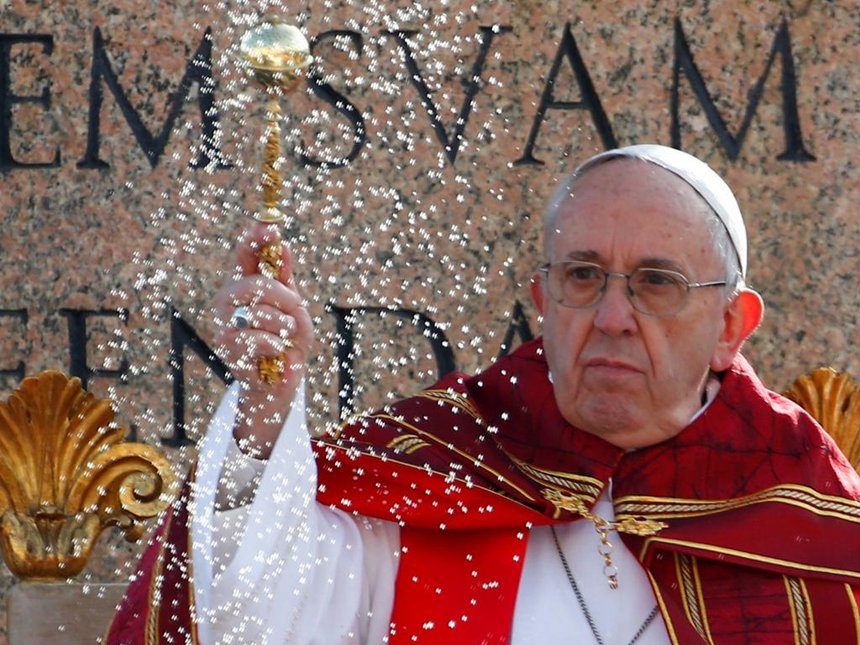 Pope Francis, starting Holy Week services leading to Easter, urged young people on Sunday to keep shouting and not allow the older generations to silence their voices or anesthetize their idealism.

Francis spoke a day after hundreds of thousands of young Americans and their supporters answered a call to action from survivors of last month’s Florida high school massacre and rallied across the United States to demand tighter gun laws.

He did not mention the demonstrations. Catholic News Service (CNS) said Gabriella Zuniga, 16, and her sister Valentina, 15, both students from Stoneman Douglas High School in Florida, where 17 people were killed in February, attended the service with their parents.

CNS posted a photo of the two holding up signs in St. Peter’s Square, with one reading, “Protect Our Children, Not Our Guns.”

The 81-year-old Francis led a long and solemn Palm Sunday service before tens of thousands in the square, many of them young people there for the Catholic Church’s World Day of Youth.

Carrying a woven palm branch known as a “palmurello,” Francis led a procession in front of the largest church in Christendom to commemorate the day the Bible says Jesus rode into Jerusalem and was hailed as a savior, only to be crucified five days later.

Drawing on biblical parallels, Francis urged the young people in the crowd not to let themselves be manipulated.

“The temptation to silence young people has always existed,” Francis said in the homily of a Mass.

“Dear young people, you have it in you to shout,” he told young people, urging them to be like the people who welcomed Jesus with palms rather than those who shouted for his crucifixion only days later.

“It is up to you not to keep quiet. Even if others keep quiet, if we older people and leaders, some corrupt, keep quiet, if the whole world keeps quiet and loses its joy, I ask you: Will you cry out?”

The young people in the crowd shouted, “Yes!”

While Francis did not mention Saturday’s marches in the United States, he has often condemned weapons manufacturing and mass shootings.

Palm Sunday marked the start of a hectic week of activities for the pope.

On Holy Thursday he is due to preside at two services, including one in which he will wash the feet of 12 inmates in a Rome jail to commemorate Jesus’ gesture of humility toward his apostles the night before he died.

On Good Friday, he is due to lead a Via Crucis (Way of the Cross) procession at Rome’s Colosseum. On Saturday night he leads an Easter vigil service and on Easter Sunday he delivers his twice-yearly “Urbi et Orbi” (to the city and the world) message.

previousMarch for Our Lives: 'Welcome to the revolution'