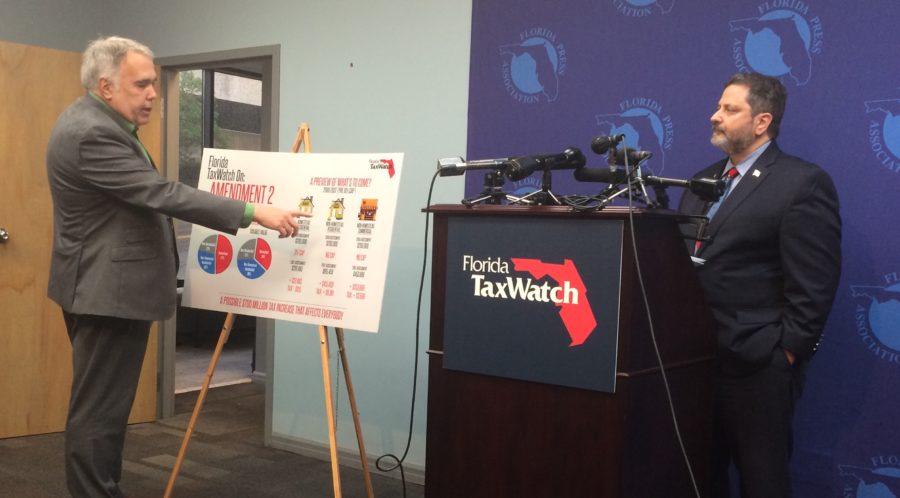 “If you don’t vote ‘yes,’ either you or your neighbors will see massive tax increases and great deal of property tax dissatisfaction … anger even, if we see property taxes jump by 20 percent,” he said Tuesday, at a press conference in Tallahassee.

The proposed constitutional amendment by the Legislature would cap property tax hikes at 10 percent on properties that don’t have a homestead exemption, such as vacation homes, apartment complexes and undeveloped lots.

“If approved, the amendment removes the scheduled repeal of such provisions in 2019 and shall take effect Jan. 1, 2019,” according to the ballot summary. Voters passed a non-homestead 10 percent tax cap in 2008.

“Failure to make permanent the non-homestead exemption cap could result in Floridians paying as much as $700 million more in property taxes annually,” the organization said in a follow-up press release.

When asked whether that would mean $700 million less in tax revenue for government services, TaxWatch vice president of research Kurt Wenner said a vote for the amendment just means keeping current law intact.

“This is what’s happening now, so it’s not a question of taking money away from government,” he said.

Not passing the amendment “would take money out of the economy,” Calabro added, saying property owners would have less spending power.

“It allows business owners to plan for the future by having a better grasp on their budgets, so they can expand and create more jobs,” said Carrie O’Rourke, vice president of public policy for the REALTORS, in a statement. “It helps renters continue to afford their housing as they save to one day purchase a home.”

TaxWatch’s report on the amendment’s impact is here. It’s one of 13 proposals voters will decide in the Nov. 6 general election.