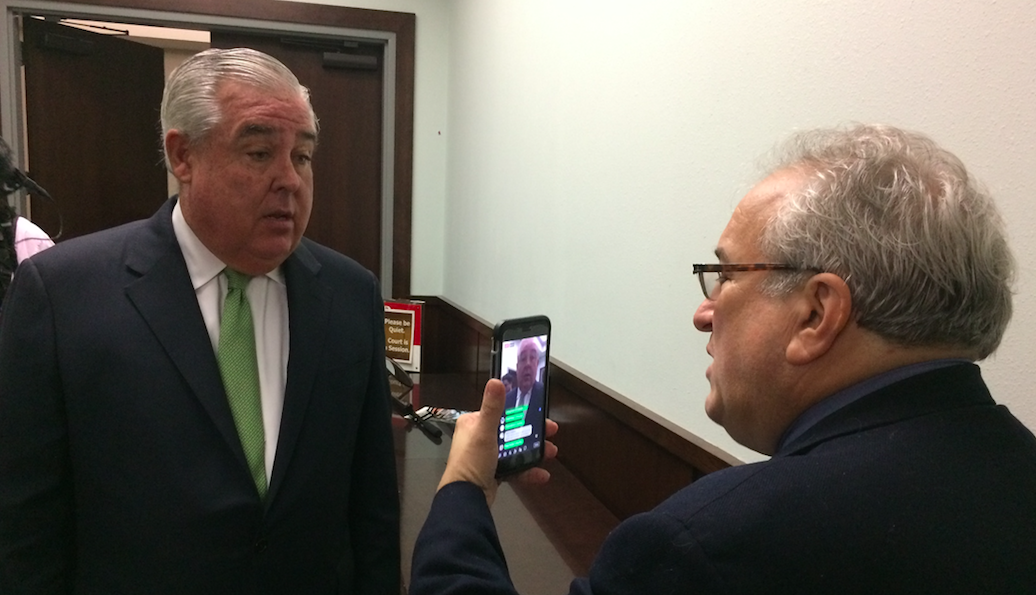 It’s now up to a Tallahassee judge whether the Legislature overstepped when it outlawed the smoking of medical marijuana.

Attorneys for the state and patients who want to smoke the drug squared off in a Leon County courtroom Wednesday before Circuit Judge Karen Gievers. She didn’t immediately rule after the close of evidence, but could issue a decision as early as tonight, if previous experience holds.

The highlight was plaintiff Cathy Jordan, a Manatee County woman who has Lou Gehrig’s disease, uses a wheelchair and struggles to speak. She testified she’s been smoking marijuana since the late 1980s: “I figured, ‘what the heck, what’s it gonna do, kill me?’ “

The issue was whether lawmakers’ ban on smoking runs counter to the constitutional amendment on medicinal cannabis, spearheaded by Orlando attorney and entrepreneur John Morgan, that was approved by voters statewide in 2016.

Morgan, who sat at counsel’s table but did not participate in the one-day trial, placed the blame solely on Gov. Rick Scott. He signed the medical marijuana implementing law that bans smoking.

He’s “the CEO of the state,” Morgan said after the trial. “Look, people are screaming for this, and he does nothing about it. I think there’s a whole story to be told here about (the state) trying to deny the will of the people.”

Plaintiffs’ attorney Jon Mills argued that the amendment’s use of the definition of the drug in a state law is key.

It says “cannabis” means “all parts of any plant of the genus Cannabis, whether growing or not (emphasis added); the seeds thereof; the resin extracted from any part of the plant; and every compound, manufacture, salt, derivative, mixture, or preparation of the plant or its seeds or resin.”

If the state can prohibit smoking, why not vaping, or edibles, or indeed, “why not just outlaw” medical marijuana itself, he asked.

Senior Deputy Solicitor General Rachel Nordby countered that the smoking ban is “entirely consistent” with the state’s role to regulate public health. She said the Department of Health, the named defendant, can address “reasonable health and safety concerns,” including smoking.

The state does allow ‘vaping’ as an alternative, she added, because of scientific evidence advising against smoking as an “inhaled method” of delivery.

But Jordan testified she must smoke marijuana because it helps dry up her saliva, which she otherwise chokes on. (Her husband, standing beside her at the witness stand, helped ‘translate’ some of her answers.) It relaxes her muscles, helps prevent further atrophy, and increases her appetite, she said: “It makes my life a lot more bearable.”

She added: “I was given three to five years to live. I’m still here … I’m amazed at my health.”

But Jordan also raised some eyebrows when co-counsel George Coe asked her if she would smoke marijuana legally. She at first suggested no, saying “I grow it in my yard.” Asked to clarify, she later said she would: “That’s why I joined this case.”

Another plaintiff – Diana Dodson, who has HIV and AIDS – testified she “would not be alive today without cannabis,” adding that “smoked cannabis works best for me.”

Dodson, who’s previously from California, said she could not currently afford to get a state medical marijuana patient ID card, however. Medical marijuana also is not covered by health insurance.

And Ben Pollara, head of the pro-medical marijuana Florida for Care organization, told the court smoking “is how most patients consume the medication.” The group claims 41,000 members.

He also referred to an “intent statement” for the amendment that says it “does not require that the smoking of medical marijuana be allowed in public.” Conversely, that means smoking is allowed in private, such as in one’s home, he said.

In an interview, Morgan also questioned whether the Health Department’s Office of Medical Marijuana Use, which regulates the drug, was “inept” or “malicious.”

Lawmakers have been upset for months, mainly over what they call the department’s slow-going in implementing medical marijuana under the amendment, which passed by 71 percent.

“You can’t be this bad,” Morgan said. “It’s like if you went to get to your driver’s license, and stood there all day, and didn’t get to take the test. ‘Sorry, couldn’t get to you, come back tomorrow’ … It becomes malicious. And the person controlling that is Gov. Scott.

“…You couldn’t f–k up this bad unless it’s intentional,” he added. “Enough is enough. Let’s stop the politics. Let’s let these people live.”

“It was the Legislature’s duty to outline how to implement Amendment 2 and the Department of Health has been working nonstop to implement the law that was passed with an overwhelming bipartisan majority,” he said.

“Currently, there are more than 109,000 patients that have access to medical marijuana in Florida and DOH has certified nearly 1,400 doctors who can prescribe this treatment. Also, in addition to home delivery, there are 35 locations across Florida where patients have access. Implementing Amendment 2 has been delayed by the constant litigation filed by special interests.”

A thread of live tweets from the trial is here.

nextJack Cory: It is time to do away with the Constitutional Revision Commission