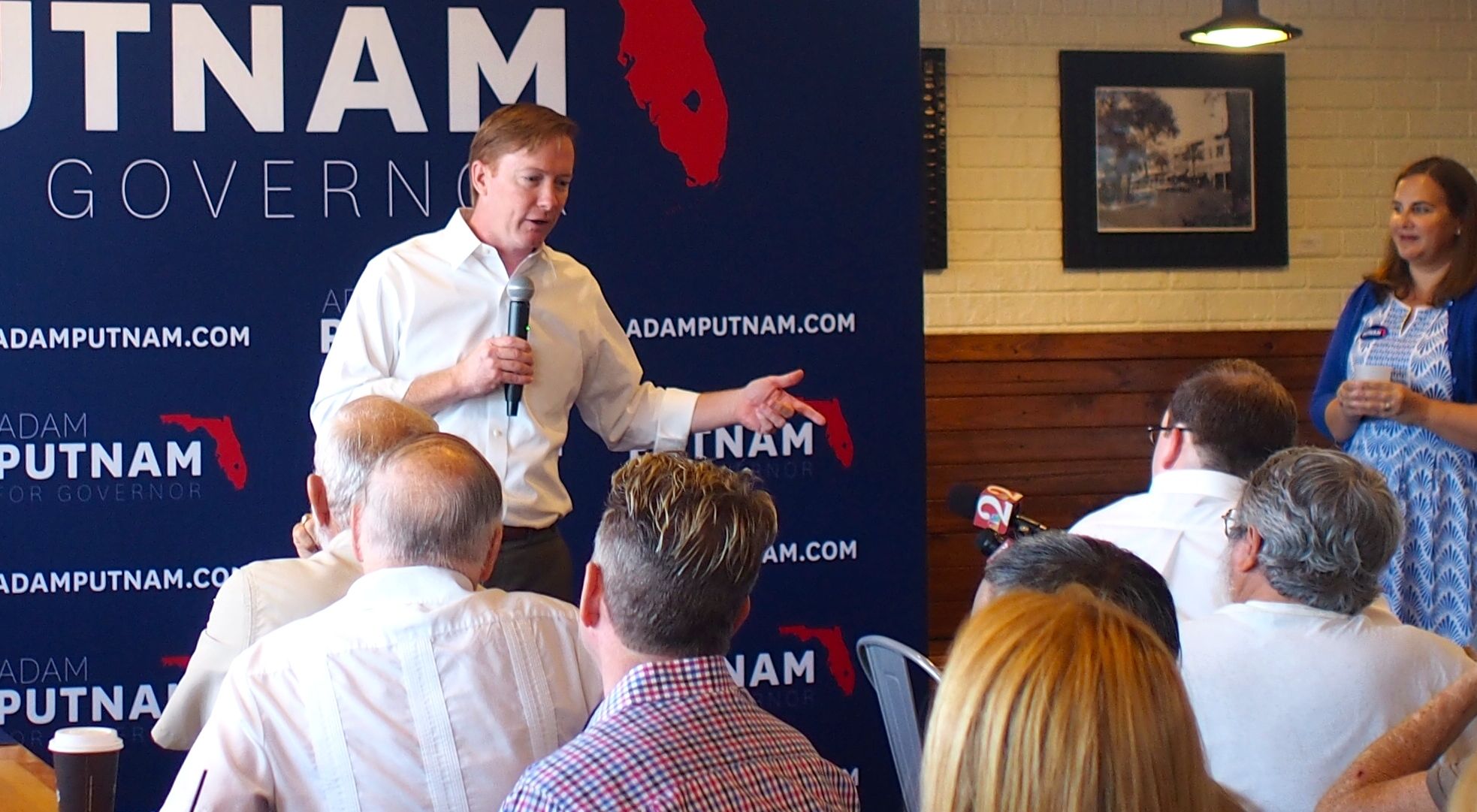 An upbeat Adam Putnam started his latest tour of restaurants and backyard barbecues expressing confidence in Winter Park Friday that his 16 months of cultivating grassroots yet will pay off in the Aug. 28 Republican gubernorial primary against U.S. Rep. Ron DeSantis.

“I’m pretty excited about a poll that came out right here in Orlando, a local TV station that essentially shows it a dead heat,” Putnam declared, referring to a poll done by Spectrum News 13 that shows. “The only poll that matters comes on election day, and as you can see from the grassroots energy all over the state, I feel very good.”

That poll had DeSantis up 40 to 38, with 16 percent still undecided. The gap was within the 5 point margin of error.

Putnam held one of his “Up & Adam” breakfast talks before a packed and enthusiastic house at the 4Rivers restaurant in Winter Park Friday morning. The event was not unlike countless he’s arranged and spoken at in Orlando and cities and small towns throughout Florida since launching his campaign in the spring of 2017. Yet this summer he watched DeSantis, who until June had campaigned largley through FOX News appearances, zoom past him in polls and start hosting large, raucious rallies after getting the endorsement of President Donald Trump.

Putnam, Florida’s agriculture commissioner, has tried hard to embrace Trump and work him into much of his own campaigning, but

For the past six weeks Putnam, Florida’s agriculture commissioner, has been playing catch-up against Trump’s candidate, DeSantis. Putnam has been trying hard to embrace Trump and work him into much of his own campaigning, while still characterizing the race as a “Washington-centric candidate” versus a “Florida-First candidate.”

That Florida First message, his campaign theme, mixed with Trump references throughout his 4Rivers stop. And he’s turning back to his grassroots appeal in the closing days, while staying on his basic points of pushing technical education, low taxes for small business growth, and intimate knoweldge of the state’s economy and local nuances.

“So we’re going to be bouncing all around Florida, up and down the I-4 corridor, up and down I-75 and I-95 and throughout the Panhandle. We’ll be making multiple stops a day, whether it’s at barbecue restaurants, coffee shops, businesses or people’s back yards,” he said.

“If you want to be governor of the third-largest state, if you want to manage a trillion-dollar economy, you better be willing to roll up your sleeves and be amongst the people,” he said. “Understand their concerns, listen to their challenges, and offer your own vision on how we’re going to make Florida a stronger, better place.”