Board of Education chair Tom Grady federally indicted, faces up to one year in prison for water dispute 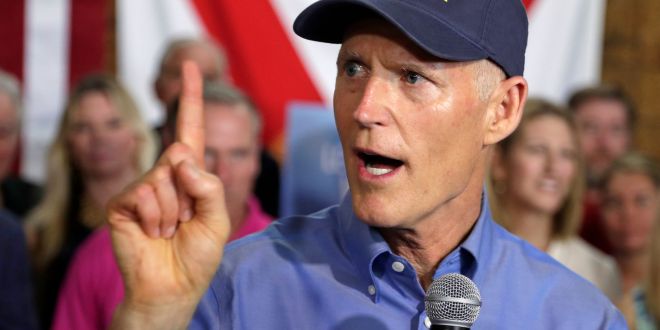 Gov. Rick Scott urged those living on the coast who have not evacuated from Hurricane Michael to bear down and find cover in a Wednesday appearance on CBS This Morning.

His comments echoes those he made earlier in the morning on Twitter, saying, “The time for evacuating along the coast has come and gone.”

The time for evacuating along the coast has come and gone. First responders will not be able to come out in the middle of the storm. If you chose to stay in an evacuation zone, you must SEEK REFUGE IMMEDIATELY.

CBS This Morning’s John Dickerson asked him about those remarks made on Twitter.

“What if I’m in the middle of evacuating and hear that?,” Dickerson asked. “What do I do?”

“Well, you’ve awaited too long,” Scott replied. “You’ve got to hunker down. You’ve got to get shelter as quickly as you can.”

Scott warned that while the winds and the rain are dangerous, the more pressing concern for coastal residents is the potential of a large storm surge.

He then turned toward the safety measures the state has readied to deal with the storm’s aftermath. But he warned these resources will not be available during the storm’s strike.

“We have 3,500 members of the National Guard I’ve deployed,” Scott noted. “We have over 1,000 rescue individuals that are ready to come as soon as this thing passes. But they cannot rescue you during the middle of this storm. Don’t go out in the middle of the storm and try to get somewhere.”

Anchor Norah O’Donnell then pressed the Governor on the availability of shelters throughout the Florida Panhandle.

“Some of these counties that are going to be impacted by the storm don’t even have shelters or the shelters that they have are only built to withstand up to a Category 2,” O’Donnell said.

“Some of the counties, like Taylor County, we don’t even have a shelter in the county because it’s too low lying,” Scott replied. “Our evacuation orders were for the entire county.”

“Are those shelters safe?” O’Donnell pressed.

“We work to make sure the shelters we’re opening are safe,” Scott said. “We have National Guard members there. We have Red Cross there. We’re going to do everything we can to keep everybody safe.”

He then closed the interview with one final warning for those who have chosen to stay and bear the brunt of the storm.

“It’s so frustrating, I’ve spent the last two days traveling the coast to get people to evacuate,” Scott lamented. “And those that elected not to evacuate, I’m very concerned about their safety now.”