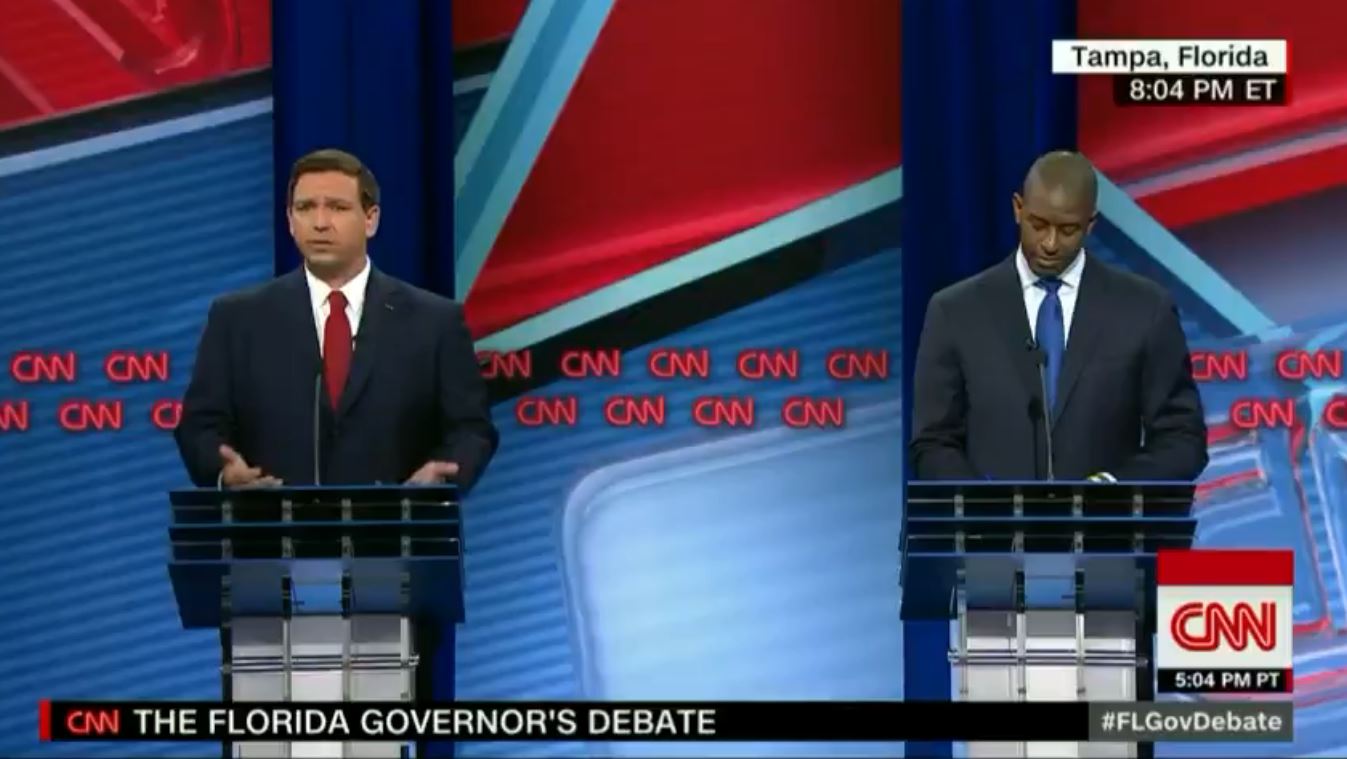 It shocked no one when Republican gubernatorial candidate Ron DeSantis at Sunday night’s CNN debate raised the issue of a Dream Defenders pledge signed by Democratic opponent Andrew Gillum in June.

“The fact is, Andrew signed a pledge with the Dream Defenders pledging his support, this radical manifesto.” DeSantis said.

“I have no idea what pledge he is talking about,” Gillum said.

The pledge this week spurred a number of law enforcement leaders to blast Gillum on Fox News, with robocalls and any way possible.

And for months, the Dream Defenders group itself touted the pledge by Gillum as a way to motivate the base, helping the Democrat secure his party nomination along the way.

So where’s the disconnect between the document Gillum signed, alongside now-running mate Chris King, and the statement made on the debate stage that he recalls no such thing?

The Dream Defenders say it’s a matter of differentiation between the two-page candidate pledge, which boasts signatures from 30 candidates running for office in Florida this year, and the “Freedom Papers,” a much lengthier booklet put out by the group.

Yet the pledge the Dream Defenders themselves boast he signed says by signing the pledge you support the Freedom Papers. So, by signing one, by their own pledge, it means he agreed to both. 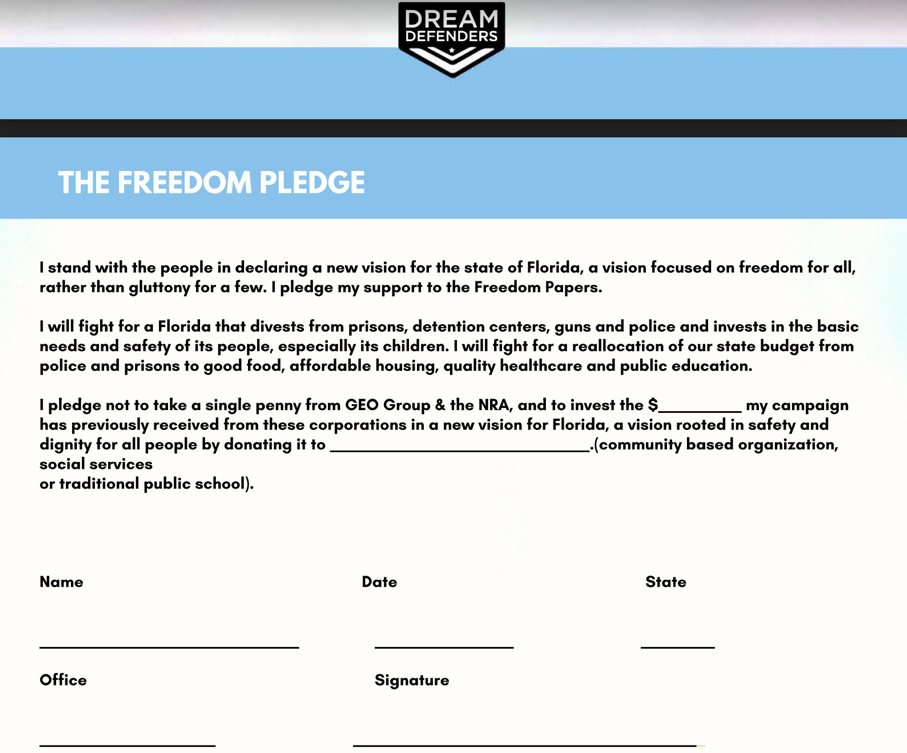 Rachel Gilmer, co-founder of the Dream Defenders, describes the Papers as a vision for “what it would look like to live in a state that prioritized the needs of people over corporations.”

“What we’ve seen over the last 40 years is politicians putting more into prisons and police rather than dealing with the root causes of why conflict happened in our communities in the first place,” she said.

But the document includes passages that draw the ire of police representatives.

It read: “Police were never meant to serve me and you … Police and prisons since their founding have always been about safety for the haves while wreaking havoc for the have-nots.”

“From a law enforcement perspective, when you have a potential candidate for the next governor who’s willing to sign a pledge with an anti-law enforcement, anti-government radical group such as the Dream Defenders,” Bell said, “he’s clearly sending a message to the voters before Election Day that he’s willing to support, defend and recognize radical groups like the Dream Defenders and he supports radicalization over the rule of law.”

Notably, it’s information about the Freedom Papers that greets web visitors when they first go to the Dream Defenders website. Guests at the page are encouraged to sign onto the Papers, and there’s little mention of the Pledge.

The Dream Defenders promoted the Papers Sunday in a tweet before the debate, as DeSantis noted on his own feed. 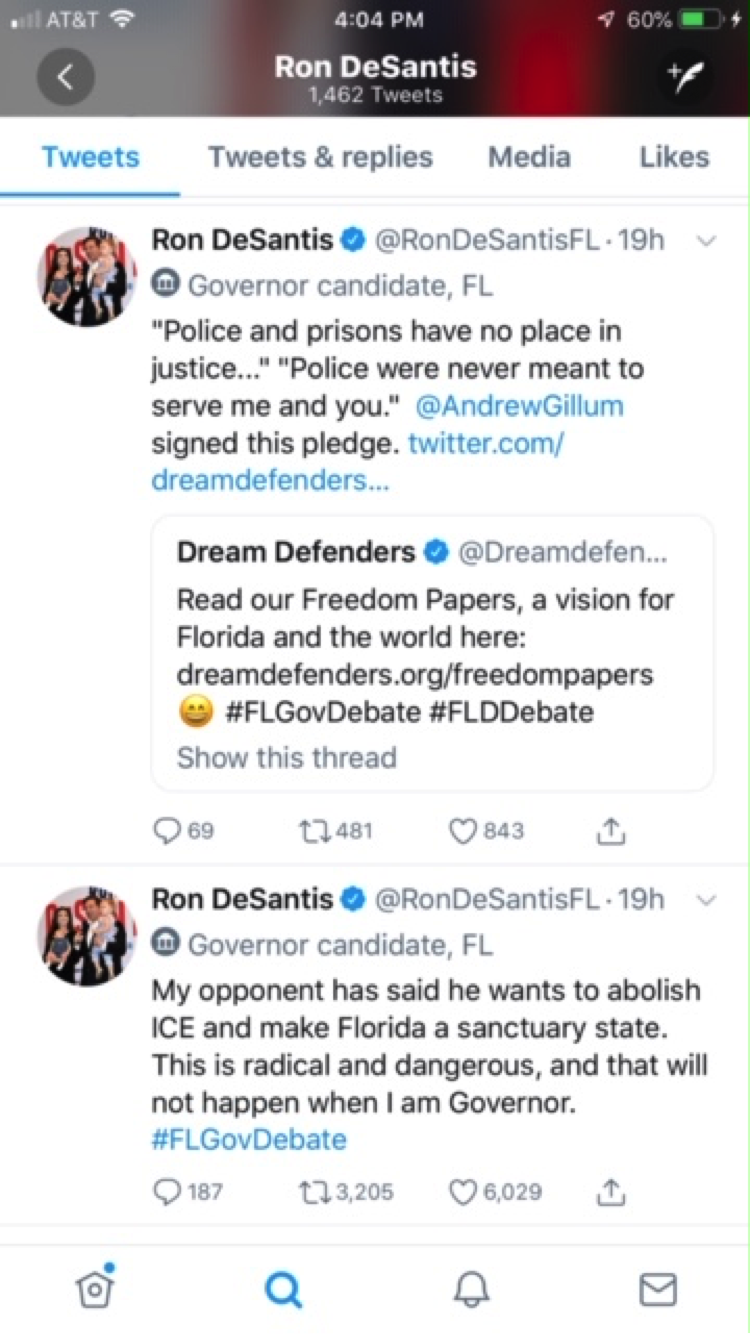 But Dream Defenders make a distinction between that document and the pledge.

Gillum on June 11, the day of a Freedom Forum hosted by the Dream Defenders, signed the Freedom Pledge, as did the other major Democratic candidates running for governor at the time: King, Gwen Graham, and Philip Levine.

On stage, every candidate vocally pledged not to accept financial contributions from private prison companies like The GEO Group.

Gillum at the CNN debate acknowledged that much of the commitment.

“The only thing that I said is that as Governor, I will not see private prisons operating here in the state of Florida,” he said.

“If you want to know about my record with police, because I have public defenders and sheriffs all over this state who endorse me in this race for Governor, we hired more law enforcement officers so they could do their job.”

“We’ve always been very clear, we are not in lock step with Andrew Gillum, and he’s not in lockstep with us,” Summers said.

The group notably holds different views with Gillum about Israel. The group describes Palestinian uprisings there as inspiring acts of “resilience and resistance.” Gillum calls such actions counteractive to a two-state solution.

Gillum, though, stressed his area of agreement with Dream Defenders on prison reform. When Politico reported on law enforcement anger at the Dream Defenders pledge, Gillum’s campaign released a statement: “He will not take money from the private prison industry and instead will invest in community policing, smart justice and strategies that work with communities to reduce crime and create better opportunities for all Floridians.”

Dream Defenders leaders say the whole reason they seek out signatures is to hold candidates they support accountable to the people instead of special interests. But Summers doesn’t especially mind if Gillum distances himself from the group right now.

“It’s about holding Andrew Gillum accountable once he is in office,” Summers said.

The DeSantis camp, though, won’t let the issue go ignored.

DeSantis himself noted the odd stance of the Dream Defenders rushing to Gillum’s defense with the Pledge-versus-Papers defense by posting a chin-scratching emoji.

And he’s continued to stress his own support from the law enforcement community in contrast with the apparent antagonism facing Gillum, as he did on the debate stage.

“They say the police and prisons have no place in justice and that law enforcement should be defunded and the money diverted for welfare programs,” DeSantis said. “The people who put on that uniform and risk their lives for us should be applauded. They should not be denigrated by a radical pledge.”

With just two weeks until Election Day, it’s likely the pledge will keeping coming up.

nextJimmy Patronis: Banks need to give a break to hurricane victims