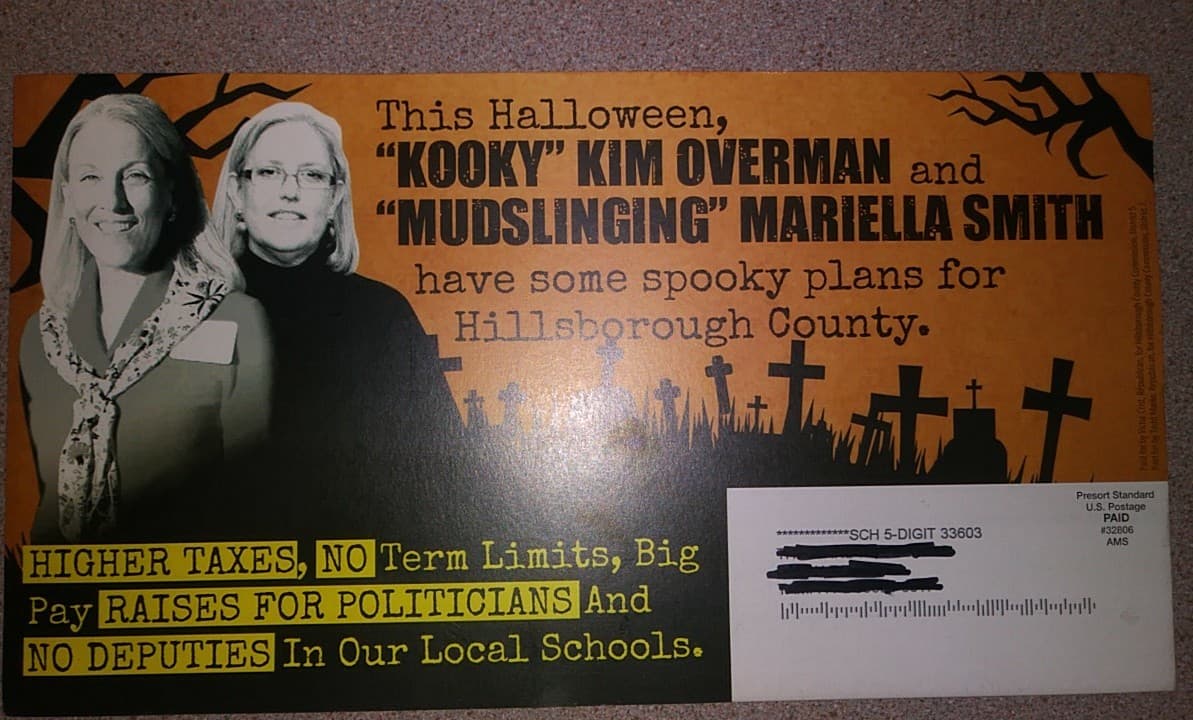 Except there’s no factual support for that claim.

“It’s a complete lie,” Smith said of the claim. “I just don’t know how they sleep at night.”

Overman said she has no idea where Marks and Crist got that number.

Marks and Crist did not respond to requests for comment and their campaigns did not clarify where they got that information, but the mailer cites the Democratic Progressive Caucus of Florida’s website.

There is no reference to an $18 billion tax hike on that site.

That tax would raise $9 billion over its 30-year life, if approved. However, the conservative website Sunshine State News offers several estimates for the tax ranging anywhere from $15-$18 billion.

Even if the tax estimate were accurate, Smith said she has not taken a stance on the All For Transportation sales tax initiative.

“These are matters for the voters to decide,” she said.

The Halloween-themed mailer describes Overman as “kooky” and Smith as “mudslinging” and cautions voters that this Halloween they should be very afraid of the two. 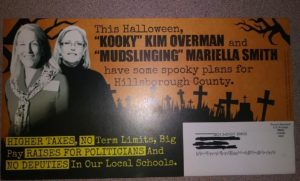 It also makes several other dubious claims including that the two oppose deputies in public schools, support pay raises for politicians and oppose term limits. 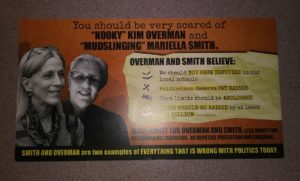 Smith has not made direct statements on any of those claims and the mailer offers no citation for the allegations.

Smith said her opponent, Crist, is projecting his own track record onto her.

Crist has been a Hillsborough County Commissioner since 2010. Commissioners are limited to two four-year terms, but a loophole allows them to “seat swap” between single member and countywide seats. Crist is term-limited out of his current District 2 single-member district in north Hillsborough and is now running for the countywide District 5 seat.

Overman said she believes there should be term limits, but doesn’t mind commissioners being able to serve their full two-terms in both a single member and countywide district, but “if you can’t get it done in 16 years, you need to leave.”

“Sometimes issues, especially transportation, take a good decade to see through and as commissioners, we should be able to get that done,” Overman said.

On pay raises for politicians, both Smith and Overman said they are opposed.

Many Democrats in Florida have called for pay raises for state lawmakers who are paid for part-time work rather than a full-time living wage salary. The claim there is that paying less than $30,000 a year for state elected office discourages working-class Floridians from running for office and instead leaves those seats open for independently wealthy residents who can afford to take the financial risk.

However, that’s something on which Smith and Overman said they’ve never taken a position.

Smith also said she does believe deputies should be in Hillsborough Schools to keep students safe, but contends the allegation is baseless because she’s running for Hillsborough County Commission, not the school board.

“There’s nothing in the purview of my campaign that applies to whether or not we have deputies in school,” she said.

Overman said there are already school resource officers in middle and high schools, but thinks alternative school safety measures should be considered for elementary school.

“I guess you could say I prefer we have various different safety measures in place so we’re not scaring our kids. In some of our communities, a person with a gun might be someone who would shoot them,” Overman said.