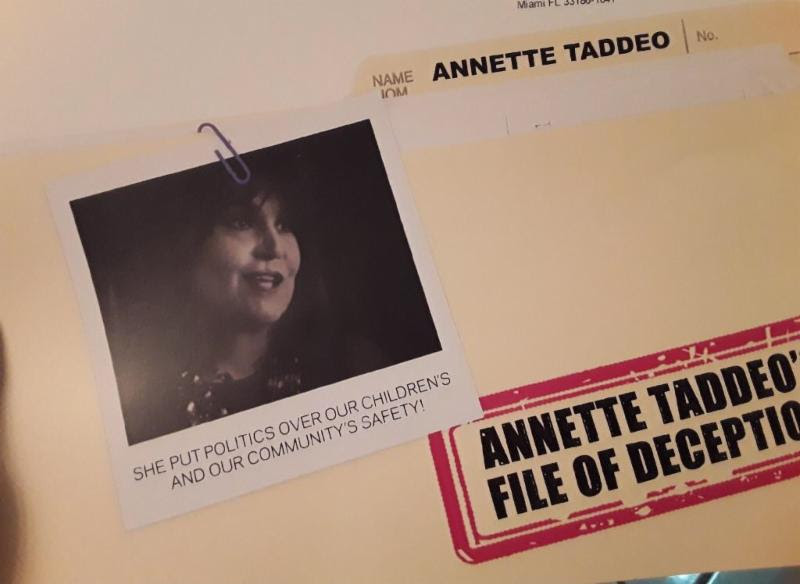 The campaign for state Sen. Annette Taddeo is accusing her opponent of circulating a mailer featuring Taddeo in an effort to “purposely lie” to voters in Senate District 40.

The mailer highlights a letter sent to Taddeo by Marion Hammer, a well-known lobbyist for the NRA.

In the letter, Hammer thanks Taddeo for her March vote against the Marjory Stoneman Douglas Public Safety Act.

That act was passed in response to the February shooting at Stoneman Douglas High School in Parkland. It contained several gun control measures opposed by the NRA.

But that’s not why Taddeo, a Democrat, voted against the bill. Instead, she opposed other language which allowed for the arming of school staff.

The mailer, featuring Hammer’s “thank you,” makes it appear Taddeo is sympathetic toward the NRA’s position. Taddeo is attempting to defend her seat against Republican challenger Marili Cancio, who is framing herself as a centrist in the race and says she would have supported the bill.

Taddeo’s camp alleges the campaign was coordinated in part between Hammer and the Republican Party of Florida. The mailer notes it was funded by “Friends of Marili Cancio,” a PAC supporting the Republican’s campaign.

“Voters in Senate District 40 were peppered with a mailer from Marili Cancio in a desperate move to save her losing campaign,” said Christian Ulvert, a Taddeo senior advisor.

“Marili Cancio launched campaign mailers from her political committee that are not only false, but an outright lie. She falsely portrays that the NRA is appreciative of Senator Taddeo knowing full-well that that NRA rated Taddeo with an F because of her record of taking them on to pass real gun safety reform.

“The bottom line is that voters in district will see right through this failed attempt by Marili Cancio to purposely lie to them.”

Ulvert says the RPOF and Hammer played a role in these mailers as well. For one, Hammer wrote the “thank you” letter featured in the ad on Sept. 21. Ulver notes that’s well after the legislative session ended, implying the letter was a political ploy.

Ulvert says voters began receiving the mailers on Oct. 22, and calls into question how such a campaign could be organized in the span of a few days. Thus, he claims the RPOF and Hammer must have coordinated outside of the bounds of the records request, in order to ready the mailers.

According to the Miami Herald, Cancio said she was aware of efforts to make the records request for the letter beforehand, but said she had never met Hammer.

Hammer also told the Herald her letter was sent in September because her first letter to Taddeo was never received.

The RPOF pushed back fully on the Taddeo campaign’s allegations in a statement to Florida Politics.

“If she paid any attention to what’s going on she would know that the person requesting the information is not an employee of the RPOF, and that Senate campaigns operate independently from us.”

The RPOF pointed out that their general counsel is Ben Gibson of Shutts & Bowen. The public records request was sent by Bucky Mitchell of Coates Law Firm.

“In addition, a quick phone call to the attorney revealed that Taddeo’s office responded to the public records request with ‘no responsive documents,'” Ingoglia added.

“So, in essence, Taddeo is accusing Republicans of collusion when there were no documents to collude with. My suggestion to Sen. Taddeo is check in with her office every once in a while to find out what’s going on in her district. Her constituents would probably appreciate it.”

In the piece by the Miami Herald, Ulvert said the first search for the Hammer letter following the records request failed because Hammer’s name did not appear in the email containing the letter. Instead, the letter was an attachment, which was not searchable. 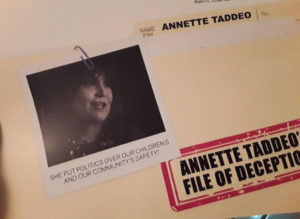 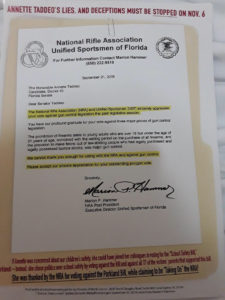