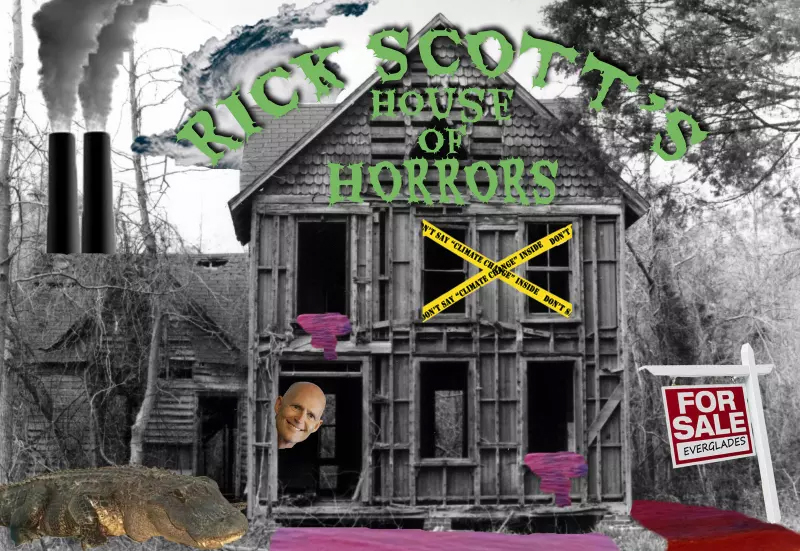 Environmental group Sierra Club is getting ready for Halloween with a new quiz inviting Floridians to face their “most rational worst fears” when it comes to Gov. Rick Scott’s environmental policy.

“Halloween is right around the corner, and, tbh, there’s some super scary stuff going on this year. Bomb threats, white nationalism, embattled midterm elections, and a new IPCC report that predicts climate catastrophe by 2040 if we don’t get our act together and transition to renewable energy ASAP,” the Buzzfeed quiz reads.

After a primer on the challenges climate change is expected to bring to the Sunshine State, the Sierra Club takes aim at Scott, whom they said has “repeatedly denied the existence of human-caused climate change, and throughout his political career has been in cahoots with the fossil fuel industry.”

The quiz takes the Halloween theme and runs with it, casting the Republican U.S. Senate candidate as everything from  fortune teller with a magical ability to deny climate change to a vampire “sucking Florida’s lifeblood with cuts to environmental protections.”

“You write down ‘climate change’ and ‘global warming.’ No sooner have you done this than Rick Scott glides his hand over the sheet of paper. Magically, inexplicably, the letters lift off the page, disappearing into his hand,” the post reads, referencing Scott’s ban on Florida government officials using those terms.

The seven-question quiz invokes imagery from Halloween classics ranging from the early 1920s Dracula knockoff Nosferatu to more modern films such as Ghostbusters — the character “Slimer” is used as an analogue for the blue green algae bloom wreaking havoc on the Florida waterways.

Those who make it through the “House of Horrors” are confronted with one final challenge: “Elated, you take the pen. Scott knows his destruction is near. He lunges towards you… And…” The choices are either “vote” or “faint.”

Those who choose the former option get the happy ending, at least in the Sierra Club’s eyes.

“Rick Scott is too late! You’ve taken the silver pen and filled in the bubble beside Senator Bill Nelson’s name! This is the death knell for the zombie in front of you and the fossil fuel industry that controls him. Zombie Scott falls to the ground, immobilized. Some of the color returns to his face. Could it be that he’s regained control of his own brain?

“Maybe… maybe climate change really is a real, serious, immediate threat to human existence,” you hear him gasp. But you’re already on your way out. You’ve had enough of Rick Scott’s House of Horrors for one election cycle,” the quiz concludes.

The Nelson vs. Scott contest is one of the most competitive, and most watched, U.S. Senate races in the country. Scott, term-limited as Governor, had telegraphed his intention to challenge Nelson for months before entering the race in April and quickly taking a polling lead on the back of a massive media blitz.

As Election Day drew closer, however, Nelson has gained in the polls and the two men are engaged in dogfight for the Senate seat.

RealClearPolitics polling average of the race currently shows Nelson with a 2.6 percentage point lead over Scott, while elections forecaster FiveThirtyEight gives the third-term Democrat 5-in-7 odds of holding on to his seat come pencils down on Nov. 6.