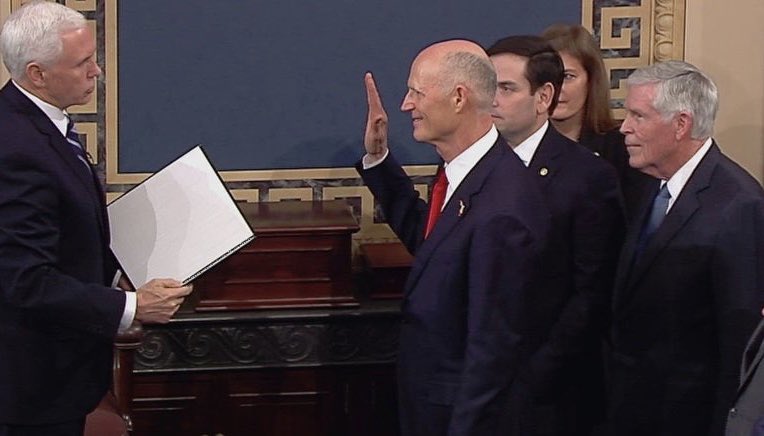 “Our party is stronger when we share our message with all Americans,” Scott said Saturday on Twitter. “But you have to show up.”

The survey found 56 percent of Hispanic voters had a very or somewhat favorable view of Scott, compared to 53 percent who said the same of Nelson.

The survey in fact found Sen. Marco Rubio, one of three Cuban-Americans now serving in the Senate, in comparison had 53 percent favorables with Hispanic voters.

About 58 percent of those surveyed agreed with the statement Scott cares about Hispanics. A similar number said he’d made the state somewhere Hispanic voters could prosper.

The survey found 64 of Hispanic voters want somewhat or much stricter enforcement of immigration laws.

It also found 57 percent of those surveyed feel the term “nationalism” reflects patriotism, and just 30 consider the term racist.

About 69 percent of voters surveyed agree with the statement immigrants should assimilate to American culture and not create a separate culture within this country.

The survey included responses from 1,014 Hispanic voters in Florida based on bilingual interviews conducted Dec. 10-15. Pollsters report a margin of error of 3 percent.

Scott told the Examiner he worked through his eight years as governor to improve his Spanish and made constant inroads with Hispanic constituents.

The needs of the community remain no different than others, outside certain communication barriers, and Scott said he worked to address those.

“I put a lot of effort into making sure I could speak Spanish,” he said.

He rejected the notion any racial demographic should be ignored or considered un-winnable by a Republican candidate.

“As governor, what I found is most issues come down to one of three things: They want a job, everybody does. They want their kids to get a good education. And they want to live in a safe community,” Scott said. “And so what I did was I showed up, and I showed up and I talked to everybody.”