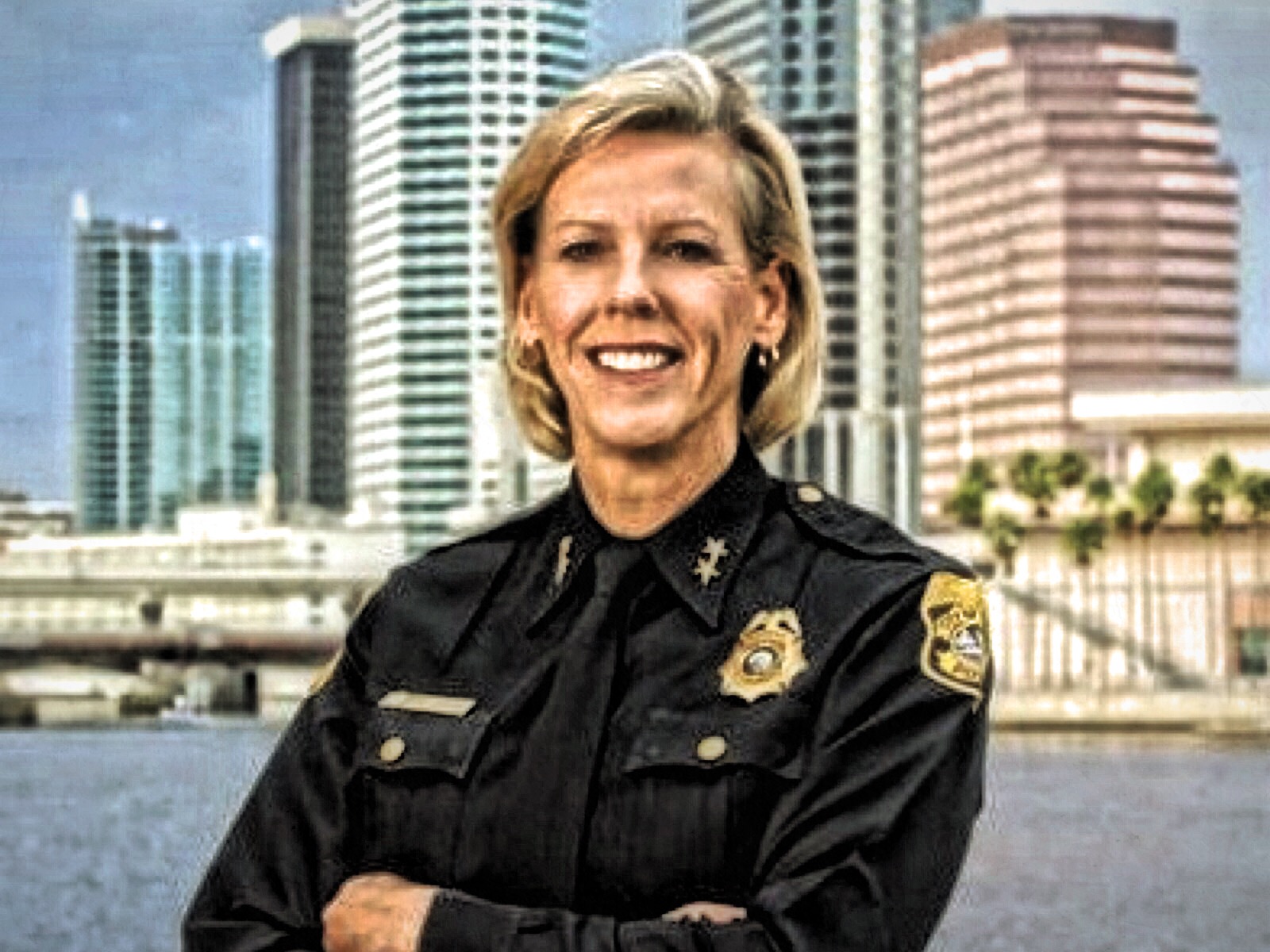 “I don’t apologize for the proactive nature of our officers.”

The direct mail piece hits Castor over the 2015 Tampa Bay Times “Biking while black” investigation that uncovered a disproportionate number of arrests and civil citations given to African-American residents particularly in low-income neighborhoods over minor biking infractions.

“I don’t apologize for the proactive nature of our officers,” the mailer quotes Castor saying from an article in the Times in April of 2015. 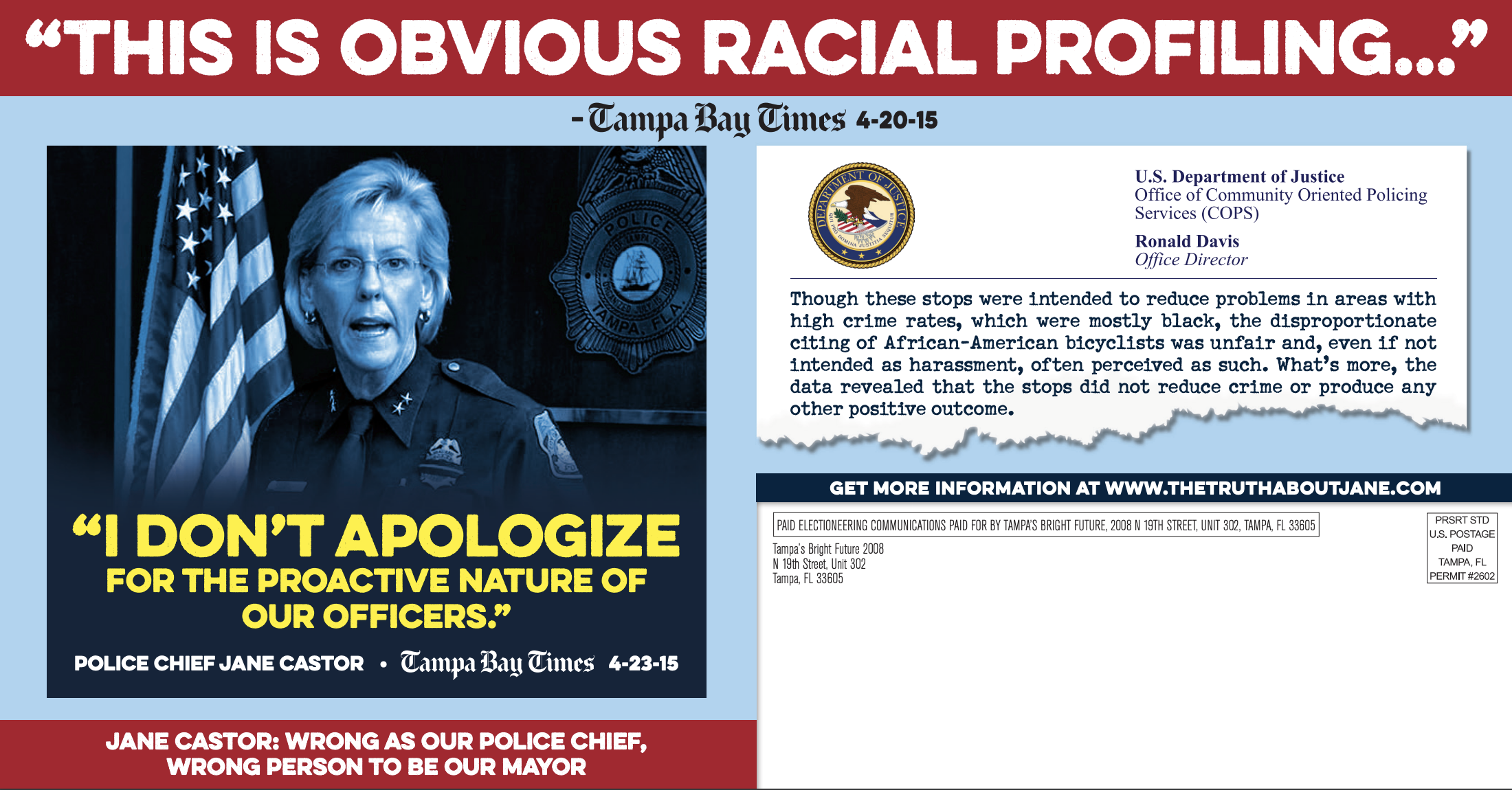 Castor stood by the agency’s policy at the time but has since said it was a well-intentioned policy that in hindsight, wasn’t a good idea.

The mail piece also quotes the U.S. Department of Justice’s findings on the investigation.

“Though these stops were intended to reduce problems in areas with high crime rates, which were mostly black, the disproportionate citing of African-American bicyclists was unfair and, even if not intended as harassment, often perceived as such,” the quote reads. “What’s more, the data revealed that the stops did not reduce crime or produce any other positive outcome.”

The front of the mailpiece evokes painful memories of New York City’s controversial “stop and frisk” program in which officers were allowed to detail and pat down people with very little probable cause.

“If you were black and low income and riding a bike, Police Chief Jane Castor wanted you stopped and frisked,” the mailer reads. 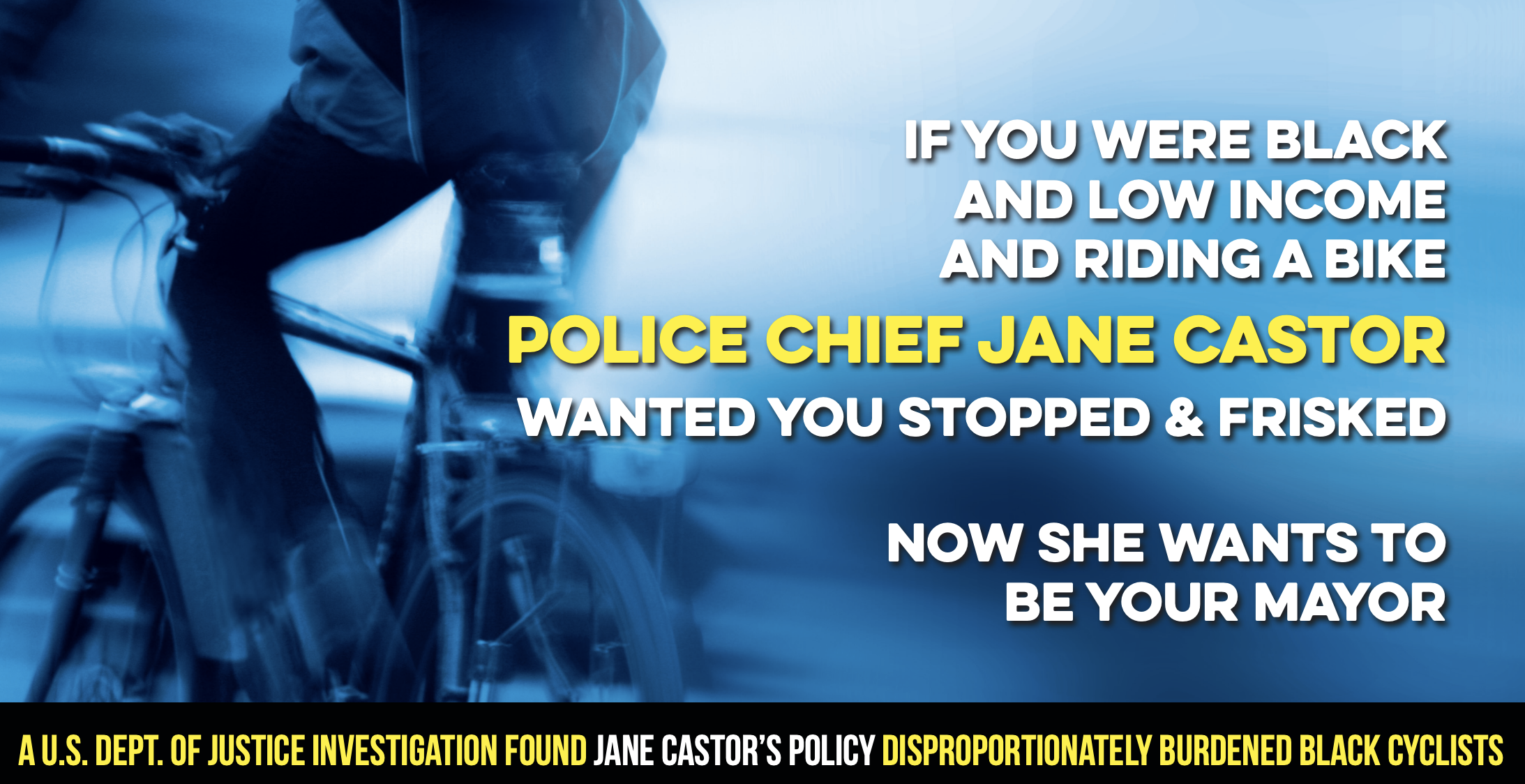 While some voters received the negative ad, they might have also gotten a positive one from Castor’s political committee, Tampa Strong.

“Tampa is the best place to live and work, and as Mayor, I’ll bring in even more good jobs — making Tampa better than ever,” a quote next to a photo of her reads.

It shows Castor next to a colorful map of the city with its neighborhoods outlined and pins showing “good jobs here” throughout the city. 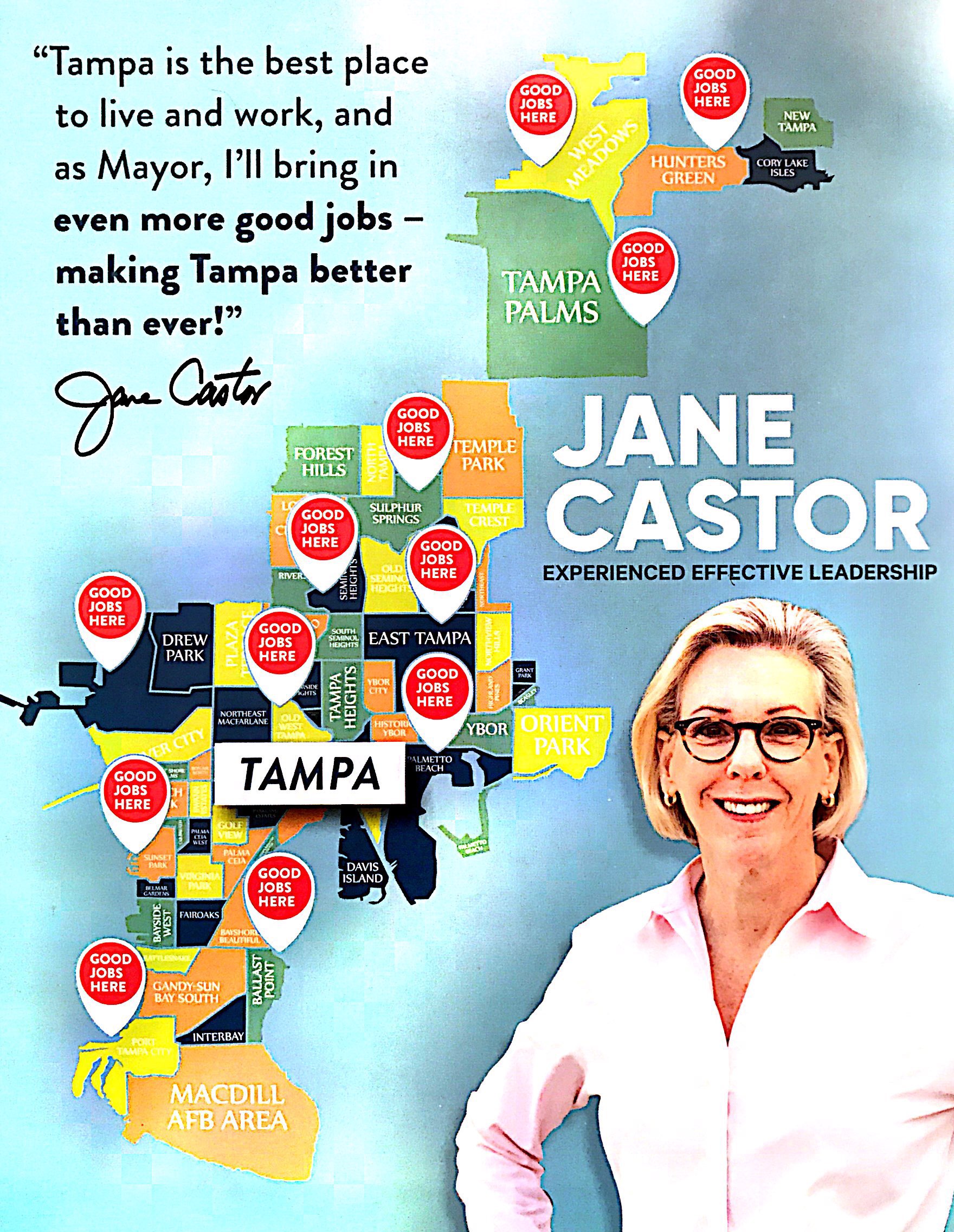 The other side continues that theme highlighting Castor’s promise to create a more skilled workforce.

“She will work with public-private partnerships to develop and execute workforce development initiatives and skills training so our local residents and economy can become stronger together,” it reads.

“Tampa small businesses are the foundation of what makes our city a great place to live and work. With over 30 years of experience working with local merchants and neighborhoods, Jane knows the burdens small businesses face whether it’s getting your business started, going through the permitting process or keeping your business and customers safe — Jane will make sure the city is helpful and more accessible to make Tampa’s strong local businesses even stronger.”

“Tampa has some of the best and brightest talent and we want them to stay right here. Jane will connect educational institutions of all kinds with employers so we can keep our best and brightest while attracting even more employers to our diverse city. Jane is an effective leader who has kept our communities safer and made Tampa a great place to live and work.” 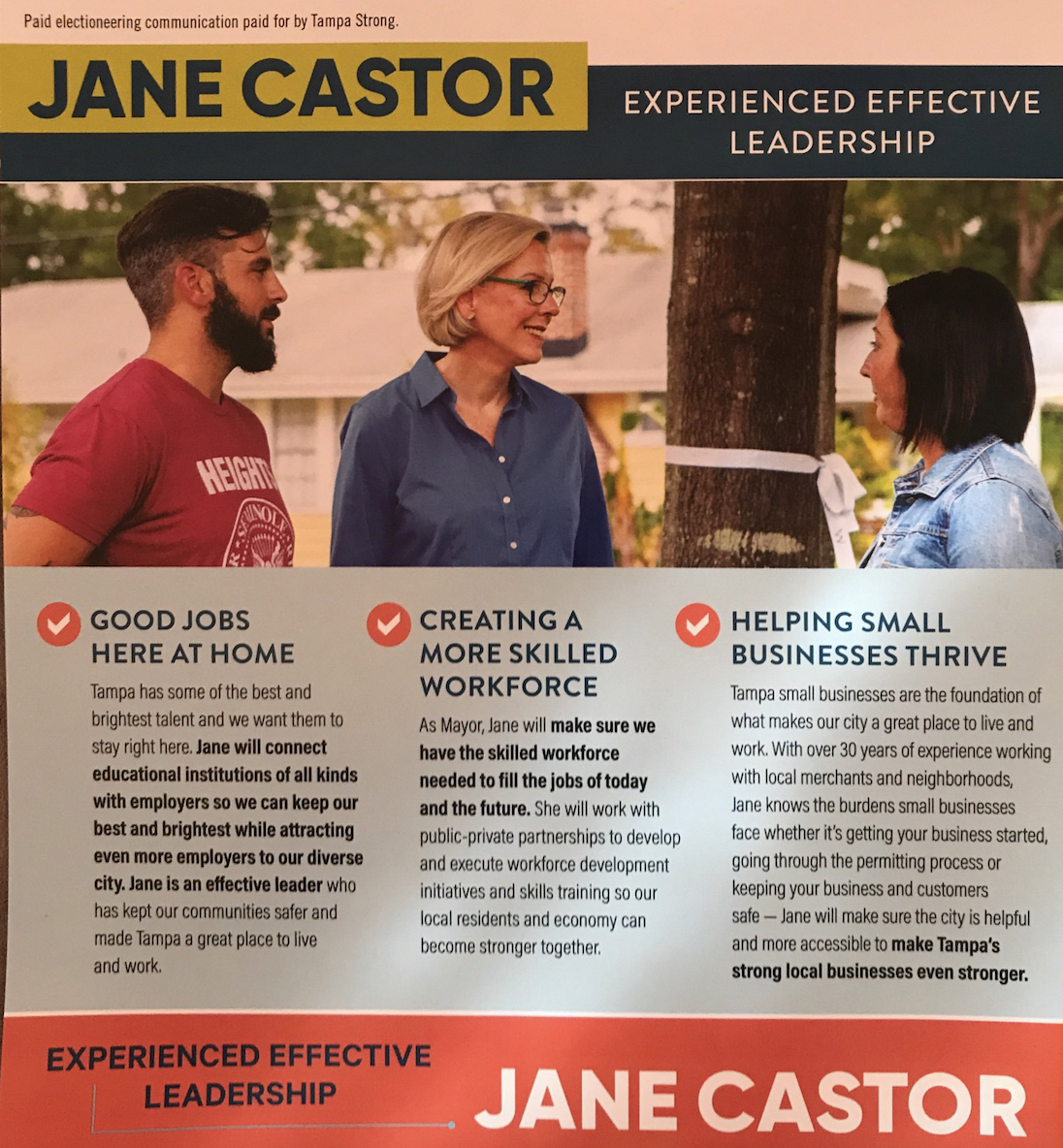 It lists some of Miranda’s endorsements including Hillsborough County Sheriff Chad Chronister and the Tampa Bay Times along with the write-ups that went with them. It also lists other endorsements from the Tampa Police Benevolent Association, the Greater Tampa Board of Realtors, the Tampa Firefighters local union, Equality Florida, La Gaceta and the Associated Builders and Contractors union, among others.

The flyer also includes a short resume of Miranda’s service as a sitting City Council member. 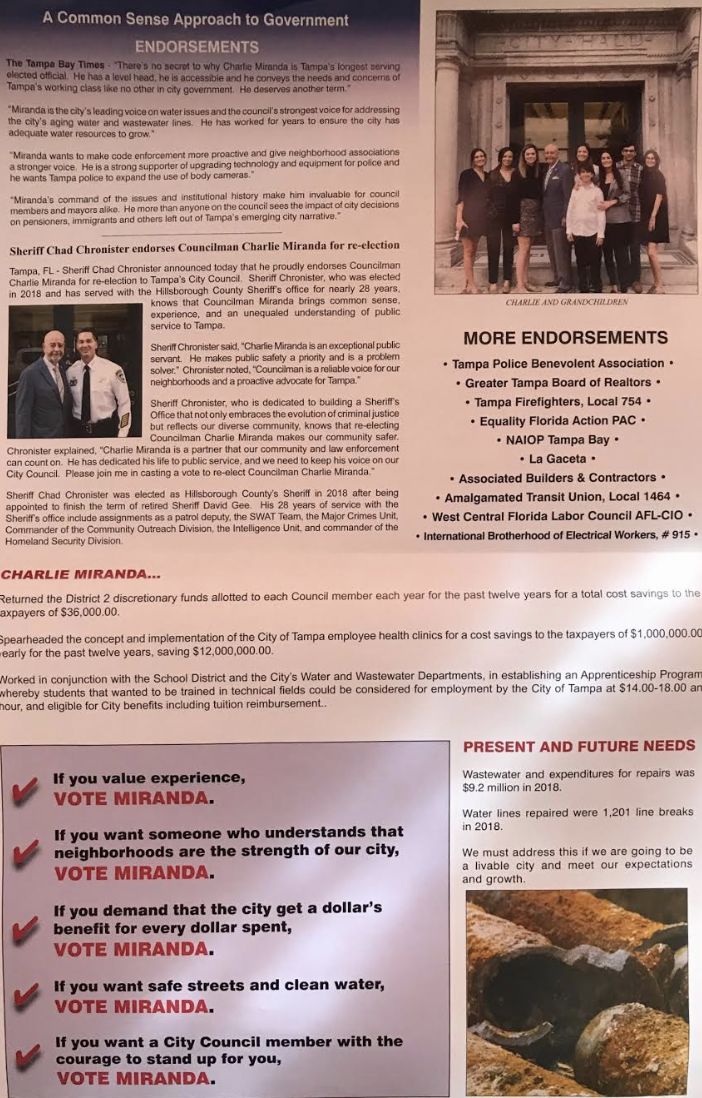 previousPassing the Buck: Straz gets an election committee, Castor gets thumped by it

nextFlorida needs a timeout from timeshares