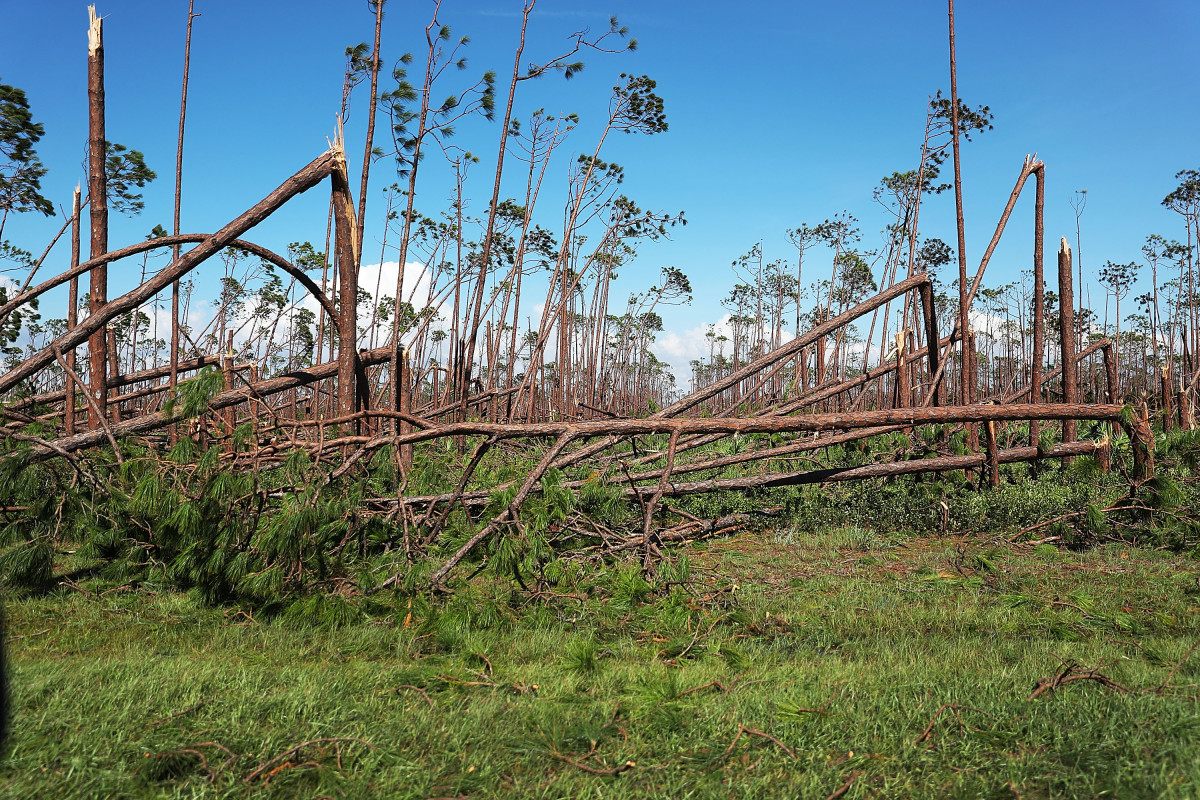 The zone of wreckage from the storm covers an area the size of New Jersey.

The final price tag could hit $167 million, Barbara Goodman, deputy director for lands and recreation at the Department of Environmental Protection, told Gov. Ron DeSantis and the Cabinet Tuesday.

The debris forms dams that in turn cause flooding — blocking roads, submerging private and public property, and threatening public safety.

Meanwhile, state officials estimate agricultural losses at nearly $1.48 billion, including $1.3 billion in timber, according to Jim Karels, director of the Florida Forest Service.

The storm caused catastrophic damage within a 20-mile swath, with 95 percent losses to forestry. Severe to moderate damage extended for 80 miles, ranging to 75 percent losses.

“There’s really a 40-mile swath there that will not have any timber for the next 15 to 20 years. How does that economy continue? How do those mills — from Panama City all the way up to the state line — continue to operate? What do we do in the future to ensure that economy remains strong?” Karels asked.

DeSantis and the Cabinet had asked the officials for the briefings on Michael recovery.

“What more can you do to mitigate this threat? What more can the rest of the state government do to help?” DeSantis asked. “And then, what can we do to get the federal government to help us as well? I want to be proactive as we can.”

Karels replied that the state lodged an aid request with Congress two weeks following the Oct. 10 Michael landfall “for help in this arena,” including with reforestation and “putting that economy back.”

Meanwhile, President Donald Trump recently extended the application period for federal aid, and the Legislature is debating a recovery package.

“People’s life savings, their retirement funds, their funds for their children’s college, all lying on the ground,” Agriculture Commissioner Nikki Fried said.

“This has got to be a state, a county, community, federal involvement to make sure this community gets back on its feet,” she added.

Counting Georgia, with which Florida is cooperating in assessing the damage, the Michael zone encompasses 5 million acres.

“This is the size of the state of New Jersey,” Karels said, calling the storm “a tremendous, tremendous setback to the landowners of the state.”

Access roads and firebreaks are blocked, limiting the state’s access to go in and clear debris. The work is difficult and dangerous, and in many areas wreckage will remain indefinitely, he warned.

As the felled timber dries out, the fire danger will increase. The fuel load is more than 10 times normal, as much as 5 tons per acre, totaling as much as 120 tons.

Some 223 communities are at risk.

“We call that jack straw timber — like taking a box of wood matches and throwing them down. That’s what that timber looks like — it’s in every different direction,” Karels said. “It’s an extremely dangerous situation.”

The agency has cleared 720 miles of roads and firebreaks thus far, “the vast majority of that on private land,” he said. “But that’s only a small, small portion of where we need to be able to get access.”

Additionally, storm-stressed trees are subject to damage from the Southern Pine Beetle. “Not only does it further impact the rural economy, it increases the fire threat,” Karels said. “If we don’t start to remove that debris, we’re going to see catastrophic fires.”

Following the meeting, Chief Financial Officer Jimmy Patronis, who hails from Panama City and travels frequently to the Michael zone — and who doubles as State Fire Marshal — worried to reporters that too little attention is being paid to the clogged waterways.

“Water has to go somewhere,” he said. “If you can picture your slow-draining shower drain — this is exactly what’s happening right now. Our drains are clogged. And as the drains are clogged, the water has nowhere to go.”

Flooding results, he continued. And with fewer live trees to drink up the rainfall, the danger of erosion grows.

“Its so critical the DEP is given the resources to do their job and clean up our waterways, because we need the water to flow,” Patronis said.

State and federal aid efforts — “all those things are giving comfort,” he said.

“But local county commissioners right now are looking at stacks of bills and they’re trying to figure out, ’What can I pay? What can I not pay?’

“Knowing that you’ve got $100 million of debris that has to be paid for — it gives these men and women sleepless nights.”