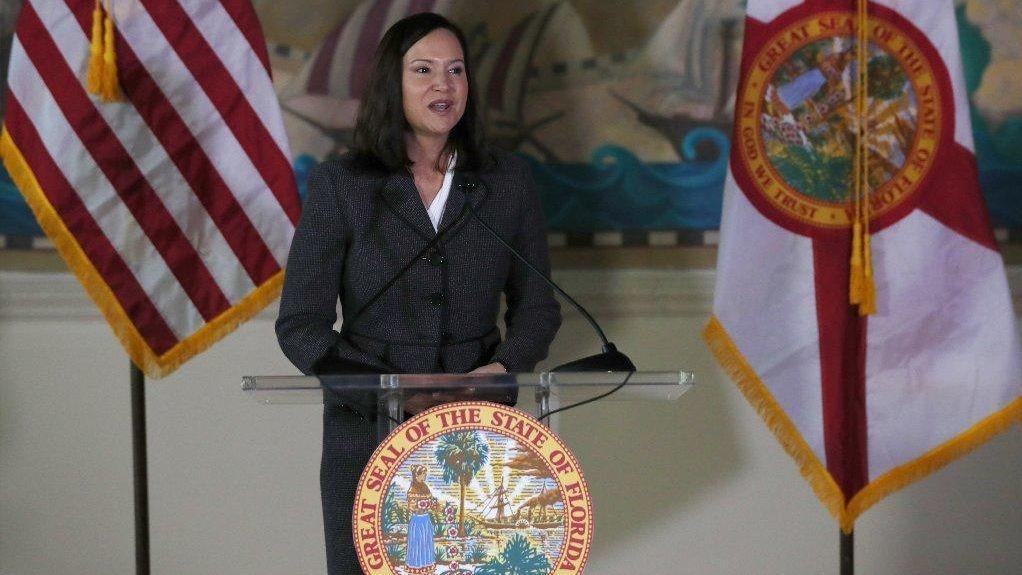 Attorney General Ashley Moody outlined several-high-profile plans Wednesday, as she spoke to local lawmakers at a gathering of the Florida Association of Counties in Tallahassee.

Moody was one of several state-level officials to address the gathering at the Challenger Learning Center. The Attorney General discussed several topics, including her goals to combat the opioid epidemic as well as cutting down on human trafficking within the state.

But Moody began by recounting her time as a judge, discussing her aim to impact the local areas where she served.

“I loved the idea that you really played such a large role in the stability of your community and counties by taking chaos or disorder, applying a set of rules or the law, and on the other side of that was an order,” Moody said.

Moody became the youngest elected judge in the state back in 2006, when she won the race for a circuit court judge spot in Hillsborough County at age 31.

Now, as the state’s Attorney General, Moody said working with local governments to battle the opioid crisis is a primary focus. And while she’s the state’s top cop, Moody argued ramping up law enforcement efforts won’t be enough to fix the problem.

“As you’ve heard, and many people say this, we won’t arrest our way out of this,” Moody said.

“From the moment I started as a candidate, we were losing 14 people a day to the opioid epidemic in Florida alone. From the time that it took for me to go from saying, ‘I am a candidate,’ to now becoming the 38th Attorney General, we now lose 17 people a day. And the projections are that is going to keep increasing unless we, as a state, can start making progress and using data-based approaches to aggressively attack this epidemic.”

Moody referenced a task force that’s been set up within her office to serve as a resource for local communities to have access to best practices when it comes to dealing with opioid addiction.

“We’ll make sure that when we do dedicate precious resources, when counties have precious resources, they can go to a group that has done the research, that has put in the work, and made sure that we can say to you with confidence, ‘This should have an effective return rate. You will see progress if you dedicate your funds in this particular area.'”

Moody also addressed efforts to reduce levels of human trafficking in the state. The Legislature is moving multiple bills to deal with the issue as well.

“What I’ve been doing since I started is going through each circuit to make sure we have an active task force within that is working together with all of the counties that are within that circuit so that there is a one-stop-shop that can effectively address when human trafficking is identified in your counties,” Moody said.

“I have noticed that this is not always the case. I’ve also noticed that many counties want to do something on their own. But I want to make sure they know that we have an umbrella, a structure, in which, in each circuit, we should be working together through a unified group.”