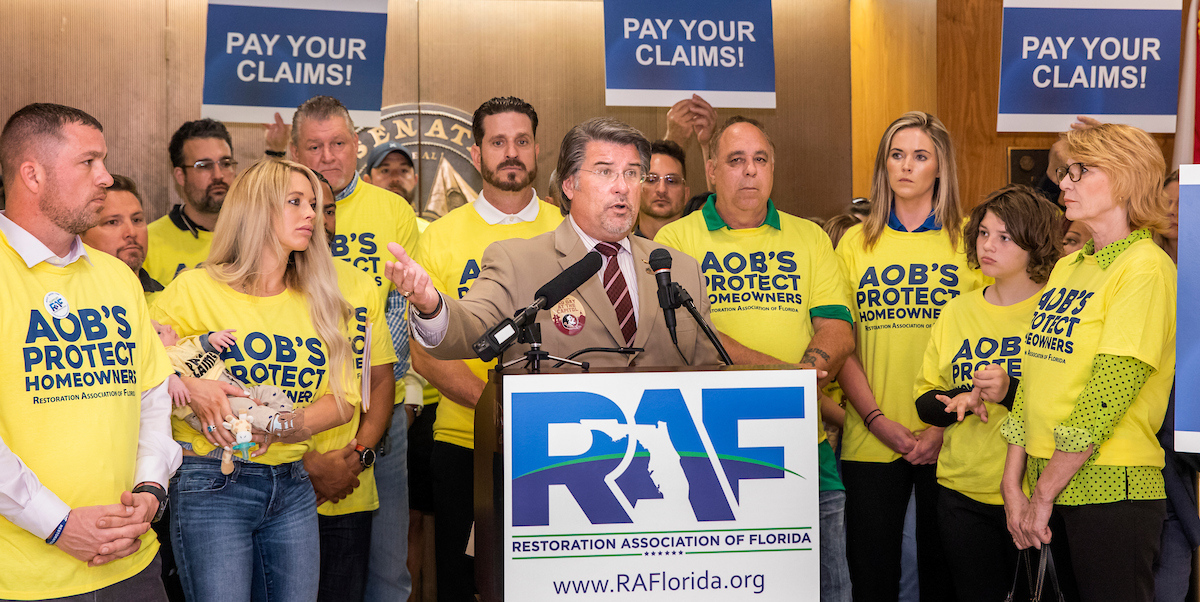 The pushback came one day before the House takes up its AOB reform package.

A legislative push to change assignment of benefits (AOB) laws have pitted players like insurance companies and contractors against restoration vendors and lawyers.

But now homeowners, speaking on behalf of the Restoration Association of Florida (RAF), are weighing in.

Residents from different parts of the state spoke out against AOB bills at the Capitol on Tuesday, one day before the House takes up its version (HB 7065) on the floor.

RAF contends that AOB isn’t the culprit for the uptick in lawsuits and increased insurance premiums that lawmakers have sought to curb. Instead, the group alleges insurance companies are at fault for underpaying, delaying or not paying claims.

Some homeowners on hand took issue with the proposed legislation because it would not address insurers’ use of “preferred vendors.”

“They told me my home repairs were completed when I still had black mold growing behind my cabinets and my daughters were diagnosed with mold-related respiratory issues,” Allewelt said.

“Preferred vendors are preferred for a reason,” Farmer said. “They get retained and they get kept onboard because they’re lowering costs.”

The House measure seeks to stop what has been described as AOB “abuse” by making it more difficult for contractors to collect attorney fees in lawsuits. It would also allow insurers to offer cheaper premiums for policies that do not assign benefits.

Edie Ousley, VP of public affairs at the Chamber, said RAF is a “front for trial lawyers and remediation vendors.”

“We urge lawmakers to see through these schemes and support legislation to stop the abusive practices that are benefitting a cottage industry of bad actors at the expense of Florida’s home and auto owners,” Ousley said.

But Farmer said that attorneys are a “great equalizer” between insurance companies and contractors and homeowners. He also suggested that restricting attorney fee payment does not address the issue.

“Without the threat of paying attorneys fees, insurance companies are just going to deny and delay claims with impunity, dare you to take them to court,” Farmer said. “Three, four years later they end up paying out only that which they were supposed to pay out initially.”

nextRestriction on petition gatherers for amendments moves forward in Senate