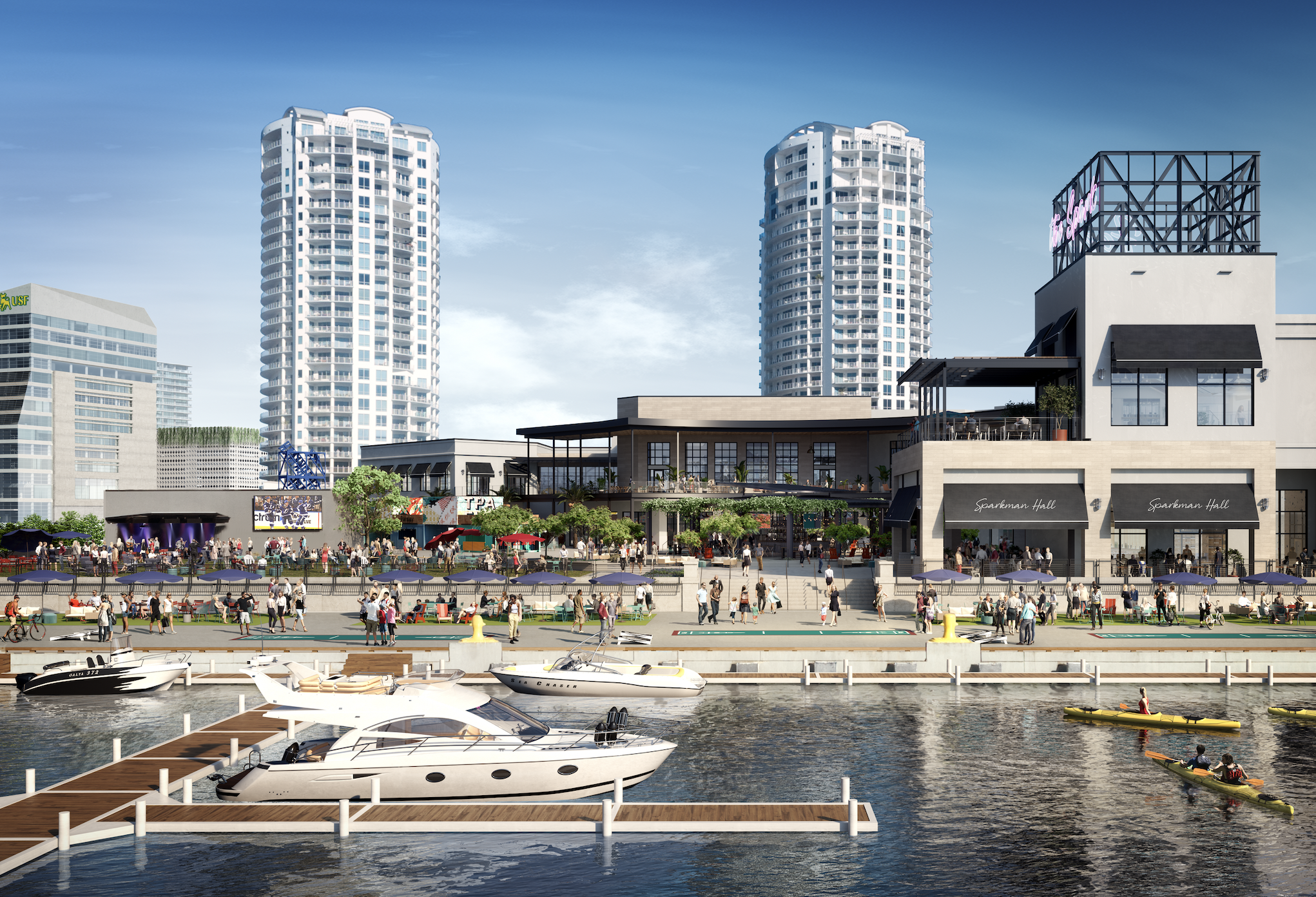 Strategic Property Partners is offering a first glimpse into what its completed Sparkman Wharf will look like. The latest renderings released Tuesday show a trendy waterfront destination boasting restaurants, bars and retail along with loft-style workspaces.

The entertainment district already under construction opened its dining garden and recreational lawn late last year, which is home to ten different restaurant concepts, the Fermented Reality Biergarten and Splitsville.

“Sparkman Wharf aims to provide Tampa with a comfortable community gathering place along the waterfront, and we intend to continue celebrating the culinary talent, craft beer, music, arts and cultural scene that our amazing city provides — all in one place,” said SPP CEO James Nozar. “The addition of new retail and office spaces at Sparkman Wharf will further enrich and welcome the community and new businesses, and with such strong initial success of the park that recently opened, we believe there is significant additional potential at Sparkman Wharf along Tampa’s waterfront.”

SPP is transforming what was once Channelside into a waterfront destination for both office space and entertainment.

The ground floor will accommodate about ten new retail establishments with 150,000 square feet of creative office space above.

SPP is upgrading the existing structures at Sparkman Wharf with a new roof and new mechanical, electrical and plumbing systems. They’re also upgrading the building’s stucco facade to match new development including by adding wood paneling and expansive windows.

The new two-story office lobby will be along Channelside Drive, providing a centralized front door and direct access.

Offices will include 40-foot ceilings and windows to let in abundant natural light. Offices will also overlook the waterfront, and feature approximately 10,000 square feet of private outdoor terraces. Office tenants will have access to private and secure on-site bike storage, as well as private facilities with showers.

Designers included those plans to encourage workers to use alternative transportation.

SPP will locate its company headquarters within Sparkman Wharf, assuming approximately 30,000 square feet of office space for staff and for an interactive marketing center for the nearby Water Street Tampa development.

“The office space at Sparkman Wharf will be a game-changer for the Tampa Bay market and will introduce an entirely new working environment that is unlike anything else in the city,” Nozar said. “As the first new office space that we’re opening in the neighborhood, Sparkman Wharf will provide employers and employees with a well-rounded lifestyle that reflects what Water Street Tampa is all about: access to a variety of dining options, a premium waterfront location and regular programming within the park.”

Fitness will also be a focus for the new retail spaces, which will complement Sparkman Wharf’s programmatic emphasis on providing amenities for well-being, from yoga to the inaugural CAMP Games.

Some short-term upgrades are underway and Sparkman Wharf including improved pedestrian facilities along Channelside Drive, and new security fencing along the waterfront. SPP is also working to extend Sparkman Wharf’s operating hours which is currently open from 11 a.m. to 11 p.m., Tuesday through Sunday.

Marked, signalized crossings along Channelside Drive were added to better connect the Channel District neighborhood to the waterfront and facilitate foot traffic to the Port Tampa Bay Garage.