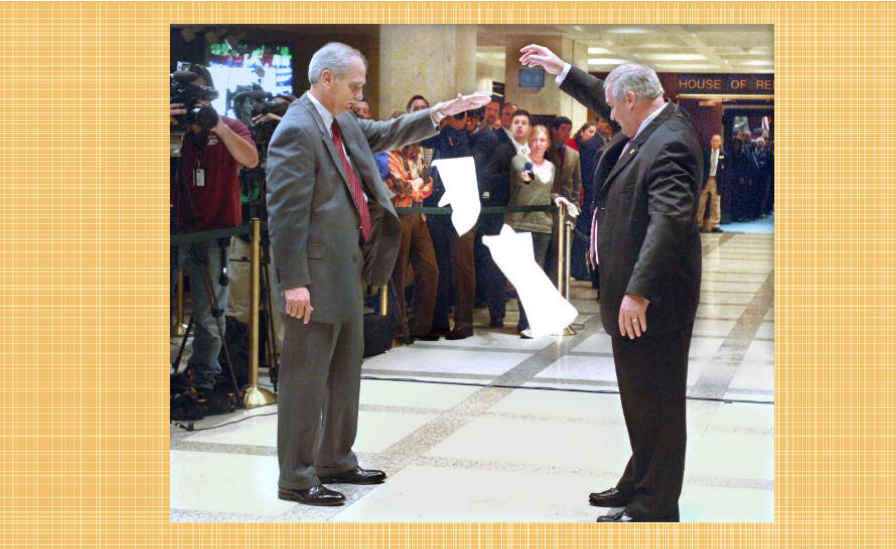 In Florida, traditions focus on colors: Pink, red and white.

Tallahassee is devoted to certain traditions on “Sine Die,” the final day of the yearly Legislative Session, but it’s the not the only state that’s had them.

In Idaho, capital reporters used to wear ugly ties near Session’s end to “encourage legislators to finish their business quickly and go home,” according to a Legislative Research Librarians newsletter.

In the Magnolia State, Mississippi State University lobbyists would put tomato seedlings “on the desks of legislators, staff members and sometimes statehouse reporters.”

“The tradition started several decades ago after university researchers engineered a robust tomato plant capable of traveling well,” according to a Stateline blog post. “Proud of their development, they sent some to the Capitol, where the tomatoes were a hit.”

In Georgia, lawmakers once tossed ripped paper into the air above their desks, and in Alabama, legislators gave a “shroud” award to the bill deemed least likely to pass.

Pink, as in the color of ties, sport coats, dresses and flowers worn by lobbyists, lawmakers and others, especially as they mill about in the 4th floor Rotunda between the two chambers.

The wearing of pink, for those who still remember the reason, is to honor the late insurance lobbyist Marvin Arrington, who would wear a pink sports coat on the last day of Session.

Arrington died the last week of the 2002 session, succumbing to a heart attack in his car near the Capitol. (For a story on that tradition, click here.)

The red refers to the same-colored Solo cups ubiquitous on the last day. Capitol Police frown on the drinking of alcohol in the building, so (mainly) lobbyists sneak their tipple in the plastic chalices — though now it’s pretty much an open secret.

(Even though Sine Die won’t happen till Saturday afternoon this year, don’t be surprised if you still see some red cups Friday, depending on how late both chambers go.)

And white, as in the handkerchiefs that are ceremonially dropped by the House and Senate sergeants-at-arms to mark the precise moment of session’s end.

As the State Library and Archives of Florida explains, in the pre-technology days in the Old Capitol, the presiding officers of each chamber couldn’t see each other and weren’t in communication by phone.

“The House and Senate sergeants would stand in the rotunda where they could be observed by the Senate President and House Speaker,” the website says. “The sergeants would drop a handkerchief at the moment agreed upon for adjournment and the gavels would fall in each house to formally signal the end of the session.”

To be sure, that tradition took a hit in recent years.

In 2011, the chambers were at odds over a flurry of competing priorities, including claim bills and tax breaks. They adjourned separately in the wee hours of the morning, eschewing the traditional joint “hanky drop.”

And in 2015, the House went home three days early after the chambers deadlocked over health care funding, specifically whether to expand Medicaid coverage, forcing a Special Session to finish the 2015-16 state budget.

This Session, Easter weekend caused a delay in finishing the budget in time for the constitutionally mandated 72-hour “cooling off” period, causing the Saturday Sine Die, but there’s no hard feeling as in previous years.

Ed. Note — A version of this post was published previously.