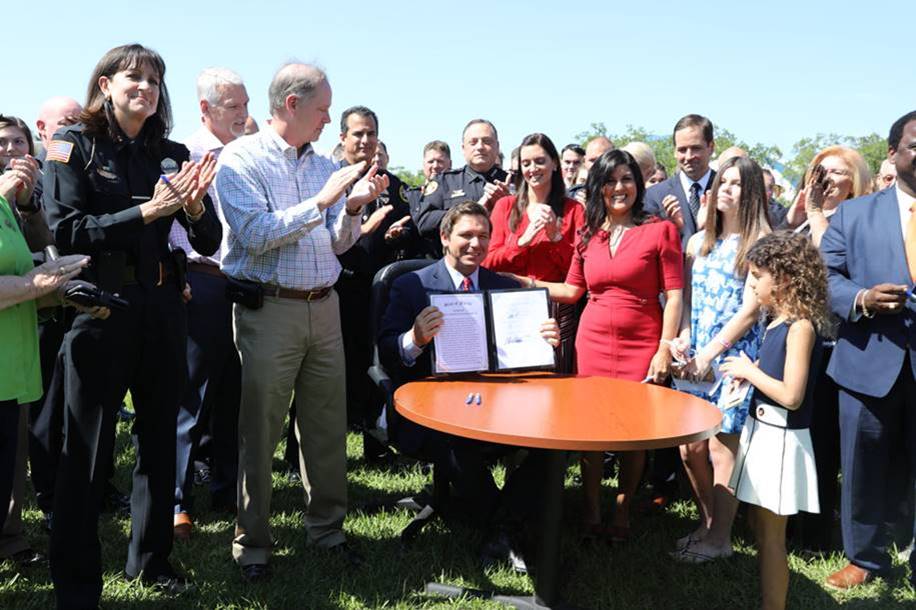 "I think it's something that's appropriate, I think it'll make our roads safer."

Police can soon pull over Florida drivers who text while driving.

“You can see people lose control of the vehicle, and we don’t want to put people at risk,” DeSantis said.

In addition to banning texting and driving in Florida, the bill will also make school zones and active work zones hands-free areas.

“We have a responsibility to all Floridians to limit distractions that cause tragedies on our roads,” Lt. Gov. Jeanette Nuñez said.

“This bill is about protecting our residents and preventing as many accidents as possible through smart enforcement and I’m proud to stand with the Governor in this effort.”

Reps. Emily Slosberg and Jackie Toledo sponsored the House version. Slosberg’s twin sister, Dori, was killed more than 20 years ago in a car crash, where the now-state-Representative was also seriously injured.

“My family lives with this tragedy every day,” Slosberg said in a statement on the bill’s signing.

“I want to ensure that others will not go through the pain I went through of losing a loved one on our roadways because of dangerous conduct. This bill will change driver behavior and it will save countless lives on Florida’s roadways. I want to thank my colleagues for their support in moving towards making our roads safer and the Governor for signing the bill into law.”

A bill bumping texting to a primary offense died in the Senate last year after earning overwhelming approval in the House.

Toledo was present at Friday’s bill signing and spoke out on the legislation finally being signed into law.

“As a mother, the safety of our children and our communities is paramount,” Toledo sad.

“This bill is about saving lives by preventing accidents caused by texting while driving among other distractions on our roads.”

Praising the new law was Terry Rhodes, executive director of the Florida Department of Highway Safety and Motor Vehicles (FLHSMV).

“Using wireless communication devices while driving is one of the most dangerous driving behaviors as it takes your hands off the wheel, eyes off the road and mind off driving,” Rhodes said in a statement. “The Wireless Communications While Driving Law will undoubtedly make the state’s roadways safer and I applaud the Governor and Legislature for their dedication to this effort.

“Through educational campaigns and Florida Highway Patrol enforcement in conjunction with our law enforcement partners, this law will enhance all of our missions to prevent crashes, reduce injuries and fatalities, and improve road safety for all road users,” she said.

State Rep. Richard Stark, who has long been a proponent of the change, also released a statement.

“For too many years Florida has had one of the weakest texting while driving laws in place which placed our residents at a significant safety risk on our roads,” Stark said.

“As a former sponsor of the measure for many years, I know the hard work it took to see the texting and driving ban through to the finish line.”

previousDebra Kaplan files for rematch with Jennifer Sullivan in HD 31