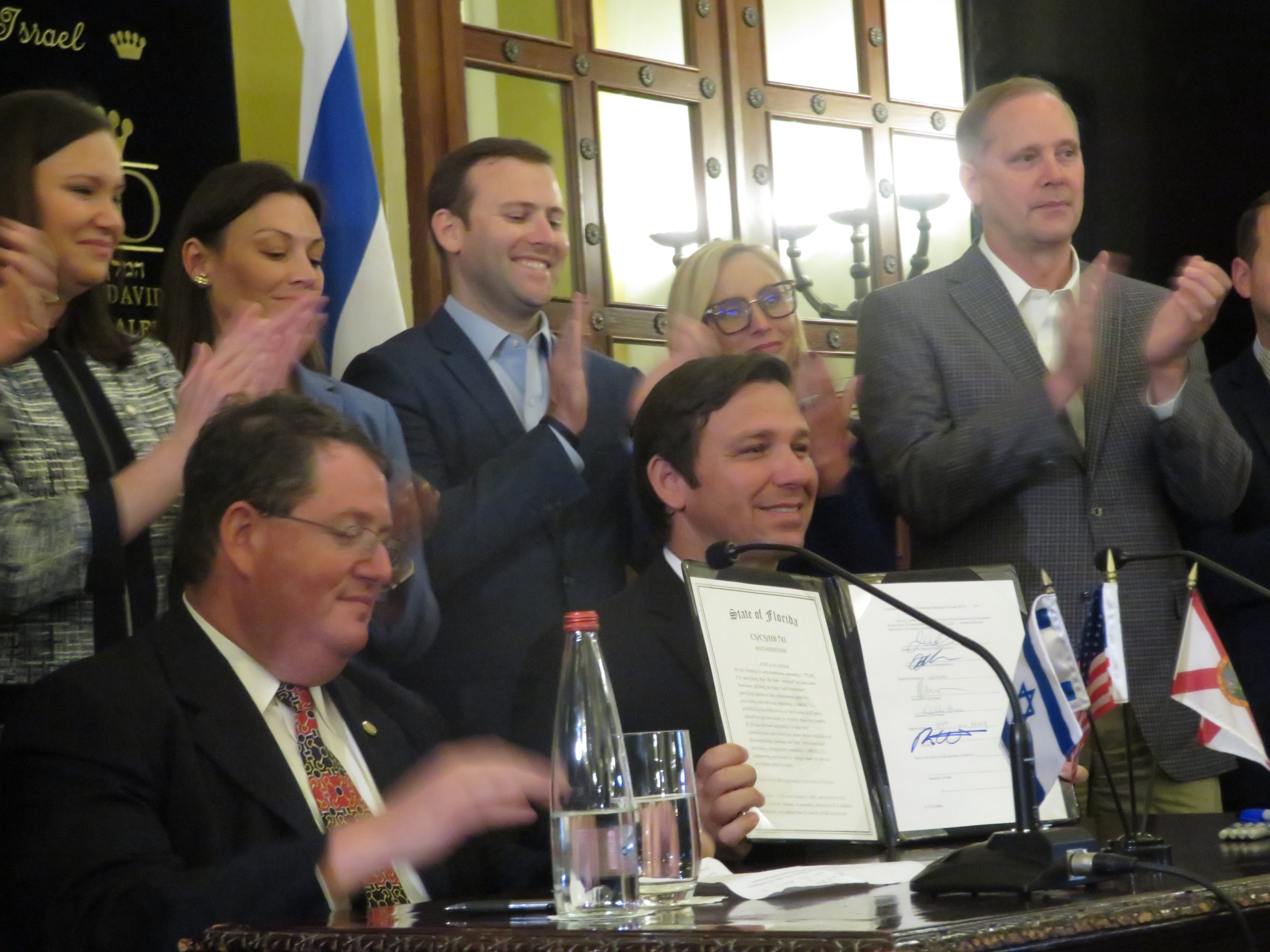 The first bill signed in Florida history on foreign soil.

The legislation was effective upon signing, the first bill in Florida history signed on foreign soil.

The Governor was flanked by leading legislators and Cabinet members, a symbol of the enthusiastic support for this legislation among elected officials.

By his side while he signed the bill was state Rep. Randy Fine, the House sponsor of the legislation whose efforts were key to the bill becoming law.

Fine, who is Jewish, told a story about how he was in seventh grade and failed algebra because he missed a test on Yom Kippur, which his teacher said wasn’t a real holiday.

“I swore when my boys were born that wouldn’t happen to them,” Fine said before recounting stories of anti-Semitic words and deeds in public schools today.

“Every single member voted for this without a no vote,” Fine said, “because of the men and women they are.

DeSantis noted that there was “uniform agreement” in standing against anti-Semitism.

“This bill is very clear about what we’re talking about,” DeSantis said, regarding use of tax dollars in public education institutions.

“I think it sends a strong statement about where Florida is,” the Governor added, noting security funding in the new budget.

The bill was framed as a deterrent measure by the Governor, against institutions or rogue instructors “trying to spew anti-Semitism.”

“It is limited to the K-20 context … it’s got to be administered consistent with the First Amendment,” the Governor added.

Added Fine: “Whatever the policy is regarding race, [schools] have to treat anti-Semitism the same way,” regarding such content in classrooms.

Fine also noted the bill does not ban criticism of Israel, but “when you single out Israel … or use anti-Semitic quotes, that is anti-Semitic.”

Holocaust denial is another example of anti-Semitism: “What interest does a Florida education institution have in hiring somebody who denies the Holocaust,” the Governor added.

Lawmakers passed the bill (HB 741) unanimously last month and sent it to DeSantis’ desk last week. He has long been expected to sign the bill during the Israel trip.

The law adds religion as a protected class in the state education system. It requires any religious discrimination against students or employees to be treated in the same manner as other protected classes.

Most lawmakers agreed with the core of the bill, sponsored by Fine, though it was not without controversy.

Notably, Senate Democratic Leader Audrey Gibson of Jacksonville voted against the measure in committee, citing the bill’s focus on anti-Semitism rather than broader religious discrimination. She later reversed her stance, though others have echoed those concerns since the bill’s passage.

In late April, a group of about 30 prominent Jewish Floridians sent a letter to DeSantis saying the bill goes too far by equating criticism of the Israeli government with anti-Semitism.

Their opposition is based on the examples of anti-Semitism included in the legislation, such as “[a]pplying a double standard to Israel by requiring behavior of Israel that is not expected or demanded of any other democratic nation, or focusing peace or human rights investigations only on Israel.”

Fine has brushed those concerns aside: “There are 700,000 Jews in Florida. The fact that 32 don’t want to ensure their own children and grandchildren be protected in school is disappointing, but not news,” he said at the time.

On Friday, DeSantis followed up the ceremonial signing by putting his signature on the bill stateside.

“I’m proud to sign this bill to make clear through a bipartisan effort that anti-Semitism has no place in our state and our educational institutions will not tolerate discrimination against the Jewish people,” he said.

“I was especially proud to hold a ceremonial bill signing in Jerusalem. Florida is the most Israel-friendly state in the country and as long as I’m Governor, we will continue to stand with the Jewish community.”

“The rise of anti-Semitism and the recent attacks against Jewish Americans throughout our country are appalling and unacceptable,” Gruters said.

“By signing this bill into law, Florida is sending a clear message that anti-Semitism and discrimination will not be tolerated or overlooked. I thank the Governor and the members of the Legislature for taking decisive action to address this issue head on.”

previousTakeaways from Tallahassee — That time of year

nextDonald Trump to launch re-election on June 18 in Orlando