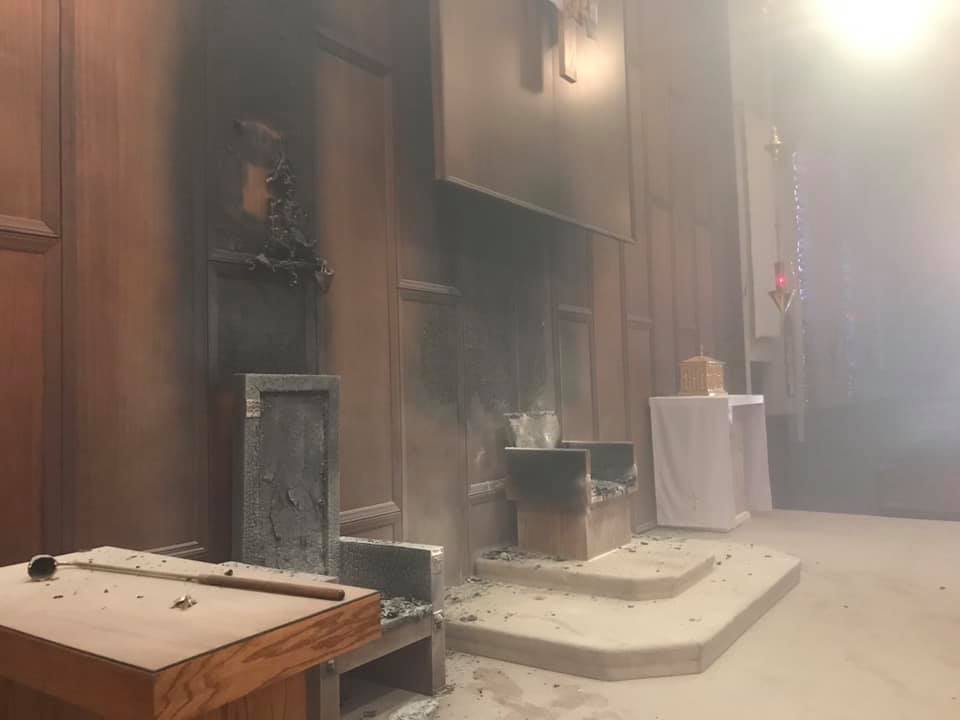 "We are hurt, upset, and deeply saddened."

The Roman Catholic church in Tallahassee that celebrates a “Red Mass” for lawmakers every year was damaged in what state arson investigators say looks like an “intentionally started” fire.

The Co-Cathedral of St. Thomas More, on West Tennessee Street opposite the Florida State University campus, was burned some time Wednesday afternoon. News of the fire spread on social media.

In a Thursday Instagram post, the church noted that the “presiders’ chairs were set on fire and are destroyed. The walls of the sanctuary are charred and there is smoke damage. Thankfully, no one was hurt. An investigation is underway.”

“Initial arson investigations determined that the fire appears to have been intentionally started,” according to CFO and State Fire Marshal Jimmy Patronis‘ office.

The church is known for hosting a “Red Mass of the Holy Spirit” every Legislative Session to “pray for divine inspiration and guidance for those serving in the executive, legislative and judicial branches of government and for members of the legal profession.”

Thursday’s post added that “we at the Co-Cathedral would like to thank everyone for their prayers in this difficult time. Please continue to pray for our priests, our parish family, and all those working to ensure we are able to celebrate our weekend masses in the church.

“We are hurt, upset, and deeply saddened, but we continue to place our hope in Christ during this Easter season in which we celebrate His resurrection.”

The co-cathedral’s pastor, Father John Cayer, told WCTV News his “first initial reaction to this is shock. How could this happen to a church? Having seen churches burn in the news, seeing this before, I didn’t ever think that this would happen to our church here.”

He also told the station the chairs were set ablaze with “some sort of accelerant.”

“We are going to get through it. This is not where it ends. We are very hopeful for the future,” Cayer said.

Jennifer Jankowski Green, a Tallahassee-based lobbyist and church member, said she has “been going to this church since college in 1992.

“Ray (her husband) was baptized and became Catholic there. We were married there. We lector there,” she wrote on Facebook. “Dear Lord help us if this is a hate crime. Why would someone do this to any place of worship? All I can say is thank God no one was injured.”

“This parish is my home,” he also wrote on Facebook. “I’m the President of the Parish Council. Our girls have learned about their faith here. It’s home to hundreds of FSU students who find community here and start a relationship with Christ.

“But our Church is more than a building,” added Williams, who previously was communications director for the Florida House. “Our Church is the people. The building will be repaired and our Church is Alive.”

The church is part of the Catholic Diocese of Pensacola-Tallahassee, led by Bishop William A. Wack. His office released a statement that duplicated the church’s Instagram post.

A diocese representative, who is not being named because the person is not authorized to speak with news media, said federal, state and local investigators are involved because the fire is a “possible hate crime.”

For example, a man “accused of setting fire (earlier this year) to three predominantly black churches in a southern Louisiana parish was charged with (state) hate crimes, adding to three charges of arson that were filed” there, the New York Times reported last month.

“In Louisiana, hate crimes include offenses perpetrated against an individual because of their race, sexual orientation, national origin, disability or other protected status,” the Washington Post explained.

According to the Florida Department of Law Enforcement, a hate crime in Florida is any “committed or attempted criminal act, by any person or group of persons, against a person or the property of another person or group, which in any way constitutes an expression of hatred toward the victim because of his/her personal characteristics,” which include “religion.”

“I am saddened to hear of an apparently intentional fire set at the St. Thomas More Co-Cathedral in Tallahassee,” Patronis said in a statement.

Cayer asked that anyone with information on the fire contact him at [email protected].